I’ve been in the Park the last several days, the first time in well over a year.  I didn’t expect to see wolves because their number is down and until Jan. 19 I hadn’t visited Lamar Valley.  Yesterday I did show up in the Lamar just after mid-day. Using my “expert wolf spotting skills,” I quickly found an unusual mid-day collection of vehicles and people with spotting scopes. It had to be a major wolf appearance. It was!

Rick McIntyre filled me in, while his scope showed me a view similar to the famous acceptance of wolf 21M by the all female Druid Pack, way back in the day, although the actual interactions were not a new acceptance ritual.

The wolves were visible under some cottonwood about a half mile away — four Druid females, who had been without an alpha male in the pack, were facing a big black. healthy-looking  male wolf.  He actually had first appeared with the pack on December 2. Then on January 17, an equally glossy black fellow joined him. They are probably brothers.  His apparent brother was bedded in the snow 50 yards away. The Druid females themselves were not the prettiest wolves because they suffer from mange. McIntyre told me it appeared to be mostly on their tails, but in fact had also infested some of their rears and bellies. Nevertheless, they are hanging on.  The origin of the two fine black wolves is not known, but the one I saw with the females seems to have become the new alpha. The Druid alpha female is thought to be a wolf informally called “white line.”That wasn’t all that was going on. Some of the Hoodoo Pack from outside the Park in Wyoming had come calling. They are also two males, likely brothers. One is 682M. I snapped a photo of 682’s brother. They too were not far from the Druids.

Finally 2 gray brothers from the Mollies Pack had come up from the south and were hanging nearby. I didn’t see them.

The presence of all these males was probably due to it being wolf mating season, but the appearance of wolves ingressing from Wyoming is most unusual. 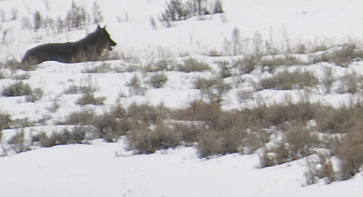 The mating season was probably the reason former long time Druid alpha male 480M had left his pack. The females were all his daughters and wolves do not like to mate with their offspring. 480M is apparently searching for a new opportunity in the area closer to Mammoth Hot Springs.

Note: this is a slightly revised story from the one I first posted Jan. 20. Rick McIntyre called and filled in a few details I had missed.

74 Responses to Some Yellowstone wolf news-