In response to the announcement on Friday March 5 by Secretary of the Interior Ken Salazar that the listing of greater sage-grouse and two of its distinct population segments (Mono Basin and Eastern Washington) under the protections of the Endangered Species Act is “warranted but precluded”, Western Watersheds Project has filed litigation in federal District Court in Boise, Idaho challenging the “precluded” portion of the finding.

The litigation charges that the U.S. Fish and Wildlife Service and the Department of the Interior violated the Administrative Procedure Act and the Endangered Species Act by finding that the listing of greater sage-grouse is “precluded”.

“The Obama administration rightfully concluded that the greater sage-grouse fully qualify for the protections of the Endangered Species Act,” said Jon Marvel, executive director of Western Watersheds Project. “Unfortunately, the administration has violated the law in not listing sage-grouse at the same time.”

The greater sage-grouse is a charismatic bird that lives in sagebrush steppe in eleven western states. First described by Lewis and Clark in 1805, nineteenth century travelers and settlers reported seeing huge flocks of sage-grouse that darkened the sky as they lifted from valley floors. However, westward expansion and development over the next 200 years has eliminated almost half of sagebrush habitat. The total sage-grouse population, estimated between 140,000-500,000 birds, has declined between 69-99 percent from historic levels. 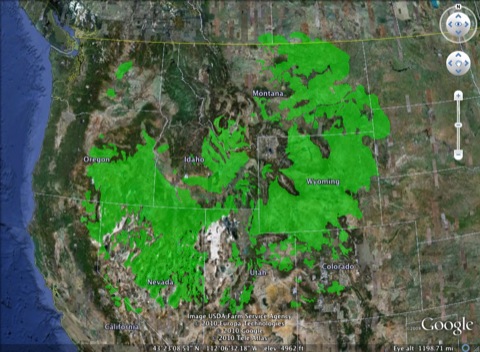 The Fish and Wildlife Service’s finding indicates that current conservation efforts are failing to conserve sage-grouse.

“The ever growing effects of development of the sagebrush sea will doom sage-grouse without the mandatory protection provided by listing the species under the protections of the Endangered Species Act.” said Laird Lucas, executive director of Advocates For The West, the Boise-based legal advocacy firm representing Western Watersheds Project in the sage-grouse litigation.