A different kind of wolf book: Niemeyer's "Wolfer" has been published

A real page-turner is available now just before the holidays-

A lot of folks have waited for the publication of Carter Niemeyer’s autobiograpy, Wolfer. It is now available from a couple sources, but Amazon.com will get it to you before Christmas. I’ve checked that out. It is also available at Amazon as a download for your Kindle.

I understand autographed copies are available at www.carterniemeyer.com/ I’m not sure they will be ready for Dec. 25, however. The book also has a Facebook site — http://www.facebook.com/pages/Wolfer/103634586341350

I read the draft and the book grabs you from the first page. It seems like Niemeyer is good at just about everything, and that includes writing his story.  It certainly needs to be told because people just don’t know what being a “government trapper” is like.  They also don’t know what it takes to change your mind about the direction of your career.

I will post a full review after the holidays when I get my final copy. 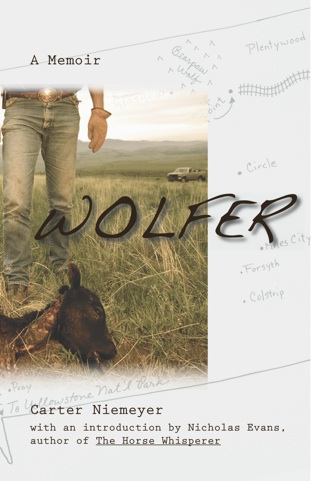 10 Responses to A different kind of wolf book: Niemeyer's "Wolfer" has been published