Harsh Winter Conditions May Lead to Repeat of 2008 Slaughter 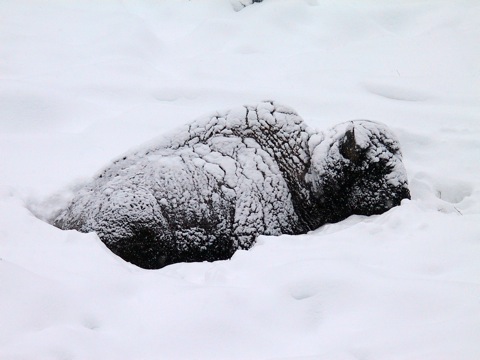 HELENA, MONTANA – A coalition of conservation groups, Native Americans, and Montanans filed an urgent motion for injunctive relief in federal court today to prevent a repeat of the 2008 slaughter of over 1400 wild bison captured on public wildlands near the border of Yellowstone National Park in Montana.

Many of the same factors that contributed to the mass slaughter in 2008, including heavy snowpack, bison population size, and the continuing agency intolerance for migrating bison, are in place this year as well.

With the Stephens Creek bison trap inside the Park already near capacity, and more bison migrating toward their natural winter range in Montana to forage at lower elevations, Park Service Spokesperson Al Nash indicated that the agencies may begin sending hundreds of bison off to slaughter whether they carry the disease brucellosis or not.  While it is concern over the possible transmission of brucellosis to cattle that is the justification offered for preventing bison from utilizing their winter range in Montana, at the present time there are no cattle present in the bison’s winter range corridor, and no risk of transmission.  And that, according to the Plaintiffs challenging the bison management plan in federal court, perfectly illustrates why the plan needs to be scrapped.

“One of the twin goals of the bison management plan is ‘to ensure the wild and free-ranging nature of American bison’,” said Tom Woodbury, Montana Director for Western Watersheds Project, “but ten years into the plan, there is still zero tolerance for bison being bison on our public wildlands.”

The Plaintiffs have been waiting for a final decision from federal Judge Charles Lovell on the merits of their lawsuit since September.  Their main contentions are that the Forest Service is legally obligated to allow bison to inhabit the Gallatin National Forest outside Yellowstone National Park, that bison management is based on politics and not science, and that repeated slaughters of substantial portions of the bison population threaten its genetic integrity.  Plaintiffs are asking the court to enjoin or restrain the agencies from lethal removal of bison in and around Yellowstone National Park, as well as the continuing use of capture facilities like the one at Stephens Creek to capture bison for the purpose of either confining them for extended periods or processing them before shipping them off to slaughter-houses.

According to one of the Plaintiffs’ experts, long-time Gallatin area resident Glenn Hockett, “The alternative to slaughter that they’ve ignored is habitat.” If freed from the trap and allowed to access their winter range, according to Hockett, bison would pose little or no real problem.

“There is no good reason to slaughter these magnificent creatures when substantial conflict-free winter range habitat is available to these bison outside the Park at this time both on public and private land,” Hockett, a professional range ecologist and Volunteer President of Gallatin Wildlife Association said.  Hockett informed the court that “thousands of acres of cattle-free, critical winter range habitat is available to bison in the direction the trapped bison are migrating towards on both public and private land, near Dome Mountain,” including more than 5,000 acres on the Gallatin National Forest, 5,000 acres on the bison-tolerant Dome Mountain Ranch, and nearly 5,000 acres in the Dome Mountain Wildlife Management Area.  Hockett also informed the court that the only two ranchers with cattle in the area this time of year, Hank Rate and Bill Hoppe, are not opposed to free-roaming bison.

“Who exactly are the agencies serving by repeating the senseless slaughter of 2008?” Hockett asks.

Rosebud Sioux tribal elder Rosalie Little Thunder, chairperson for Plaintiff Seventh Generation Fund, expressed the Native American perspective on the prospective slaughter. “The continuing slaughter of wild buffalo by the National Park Service is an affront to indigenous peoples,” Little Thunder said, “and an abrogation of the government’s trust responsibilities to the American people and American Tribes.”

According to the motion filed Wednesday in Helena:

“Years of mass bison removal  led Park Service biologists to register concerns about the adverse impacts the removals and population fluctuations have on the genetics, social structure, and population demographics of the bison population, and they have warned that continuing those removals could result in irreparable harm. The Park Service further documented stress, injury and harm to bison when they are held in confinement at the Stephens Creek trap for release months later.”

Attorneys for the federal agencies have indicated to Plaintiffs that they will file a response on Monday, and the Court is expected to rule promptly thereafter.  Should Judge Lovell deny their request, Plaintiffs have the option of proceeding immediately to the Circuit Court of Appeals for emergency relief.

The Yellowstone bison population includes America’s last continuously wild herds, and is the last population that still follows its migratory instincts.  As unique native herbivores that evolved across the North American continent, scientists believe bison can help restore the native grasslands, sagebrush steppes, and prairie ecosystems that are considered to be some of the most endangered habitats in the world.

PLAINTIFFS ON THE SUIT:

WESTERN WATERSHEDS PROJECT is a regional, membership, not-for-profit conservation organization, dedicated to protecting and conserving the public lands and natural resources of watersheds in the American West.  WWP has its headquarters at the Greenfire Preserve in Custer County, Idaho; and is supported by more than 1,400 members located throughout the United States, including in Montana.     WWP’s Montana office is in Missoula, and it also has offices and other staff in Boise, Hailey, and Salmon, Idaho, Wyoming, Utah, Arizona, and California.  Through these staff, and with the assistance of numerous unpaid members and supporters, WWP is deeply involved in seeking to improve livestock grazing management on federal and state public lands, including on the federal lands at issue in this case.  WWP is also involved in seeking to protect native wildlife and their habitat across the west, including bison and sage grouse.

BUFFALO FIELD CAMPAIGN is a non-profit public interest organization founded in 1997 to stop the slaughter of Yellowstone’s wild bison, protect the natural habitat of wild free-roaming bison and other native wildlife, and to work with people of all Nations to honor the sacredness of the wild bison.  BFC has its headquarters in West Yellowstone, Gallatin County, Montana, and is supported by volunteers and participants around the world who value America’s native wildlife and the ecosystems upon which they depend, and enjoy the natural wonders of our National Parks and Forests.

TATANKA OYATE is a project of the Seventh Generation Fund, an Indigenous nonprofit organization dedicated to promoting and maintaining the uniqueness of Native peoples throughout the Americas. Tatanka Oyate works to protect and restore the habitat of the last wild bison population in Yellowstone and create awareness for protecting and preserving sacred species in the plains region, an area of special significance to Native cultures.  Tatanka Oyate was organized specifically to find the means to protect the genetically unique Yellowstone bison population.

GALLATIN WILDLIFE ASSOCIATION is a non-profit wildlife conservation organization based in Gallatin County, Montana.  GWA represents concerned hunters and anglers in Southwest Montana and elsewhere.  GWA is an affiliate of the Montana Wildlife Federation, which is an affiliate of the National Wildlife Federation.                   GWA is supported and run by volunteers, who advocate for adequate habitat for native wildlife, and opportunities for the public to view, hunt, and otherwise enjoy such wildlife and public lands.

NATIVE ECOSYSTEMS COUNCIL is a non-profit Montana corporation with its principal place of business at Willow Creek, Gallatin County.  Native Ecosystems Council is dedicated to the conservation of natural resources and the preservation of the Gallatin National Forest.  NEC has participated extensively in administrative actions to protect these forests from environmentally damaging plans and activities, and to protect native wildlife and their habitat.

MEGHAN GILL is an individual who resides in Missoula, Montana in Missoula County.  Gill is a former volunteer and staff member of the Buffalo Field Campaign, and has been concerned about and involved with the issue of bison management for several years.  Since 2000, Ms. Gill has annually visited areas in and around Yellowstone National Park for the express purpose of viewing bison and other native wildlife in their natural habitat, and for advocating for their right and need to have year-round access to habitat outside of YNP.

DANIEL BRISTER is an individual who resides in Arlee, Montana in Lake County.  Brister is a staff member of the BFC, and has been involved with bison advocacy since December, 1997.  Mr. Brister travels to West Yellowstone regularly to conduct work for BFC, and to view wild bison in their native habitat.  Mr. Brister first visited YNP in 1992, and was particularly moved by seeing wild bison in the area.  He derives aesthetic, spiritual, cultural, and recreational enjoyment and benefits from viewing wild bison undisturbed in their native habitat, and his interests and enjoyment of the wild bison are injured by the agencies’ management actions that harm the bison, and threaten the future integrity of bison populations in the GYE.

Buffalo Field Campaign is a non-profit public interest organization founded in 1997 to stop the slaughter of Yellowstone’s wild bison, protect the natural habitat of wild free-roaming bison and other native wildlife, and to work with people of all Nations to honor the sacredness of wild bison.  BFC has its headquarters in West Yellowstone, Montana, and is supported by volunteers and participants around the world who value America’s native wildlife and the ecosystems upon which they depend.