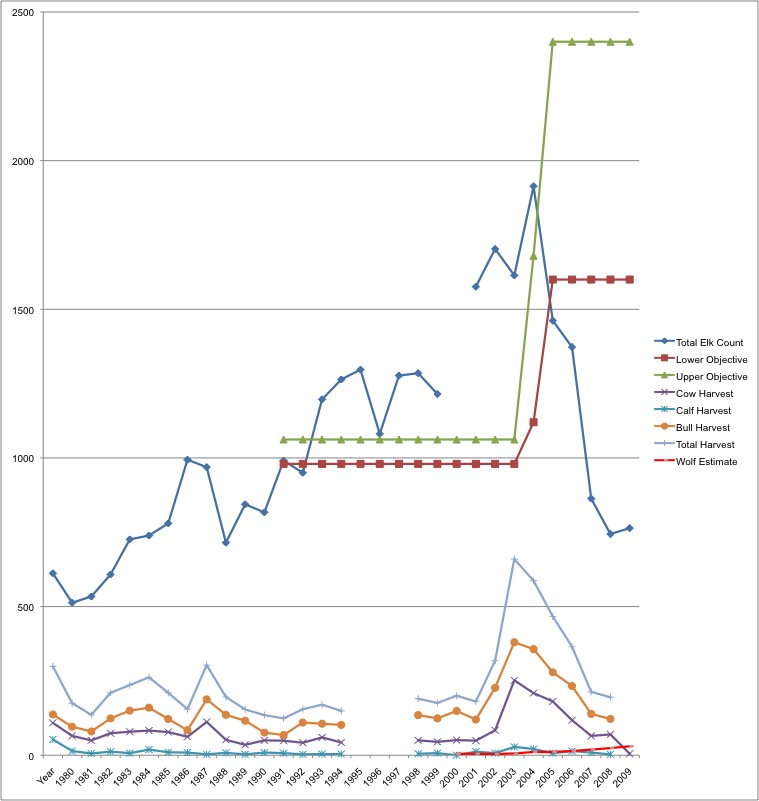 The US Fish and Wildlife Service has issued an Environmental Assessment for Montana Fish Wildlife and Park’s wolf reduction proposal for the Bitterroot hunting district HD250 just southeast of Hamilton, Montana.  In the proposal to kill all but 12 wolves in the district, they claim that wolves are responsible for declines that they have seen in the district and that they are causing “unacceptable impacts” elk population there such that they can no longer meet the objectives they have set there.

While the elk population has declined it should be noted that there was a sharp increase in harvest of all classes of elk in the area after wolves were documented even though as one of the peer reviewers says “[t]here is strong evidence that female harvests need to be reduced when wolves are present (for example, see Nilsen et al. 2005, Journal of Applied Ecology)”. The elk count objectives for the area were also drastically increased to levels far above what the area had previously supported and harvest levels remained high as well.

There is also very little information about the population of bears and mountain lions which also take elk.  Bears, in particular, take very young elk and can have a very large impact on elk populations.

Whether or not killing large numbers of wolves and other predators is effective in increasing elk populations is still debatable but it seems apparent to me that the FWP is blaming wolves for their poor management of elk and that their objectives were based on more wishful thinking rather than what was actually possible.

You can find the EA here on the right under “State Proposals to Control Wolves Unacceptably Impacting Ungulate Herds” http://www.fws.gov/mountain-prairie/species/mammals/wolf/

Written comments can be submitted online at http://www.regulations.gov