Q-Fever on the Rise in 2 Western States Many Jackson Hole, YNP campgrounds and roads still closed

Why does this economically modest and destructive economic activity get so much priority?

A recent report published by the Department of Interior demonstrates what conservation advocates have been arguing for years:  Recreational use of public lands creates many more jobs and much more economic value than public lands ranching.

Despite the staggering disparity in economic value of these competing land uses, the Bureau of Land Management continues to manage public lands to benefit public lands ranching above and beyond all other uses.

This emphasis on ranching frequently results in degraded conditions that reduce or even ruin recreational opportunities, displace wildlife, muddy and infect formerly pristine creeks, and ruin the scenery that attracts people to the great outdoors.

Nobody wants to pitch a tent in cow waste, have their trip cut short by E. coli, giardia, or campylobacter or try to admire the view when it smells like a feedlot. 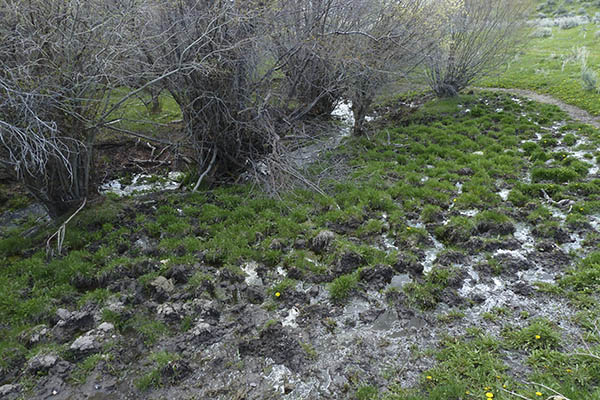 In the photo above, cattle were put back on this already trampled grazing allotment just 3 weeks after the photo was taken.

7 Responses to Not even close . . . jobs from recreation on public lands versus jobs from public land ranching