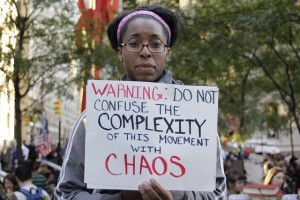 Many reasons for discontent

The Occupy Wall Street (#OWS) movement is growing across the country and world despite the Mainstream Media’s best executed attempts to ignore, minimize, and obscure its common voice.  Similarly, messaging from the powers-that-be continues to suggest that the demonstrators aren’t even crystal clear on what they’re demonstrating.  Not true.

They never quite get to the part explaining that a great deal of the beauty of this groundswell is in the solidarity of its message despite the broad diversity of interests engaged in its expression.

The disproportionate privilege enjoyed by the few in this country unjustly affects the middle-class, students, labor, minorities, and yes : our natural environment and shared public values – i.e. the few who hold power always seem to trump the will of the many.  That’s not what democracy is supposed to represent.  It seems to me pretty clear that this inequality is what’s being protested.

Unlike the Tea-baggers, who enjoyed a great deal of media coverage and supportive speculation regarding a political agenda that favored far-right anti-government/regulation interests, the #OccupyWallStreet movement continues to be pooh-poohed by talking-heads and media pundits as disorganized, lacking a specific agenda, yada…yada…yada…  Criticisms such as these do little more than carry the 1%ers water in seeking to highlight disparate interests, to crack the commonality of the movement among a broad and growing number of citizens who are standing in solidarity against a skewed political system ultimately responsible for a diversity of grievances.  If we’re different we’re less likely to stand together – or that’s what they’re hoping at least.

Where should this leave public land and wildlife advocates ?

It puts us right in the middle. 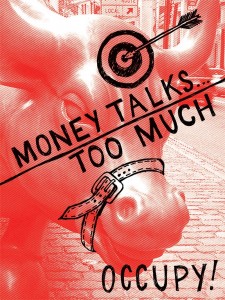 The first official Declaration of the Occupation of New York City articulated some of the many facets of this movement, including environmental and animal rights concerns. Here are a few highlights:

“As we gather together in solidarity to express a feeling of mass injustice, we must not lose sight of what brought us together. We write so that all people who feel wronged by the corporate forces of the world can know that we are your allies..

They have poisoned the food supply through negligence, and undermined the farming system through monopolization.

They have profited off of the torture, confinement, and cruel treatment of countless nonhuman animals, and actively hide these practices…

They have purposely covered up oil spills, accidents, faulty bookkeeping, and inactive ingredients in pursuit of profit…”

The Sierra Club has recently jumped on board sending an email message to its staff and activist members encouraging their participation in Occupy Wall Street protests as representatives of the Club:

For the past several weeks Occupy Wall Street protesters have peacefully held vigil in support of a broad vision for financial, political, and environmental reform in America. From this creative hub of activity, a diverse group of students, members of labor unions, environmentalists, and concerned citizens have helped this grassroots protest spread to more than 1,400 events nationwide. Many Sierra Club staff and volunteer leaders have participated in and/or lent support to these demonstrations standing up for the end to corporate greed. The demands and values of the protesters are very much in line with Sierra Club’s strategic priority of confronting the power of the coal and oil industries.

Volunteer leads and staff around the country have requested that we make clear where the Sierra Club stands on these protests. This memo is designed to provide our initial thinking and guidance.

In a vibrant democracy, peaceful protest and demonstration is among the highest form of citizen engagement in the democratic process. Since the founding of our republic, ordinary citizens have accomplished extraordinary things by joining together to express their convictions. It is our heritage to speak truth to power, and our nation’s historic respect for peaceful dissent has helped the United States enact civil rights legislation, promote human rights internationally, and end unjust wars. Citizen engagement has brought this country out of its darkest hours and helped us fulfill our promises of justice and equality to millions.

The Sierra Club affirms its support for the exercise of political expression through the Occupy Wall Street protests. Corporations that pollute our air, land and water, that put greed ahead of community good, public health and the nation’s economic well-being must be held fully accountable. In our work around the country, we have seen first-hand how international coal and oil companies have wrecked communities, polluted our environment, and dominated the political process. We stand with Occupy Wall Street protesters in saying “enough.”

Finally, we want to make clear to all Sierra Club staff and volunteers, that you are authorized to participate in lawful and peaceful Occupy Wall Street protests in the name of the Sierra Club.

The corporate accountability message these protests are carrying fits very well with our strategic priority of confronting the power of coal and oil and contribute to our strategic priorities of building a movement and fostering key partnerships. We will shortly be providing further message guidance and support materials to help the Sierra Club add its voice to this powerful choir.

Citizens supporting wolves, wildlife, public lands, etc. ought similarly feel galvanized by the protests springing up all over the country – and we should participate.

The same general grievance – the disparity in political influence between the 1% and the 99% of the rest of us – no doubt holds true of Western public land and wildlife policy.  We’ve written time and time again about public land and wildlife in the West being held in common, as a public asset – it belongs to all of us – the many (99%ers).  Yet, a marginal few (1%ers) disproportionately control public policy directing its management (and exorbitant subsidies) to enrich themselves at the expense of the wild that all of us might otherwise better enjoy.  Think the recent legislative delisting of wolves, the many political insults to bighorn sheep (where a few individual ranchers have moved congress to act on their behalf to the detriment of wild-sheep and their many interested allies), Big Energy’s modern-day land-rush, horses, fish … you name the public environmental interest issue that hasn’t been trumped by the politically privileged few who hold control over public natural resource policy in the West.  It’s the few vs. the many:

Excerpt from Welfare Ranching: The Subsidized Destruction of the American West – Wuerthner & Matteson

The numbers are staggering.  The public land mass degraded by private/corporate livestock in the West is an area the size of three Californias.  The land used to directly run livestock in the West is just over a quarter of the total U.S. land-mass (excluding Alaska) and they do so at next to free while collecting between $500 million – $1 billion in direct and indirect tax-payer subsidies

The same holds true with so many natural resource industries.  The land and natural resource belongs to all of us, but access and management disproportionately favor commercial exploitation, profit, and uses that rob the many to benefit the few.

Find an ‘Occupy’ event near you (or start one !).  Think of a nifty catch-phrase that illuminates the plight of the natural world at the hands of the 1%ers. Get a piece of cardboard and a sharpie.  Find a group of friends all interested in wildlife and put together a performance !  Show up and have fun talking to like-minded people whose diverse grievances all derive from a common inequity and let’s push to make sure that wildlife and public lands are heard.