Extractive Industry Determines the Fate of Sage Grouse in Idaho.

On Monday, March 12, 2011, the Idaho Governor Butch Otter’s Sage Grouse Task Force had its first formal meeting. Originally the meeting was to be organized by the Idaho Governor’s Office of Species Conservation (OSC) but something happened and rather than have OSC organize the task force the Governor himself created the task force by executive order, presumably so that he could limit participation just to groups that would play by his rules.  And that is exactly what he did.  Below is a list of the members of the Task Force:

Craftily, as you can see below, the Task Force is tasked with minimizing the attention placed on the impacts of livestock grazing.  You will note that, within the list of impacts, livestock grazing is classified as “secondary threat” while “habitat fragmentation due to wildfire and invasive species” is listed as a primary threat.  Anyone who is honest about the threats to sage grouse realizes that livestock, and it’s associated infrastructure, is the primary reason for invasive species like cheatgrass and the associated increase in wildfire.  Livestock grazing is also the underlying cause for many of the secondary threats listed.  Water development, collisions with fences, prescribed fire and range treatments,  conifer “invasion”, and even West Nile virus are heavily influenced by livestock grazing and the associated infrastructure and activities. Yet, it seems, that most of the appointed members of the Task Force are predisposed to ignore all of that and focus on other issues. 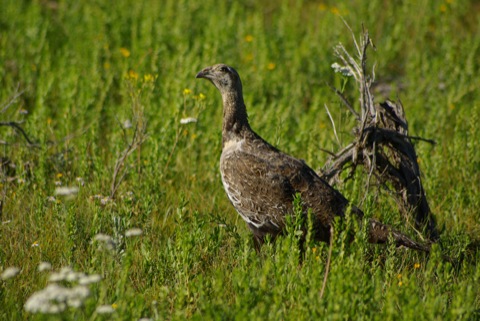 Sage Grouse watching for doom from above © Ken Cole

It will be interesting to see what kind of ridiculous recommendations come out of the Task Force.  I suspect that they will recommend more anthropogenic manipulation of the landscape in the form of juniper cutting and fuels projects and, I suspect, that wind and power interests will likely have to bow to the real lords of Idaho, the livestock industry.

This post explains more about the direction that this process seems to be going:
The Cowboy Plan to Save Sage Grouse….. Making Things Worse, December 14, 2011.

Let us call this what this is, it is an illegitimate process stacked with industry groups who only about sage grouse enough to want to protect their own interests and eliminate as much protection for sage grouse before the USFWS steps in and lists them as an endangered species.  They’re not fooling anyone and, it appears, there is no pretense of trying to fool anyone.

If you would like to attend the ensuing circus, meetings will be held at Idaho Department of Fish and Game offices around southern Idaho.

Duties of the Task Force:

A. Provide the Governor recommendations on policies and actions, using the 2009 Plan and other on-going activities as a backdrop, for developing a state-wide regulatory mechanism to preclude the need to list the species;

B. The recommendations must be based on the following objectives and/or criteria:

i. Conserve the species and its habitat while maintaining predictable and multiple uses of private, state and public lands;

ii. Identify and designate key/core sage-grouse habitat based on the biological needs of the species;

iii. Tailor the management recommendations to the import of the habitat and is attuned to the interests of the State;

iv. Address the following primary threats to the species as identified by the Service:

v. Address the following secondary threats to the species as identified by the Service:

vii. Recognize, encourage and incentivize land use practices that are actively maintaining or improving sage-grouse habitat as evidenced by improvements in habitat quality, active lek routes or stable/increasing populations of the species.