Back in 1924, when some parts of the public lands began to be set aside for protection as primitive places that would never be developed (not open to commercial logging, mining, or building) and where visitors would be required to rely on non-motorized outdoor skills to hunt, fish, camp, and travel about to see what original America was like, there nothing more important than that these places would not have roads or motor vehicles to provide easy (soft-living) access.

The “Primitive Areas,” of the national forests, later renamed and given congressional protection in 1964 as “Wilderness areas” were places for those who wanted to enjoy or confront nature on her terms.  Outdoor skill would weigh large. They were not be places for the soft or lazy man or woman — not for those who were afraid of a night outdoors without many thousand dollars of mechanized equipment.

Existing law –Wilderness Act — states: “Except as specifically provided for in this Act, and subject to existing private rights, there shall be no commercial enterprise and no permanent road within any wilderness area designated by this Act and, except as necessary to meet minimum requirements for the administration of the area for the purpose of this Act (including measures required in emergencies involving the health and safety of persons within the area), there shall be no temporary road, no use of motor vehicles, motorized equipment or motorboats, no landing of aircraft, no other form of mechanical transport, and no structure or installation within any such area.”

Since that beginning the National Wilderness Preservation System has grown to 110-million acres, all lands that have never had permanent roads because they were generally too rugged or where people did not want to see them built. Hunting and fishing in pristine conditions were key reasons for establishment of a Wilderness area, but so was the protection of the thousands of other creatures. Millions of people have struggled since to protect their favorite American backcountry from desecration. A study of American patriotism (nationalism) found that as many as a quarter of Americans perceived the beauty and unspoiled character of the land as a key element of loving America.

As far as national parks go, most of them were closed from the start to hunting because people wanted to see animals there were wild, yet not conditioned to flee humans. That is one reason wildlife was, and is so seemingly abundant in Yellowstone National Park and other large parks — not because there is so much of it, but because it does not hide from people.

Now the National Rifle Association (NRA)and others have pushed a shocking bill through the House that would give motorized access Wilderness and maybe national park backcountry to anyone who claimed they were going hunting or fishing. This would destroy our Wilderness system, and some say would be the final surrender to obesity of the already fattest country (31% obese) on the planet.

The bill is H.R. 4089, the Sportsmen’s Heritage Act, a Trojan horse name if there ever was one. Nevertheless, the name is a typical one during a time when a bill that would destroy jobs will probably be named “the Job Creation Act,” and a bill to defund our schools and universities will be called “the Education Improvement Act.” 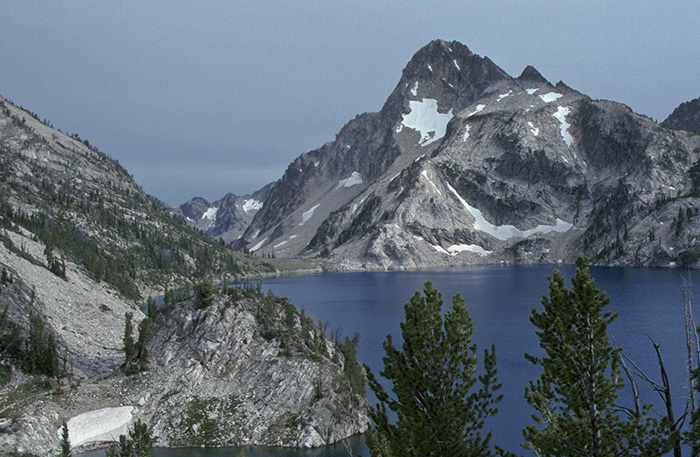 Ah Wilderness!! And soon I won't have to work to get there. Just like anyplace else, I can ride my ATV. Photo: Sawtooth Lake in the Sawtooth Wilderness, Idaho. Copyright Ralph Maughan

The NRA says it will be good for hunting and will protect the right to hunt, even though the federal right to hunt in Wilderness has never been questioned in Congress. The founders of the Wilderness movement were in fact mostly hunters. “Good for hunting” often means a bunch of measures to directly or indirectly kill non-game animals present if some narrow biologist decides the non-game animal or bird’ will  maybe result in a less than maximum number of game. Biological diversity is not an idea behind the Sportsman’s Heritage Act. It would Wilderness without any wildness — the human hand heavy.

None of the thousands of the traditional conservation groups are supporting this. Instead it is mostly groups who want to hunt their own particular fish or animal in an unlimited way or with a particular weapon. Here is the list we obtained.

Outside Magazine has an article on this ultimate threat to pristine America. Opening the Wilderness: Does a New Hunting Bill Put Parks in Danger? By Adventure Ethics.

The bill has passed the House and is being held at the desk in the U.S. Senate. This means it can be called up for debate at any time without even so much as a single public hearing.  Thousands of public hearings were held on bills to establish national parks, monuments, wilderness areas, but apparently their de facto abolishment does not require much public comment.

Would the President veto it? He hasn’t said, though it is an easy political calculation to understand that almost no member of the NRA will vote for him regardless. The biggest danger is that the NRA will pick off some Democrat in a hard reelection race to provide the vote needed to clear the Senate. Jon Tester of Montana is often mentioned, though we can bet almost every NRA person who supports the bill will vote for his opponent Denny Rehberg no matter what he does. Sherrod Brown in Ohio is another Democrat often mentioned.

The NRA is a Republican outfit.  People such as the author and his family who own many firearms are just not welcome there since we are independents or Democrats.  There is support for the second amendment, but not for all the Republican extras the NRA has developed.

This link gives the vote in the House on the bill http://clerk.house.gov/evs/2012/roll164.xml  39 Democrats voted for it compared to 235 Republicans who did.