Some call our public lands “American’s common treasure,” but the love of our land expressed in many forms, and the freedom they provide, have not stopped what are sometimes called “sagebrush rebellions” every decade or so. In the past, these “rebellions” have always been led by the livestock industry. The ranchers generally talk of local control and state’s rights and seek transfer of all but the national parks to the states, although in 1946-7 they actually tried to get the “grazing lands” transferred directly to themselves for free.

These efforts have always been beaten back once the public learned what was at stake, but now the really big lobby has stepped to the plate. The energy industry, especially oil, as represented by the Koch Brothers formed and funded ALEC, is expected to instantly flood western state legislatures with land transfer bills as soon as the state legislatures meet in 2013.

ALEC, American Legislative Exchange Council, has been wining and dining and taking state legislators on junkets, all the while discussing the lands. This right wing organization of state legislators is especially strong in Utah, where Romney is expected to draw many members of his Administration. Amid protests, this year ALEC even had their national convention in Utah.

If Romney is elected President, they will have a powerful friend in the White House. Romney has expressed disdain for public lands. If Obama is reelected, his wobbly commitment to our public lands is likely but a thin defense. While Secretary of Interior Ken Salazar will at last be gone, he could be replaced by someone much worse by Romney, or by someone not necessarily any better than Salazar, by Obama.

Earlier this year, Romney told a Nevada newspaper, I don’t know the purpose of all this federal land in the West. Then he made it clear he supports Republican land transfer bills. In the second presidential debate both men, most clearly Romney though, simply saw the public lands as a storehouse of present and potential energy development.

Obama faces the so-called “fiscal cliff” right after the election when regardless he will still be President. This will be in the “lame duck” session of Congress held before the new Congress and President take office. This “cliff” is a kind of “dead man’s trigger” that the two parties foolishly set up subsequent to the unnecessary and dangerous battle over raising the national debt ceiling back in April – May 2011. To disarm it, they will be looking for money to make the national debt appear smaller. Auctioning off our land might seem to be an attractive measure. 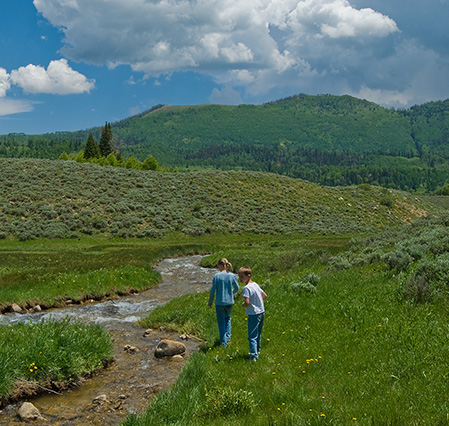 Children explore national forest land in central Utah not far from their home. Will this land be auctioned off to remote interests and wealthy around the globe? Copyright Ralph Maughan

Regardless of any federal lands sales, the Western states will quickly auction off any significant lands they receive because they have no money or capability to manage such a huge, sudden land glut even if they wanted to. For example, almost 2/3 of Idaho is national forest, national park, national wildlife refuge or the lesser known lands managed the the U.S. Bureau of Land Management (B.L.M.). All Western states have significant amounts of national public lands inside their borders. It is one of the very things that defines the West — “the public land states.”

Noted author about the public lands and the West, Tim Egan, recently wrote an essay for the New York Times “The Geography of Nope.” In it he describes the current situation and what might happen soon to our treasured public land and wide open spaces.

I taught the university level class “politics of public lands” for many years. It was clear the students loved the freedom to roam — to hike, climb, fish, photograph, rockhound, camp, study nature, hunt, boat, and motor around without asking permission or paying a huge fee to some absentee billionaire landowner. Unfortunately most had little knowledge of the difference between national parks and national forests, or of BLM lands, or national wildlife refuges. They didn’t know how this treasure came to be or how it was maintained. They didn’t know it isn’t this way in other countries or even in the Eastern States.

Neither did many know of the politics of grazing, timbering, mineral leasing, or appropriations for the public lands. These were Idaho students mostly too, the very ones supposedly most affected by and “in tune” to the public lands.

People without basic knowledge can fall for a slogan like “the states can do it better” because they are unaware how poorly the Western states manage their present mostly meager state land holdings (hint: it is managed mostly for cheap grazing for their stockgrowing allies except where there are minerals). They don’t know that keeping these lands public, though at the state level, would quickly bankrupt the states. Consider that controlling the Idaho wildfire this summer pumped $170-million of federal money into the state’s shaky economy. If Idaho had to do it, they would have just burned.

Tim Egan’s NYT article, referred to above, tells how one goes hunting in Italy. From it an easy conclusion is, if anyone wants to put an end to hunting, except for preserves for the very rich, there is no more certain way to do it than to privatize, sell off, our public lands.

Update: Romney and the public lands.

Romney To Nevadans: I Don’t Know ‘What The Purpose Is’ Of Public Lands (Hint: They Pump $1 Billion Into the State Economy).  Think Progress. Feb 3, 2012