Surprising many, a last minute bill that would grant cattle and sheep the right to vote passed in the Idaho Legislature in a late night session that began at midnight. SB9246, titled “The Livestock Equal Rights, Welfare, and Voting Rights Act”, is a sweeping bill that grants livestock the right to the vote in all local, county, state, and federal elections throughout the state and grants the livestock the right to transfer that vote to their owners as long as there is an affidavit signed by hoof in mud or feces. The bill also provides the ranchers of the livestock, now called “holistic livestock benefactor agents”, a direct tax rebate equal to that of child dependents, or $3,800 per animal per year. Additionally, the bill would trigger a redrawing of voting districts to reflect the new voters and would likely result in livestock majority districts in southern and south central Idaho. One right that was not granted to livestock was Habeas Corpus so the holistic livestock benefactor agents could still send the animals to slaughter for meat production.

Little notice was given to members of the legislature who might oppose the legislation, but one member of the public, who happened to be driving by, noticed a large group of senators and cowboys herding a group of sheep into the building. Luckily this person was returning home from a costume party and was wearing cowboy garb which allowed them entry into the statehouse where they were able to observe the proceedings.

With only a handful of the handful of Democratic members of the House and Senate present, the bill was quickly shuttled through committee in the Senate and then passed by those members present on the floor. The House Committee on State Affairs then quickly tried to pass the bill but one Committee member, tipped off by the disguised member of the public, showed up still in their pajamas. This member demanded that a full hearing be held on the bill in the committee and that testimony be taken from the public. When the Committee chair granted this request there were only supporters of the bill present so no opposing testimony was given. 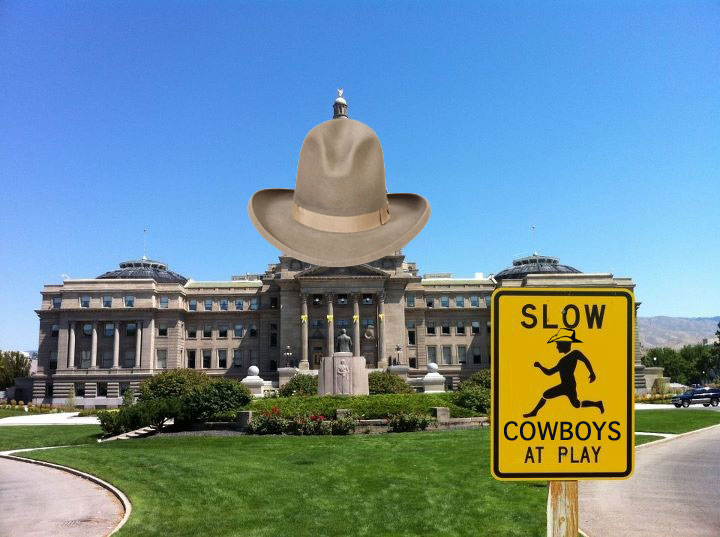 Supporters of the bill said that their livestock needed to have the vote so that their holistic livestock benefactor agents could ensure that their best interests were being represented in matters of importance. They rationalize this massive change would better insulate the livestock from being pushed off of public lands by burdensome environmental regulations.

Supporters also believed that the state would be granted two extra electoral college votes in presidential elections and two extra seats in the House of Representatives once the census is completed in 2020 although they asked for a resolution demanding that the changes be implemented immediately by the US Congress.

Another provision in the bill provides for a taxpayer funded, single-payer health care system for the livestock and their holistic livestock benefactor agents. Also included in the bill is funding for special schools that could be used only by the livestock and the children of the holistic livestock benefactor agents. These schools would be built at the site of individual ranches with ownership of more than 2500 livestock and would be outfitted with all of the latest educational equipment, schooling for other, smaller operations, especially for livestock in urban areas, would not be funded just out of principle.

Cattle and sheep will also be able to run for state, county, or municipal offices and could also be appointed to vacant seats by the Governor. As with votes, those seats could be transferred to the owners of the livestock.

Cattle, sheep, and their owners would also be immunized from trespass laws and laws against vandalism. This provision reinforces the open range laws already in existence throughout many western states which force private property owners to build and maintain fences to keep livestock off their property. A fine for vehicle collisions would also be levied against the driver or surviving passengers of any vehicle that hits livestock on any public road. The fine would be $11,400, or equal to three years of direct tax rebate given to the holistic livestock benefactor agents, and would have to be paid in full to the holistic livestock benefactor agents within a week of any such event.

To memorialize this bill the capitol dome would receive a special leather awning to make it more resemble a cowboy hat.

The conservation group, Idaho Friends, initially balked at the bill but later came out with a statement supporting a provision added to the bill which designated a 30 square foot area at the top of Mt. Borah as a state wilderness.

The lieutenant governor, who is sitting in for the governor while he is in Las Vegas to attend a rodeo, is expected to sign the bill into law later today.

The new law will probably result in litigation but, since cattle and sheep can be appointed to courts, the opposition will probably be unsuccessful in overturning the law.