There is a lot in the news about the potential listing of sage grouse under the Endangered Species Act. Western politicians are using heated rhetoric about how a listing would destroy their economies, and the “western way of life” (read death and destruction to native wildlife). And in good western tradition, they blame the federal government for its failures.

Here’s a representative response from Congressman Mark Amodei in Nevada. “In Nevada, wildland fire and invasive species, such as cheat grass, that follow in its path are responsible for nearly 85 percent of lost sage hen habitat,” said Rep. Mark Amodei. “Rather than putting the onus on local stakeholders through regulatory mechanisms to stop habitat loss, the federal government, as the landlord of approximately 85 percent of the state, needs to focus on preventative fuels management before wildfire strikes and habitat restoration following burn events. Multiple use is not the driver of habitat loss.”

Another recent study put out by The Nature Conservancy (TNC) in Wyoming listed the major threats to sage grouse as oil and gas and residential development in sage steppe habitat, and not a word about cows.

The response of Amodei and TNC is typical of the denial that one hears throughout the West when discussing the causes contributing to sage grouse declines and sagebrush ecosystem losses. We in the West live behind what I call a Bovine Curtain. Like the so-called Iron Curtain that used to filter information critical of Communism in the old Soviet Block countries, the Bovine Curtain limits what we hear about the detrimental effects of livestock. 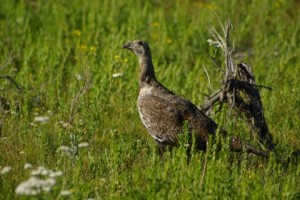 Sage Grouse watching for predators from above © Ken Cole

It is true that wildfires are chewing through millions of acres of sagebrush and in many cases creating a type conversion to cheatgrass. But Amodei has it wrong. It is not that cheatgrass follows fires; rather cheatgrass follows livestock which contributes to the flammability of grasslands and results in more frequent wildfires. Wildfires are natural to native grasslands—though not at the frequency created by cheatgrass– and healthy grassland easily recovers after fires. It is only grasslands that have been degraded by livestock grazing that are vulnerable to significant cheatgrass invasion.

If Representative Amodei were true to his words, he would understand that the best “preventative” fuels management would be to eliminate the major cause of cheatgrass spread and establishment in the first place. And that source is livestock production.

Similarly oil and gas development and residential home construction does impact sage grouse habitat, but the area covered by these activities is minor in proportion to the landscape affected by livestock production, whether in Wyoming or anyplace else in the grouse’s range—a fact conveniently ignored or simply unknown by the Wyoming TNC because of the Bovine Curtain that limits public awareness of the connection between cows and sage grouse decline.

It is analogous to noting that people are dying from lung cancer (proximate cause of death), but neglecting to make the connection between smoking cigarettes (ultimate cause) and these deaths.

There are many proximate causes of sage grouse decline. Wildfires. Sagebrush habitat conversion to other uses. Predators. However, if you map out all of these and other factors to the ultimate factor leading to sage grouse decline, you can trace it to livestock production. But you won’t see anyone make the connection. Not the politicians; not the BLM; not even the Fish and Wildlife Service that is responsible for determining the fate of the sage grouse.

First, let’s look at the connection between cows, fire and cheatgrass. Cheatgrass is an annual grass that is highly flammable. If there is sufficient moisture millions of seeds will germinate to create a very thick continuous blanket of highly flammable fuel. In addition, cheatgrass dries out sooner than other grasses, thus contributes to higher fire risk earlier in the season—creating a potentially longer fire season.

By contrast the native grasses that cover much of the sagebrush steppe ecosystem are perennial bunchgrasses. They are called bunchgrasses because they naturally grow in clusters with wide spacing between plants.

In-between the widely spaced bunchgrasses grow bio crusts or various mosses, lichens and cyanobacteria that cover the soil. This coverage of soil by soil crusts creates a largely dense cap that is difficult for the small seeds of annual grasses like cheatgrass to breach, though the larger seeds of native bunchgrasses can occasionally penetrate. Thus intact bio crusts help to preclude cheatgrass invasion by limiting seedling establishment.

However, biological crusts are very vulnerable to trampling and damage from hooves. In most of the sagebrush steppe ecosystem, particularly in the Great Basin which includes Nevada, eastern Oregon, southern Idaho, and much of Utah there were almost no large herds of grazing ungulates (like bison). And even other parts of the sagebrush steppe that includes southwest Montana, parts of western Wyoming and Colorado, were on the fringe of the bison belt which was located to the east on the Great Plains.  So these ecosystems are not very tolerant of livestock grazing. When livestock are let loose on these lands, they destroy the bio crusts which provide the perfect disturbed soil conditions favorable for cheatgrass establishment. 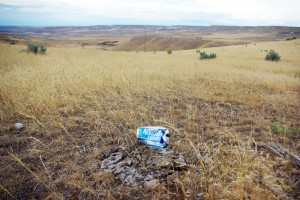 In addition, cows help to transport the seeds of cheatgrass, and by grazing the dominant native bunchgrasses, they also weaken their competitive ability leading to their decline and creating more unoccupied open space for cheatgrass invasion.

This is all well documented in the scientific literature, so why isn’t the FWS, BLM and so on noting this connection? Because they are not allowed to say the word “cow” when one lives behind the Bovine Curtain.

Cows affect sage grouse in many other ways as well. For instance, sage grouse are poor fliers and frequently fly into fences. In addition, fence posts provide perches for avian predators like hawks that prey upon the slow flying grouse. Livestock fences are ubiquitous throughout the West.

Sage grouse nests are vulnerable to predators due to the loss of grasses and forbs. So nest predation is another consequence of livestock grazing reduction in vegetative hiding cover.

Livestock production also affects sage grouse through predator control by changing the abundance of sage grouse predators through mesopredator release. Coyotes can and do prey upon sage grouse. It is well documented that wolves will kill coyotes if given a chance, therefore the presence of wolves can reduce and/or exclude coyotes from areas dominated by wolf activity. Yet one of the major obstacles to the widespread recovery of wolves in the West comes from the livestock industry, thus ensuring a greater coyote population.

If the sage grouse manage to avoid predators and hatch their eggs, the young chicks, despite their name, rely on insects and forbs during the first few weeks of their lives. They forage in wet meadows and riparian areas where insects are in higher concentrations. Cattle grazing is one of the major factors in the loss of wet meadows and riparian areas due to trampling, soil compaction, and loss of vegetation in these critical areas.

Another major effect of livestock production is the creation of hay fields. Nearly all livestock operations in the arid West rely upon supplemental feed provided by irrigated hay meadows. Almost all hay fields are carved out of native vegetation, both existing wet meadows and riparian areas or sagebrush covered uplands. For instance, a GAP analysis finds that 5.5 millions of Montana (an area nearly equal to the state of Vermont)  is irrigated, mostly hay/alfalfa.  Though not all of this hay land is former sage grouse habitat, across the West, there is no doubt that considerable acreage of the riparian/wet meadow lands formerly used by sage grouse chicks have been converted to livestock production.  It is yet another often ignored impact of cattle ranching upon sage grouse.

An additional way that livestock production contributes to sage grouse decline is the occurrence of livestock water troughs in many parts of the sage grouse’s range. The troughs are perfect habitat and breeding grounds for mosquitoes that carry West Nile Virus that in some parts of the West has severely impacted sage grouse.

Finally,  cattle avoid sagebrush when foraging and prefer grasses. In response, federal land management agencies like the BLM have sprayed, chained, burned, and otherwise destroyed millions of acres of sagebrush to create more grasslands for cattle.

To suggest as these politicians, land management agencies, and conservation groups like TNC that livestock are a neutral or even as sometimes asserted, a positive force in sage grouse recovery must be viewed with disbelief. It demonstrates how effectively the Bovine Curtain works to deny the public the information it needs to make informed decisions and the overall bias of these agencies towards the handful of welfare ranchers who are destroying public lands for their private profit.

62 Responses to Sage Grouse, Livestock Grazing, and the Bovine Curtain