Do you have some interesting wildlife news? August 16, 2013 edition Wind Drives All Large Blazes

Talking with  Hailey resident Jon Marvel early last week about the huge Elk Creek and Pony wildfires blazing northeast of Boise, Idaho, he said “Watch the Beaver Creek Fire, especially as the weekend arrives.” The weekend came with the predicted winds and a stampeding wildlife of 93,000 acres!

Weather forecast for 8/20 and later- Forecast high is 86 degrees, the same as yesterday. No storms are predicted. Winds are predicted to be slightly calmer at 5-10 mph. The low on Tuesday night-Wednesday morning is predicted to be 39 degrees. It is getting cold, good news for fighting the fire. However, thunderstorms (40%) of precipitation are predicted on Wednesday.

Update at the end of 8/19/13. The fire is now approximately 105-thousand acres in perimeter size and 10 percent contained. The fire burned hard in the top of Deer Creek on 8/19, but that is in the backcountry. 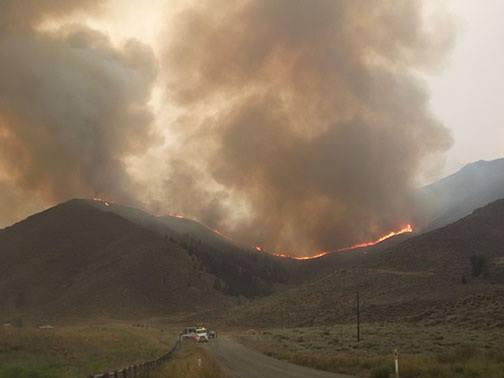