Are Domestic Sheep responsible for the Bighorn Sheep Die-off in the Mojave? Celebration and warnings as Greater Yellowstone Coalition marks its 30th year

This year there had been two grizzly bear-human injuries in the Island Park area, neither especially serious until Aug. 23. Then someone shot a sub-adult female grizzly bear. It is still under investigation. Now a second grizzly bear has been shot. She became the 20th killed grizzly in the Greater Yellowstone this year. Two days later a male grizzly that had killed too much livestock for the authorities’ taste was “removed” from Crow Creek in the Bridger-Teton National Forest (dead bear no. 21).

Island Park is exactly the kind of place one would expect to find grizzlies and black bears this time of year in a year of whitebark pine nut crop failure (the new norm). 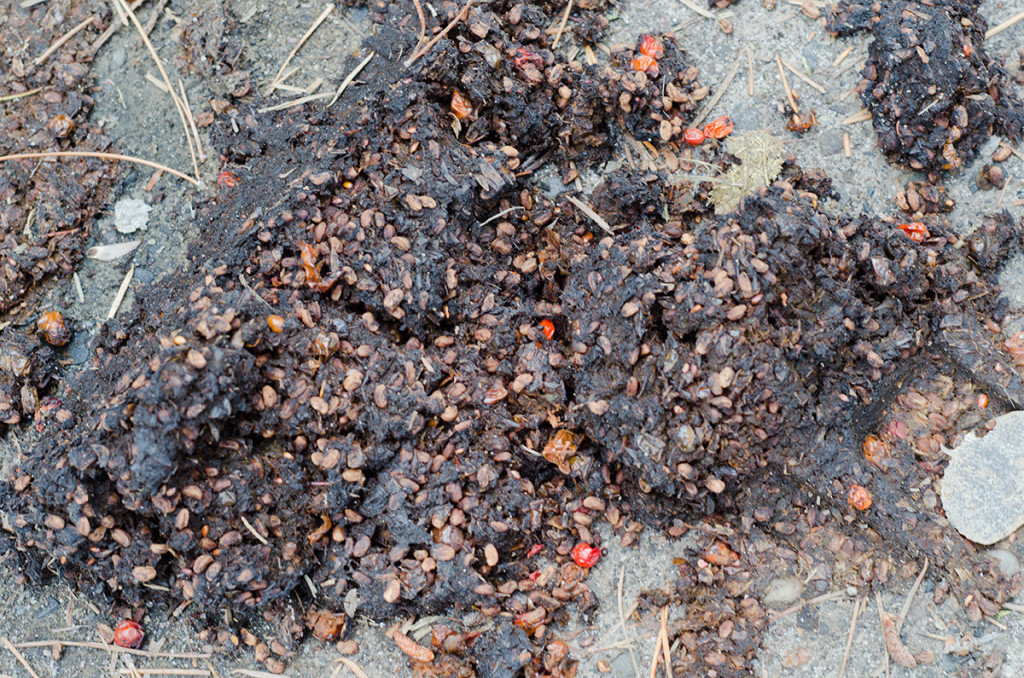 The details of this second grizzly bear shooting have not been released (see the news release below). People are concerned about her two cubs. They have been determined to be yearlings by their paw print size. Cubs of-the-year almost never survive the winter when orphaned. Yearlings, such as these, have a better chance. There is also some indication that these two yearlings are in good condition, a big plus for surviving hibernation.

Idaho Fish and Game explains below that they will not capture the cubs and to try rehabilitate them, and why they think that rehab would not work.

I was in Island Park and adjacent national forest and private land last weekend looking for bear sign. I found a lot near the forest edges down low, but little back further in the national forest (such as the Lionhead area and Madison Plateau).  See the photo of some of the scat above. You can see what the bear was eating.

ISLAND PARK – On September  12, 2013 an adult female grizzly bear was shot by a resident of Island Park, Idaho. Because the incident is under investigation by the enforcement branch of the United States Fish & Wildlife (USFWS), these are the only details able to be released at this time.  Because the grizzly bear is still listed as a Threatened Species under the Endangered Act decisions made regarding the handling of grizzly bears falls under the jurisdiction of the USWFS. As the result of the shooting two young grizzly bears were orphaned.

There has been some concern from the public because it has been believed that the bears orphaned were cubs-of-the-year, born this last winter.  When measurement taken of the young bears’ front paw pad prints at the scene where the sow was shot were compared to hundreds of previous measurements from other cubs of the year, it is clear these bears are yearlings.   According to Large Carnivore Biologist Bryan Aber, who works for Idaho Department of Fish & Game (IDFG) and is part of the Interagency Grizzly Bear Study Team (IGBST), “7 centimeters (cm) is the standard for cubs of the year in the Yellowstone Ecosystem, measurements I made of the cub’s front pad prints were 8.5 cm and 9 cm.  This measurement clearly makes these bears yearlings.”

There has been a call by some members of the public to capture the grizzlies and place them in a rehab facility, as if they could be held in captivity, fed, and released later somewhere.   According to USWFS Grizzly Bear Recovery Coordinator Chris Servheen, “Rehab with grizzlies is really not an option.   Grizzly bears cannot be captured and held in a facility and released later.  If these bears were captured they would have to put in permanent captivity in a zoo or euthanized.”  According to Aber, “The bears appear to be in good shape and by reports they are at least 100 pounds.   They have been observed feeding in the forest on elk gut piles, so as long as they stay away from humans they should be able to go into hibernation later successfully.” Chris Servheen said, “If these bears get into conflicts they may be captured and relocated to another area, but this will only be done as a last resort.  Their best opportunity to survive is to be left within the habitats where they grew up and for residents to make sure all attractants like birdfeeders, pet food, livestock feed, and garbage are secured and unavailable bears.”

Residents and hunters of Island Park know that both black and grizzly bears are present throughout the area.  The killing of a grizzly is rarely the end of the story; often there are management and legal outcomes that require difficult decisions. Working to prevent human caused grizzly bear deaths is the best way to keep things simple.  To learn more about grizzly bear recovery, management, and safety visit: www.igbconline.org.

Here, belatedly, is the news release on the first grizzly bear to be killed in Island Park this year.  It was in my email from Idaho Fish and Game dated. Aug 24. The bear seems to have been shot because it visited an site where earlier this year a bear (the same bear?) had torn down a bird feeder.  We have to wonder if this one is maybe a prosecutable offense. It seems a classic example why the grizzly bear must not be delisted.

By Idaho Fish and Game

ISLAND PARK – Early in the evening of August 23, 2013, a young female grizzly bear was shot and then killed by the caretaker of a private residence in the Shotgun Valley area of Island Park, Idaho.  No human injuries were reported.  A grizzly bear had visited the site previously and torn down a bird feeder to eat the seeds.  Because of the earlier bear activity the caretaker was carrying a high-powered rifle while performing his chores.

The incident occurred only a few miles from the site of a grizzly bear attack that took place on August 15, where a bear startled by two habitat technicians charged.  One individual received a bite to his thigh and backside, while the other had minor injuries to his hands.  Biologists from the Idaho Department of Fish & Game took tissue samples from the shot bear to compare with samples taken from clothing worn at the earlier incident.  Unlike television detective shows, DNA results may take a while to return from the laboratory. The bear killed is not known to have had previous contact with humans.

The incident is being investigated by a special agent from the United States Fish & Wildlife Service (USFWS), with assistance from Idaho Fish & Game conservation officers.  The USFWS is the agency in charge of all management actions while the grizzly bear remains listed as a threatened species within the Yellowstone Ecosystem.  Once delisted, the separate states would assume management, with oversight by the USFWS for an initial five year period.