Do you have some interesting wildlife news? Oct. 29, 2013 edition Wildlife Services internal memo on state compensation and wolf depredation

Sage Grouse Can’t Fly…. According to the Las Vegas Review-Journal.

This morning I came across an editorial in the Las Vegas Review-Journal that was obviously written by someone who knows next to nothing about sage grouse.  As most of you know, editorials are articles written by the news editors of their respective papers that express the opinion of the newspaper.  They are often unsigned.  The editorial is about the recently released federal land use management plans that are meant to protect sage sage grouse and keep them from being listed under the Endangered Species Act.  What’s funny is they start by stating, unequivocally that “the bird can’t fly”.  They can. I’ve seen them….. many times, because I spend time in the places where they live.

This editorial accuses environmentalists of not really caring about sage grouse but that they are just using them as a pawn to restrict land uses.  They also claim that environmentalists don’t live in the states where sage grouse are potentially going to be under the Endangered Species Act.   To prove their point they cite a quote from Mark Salvo, who admittedly lives in Washington DC now that he has started working for Defenders of Wildlife, but he has worked on this particular issue for a very long time.  Mark says that the federal plans issued last week don’t go far enough to protect sage grouse.  He’s right, they don’t.

They go on to say that “ranchers and their livestock have been driven off the region’s land, the populations of previously hunted predators have increased and vegetation has overgrown to fuel wildfires“.

Well, exactly the opposite is true, especially in recent years.  First, hardly any ranchers have had their allotments closed, let alone reduced to levels below actual use — in other words, most allotments have a level of permitted use that is much higher than what ranchers actually use and, when cuts are made, they are only made to so-called “paper cows” or livestock grazing that only exists on paper.  Second, predators become more effective at reducing prey populations if habitat conditions are degraded as with overgrazing which reduces hiding cover especially for nesting and brood rearing.  The populations of predators haven’t really increased due to lack of hunting, the same number of predators have just found it easier to find their prey because livestock grazing has essentially beaten the vegetation to a pulp.  Third, vegetation hasn’t “overgrown” it has changed composition, especially in lower elevation areas where cheatgrass has proliferated because livestock grazing has eliminated or greatly impacted native grasses and microbiotic crusts.

Why would the Las Vegas Review-Journal print such a ridiculous and blatantly false editorial?  Well, as pointed out in one of the comments on the editorial, maybe it has something to do with the fact that the paper is part of a big conglomerate of companies owned by the Stephens Group which “owns a whole bunch of mining, oil, and gas development/supply companies.”

Maybe before writing an editorial the Las Vegas Review-Journal should do a little research before it starts spouting off about things it knows nothing about.  Better yet, maybe readers should quit reading articles in a hack paper with such an obvious conflict of interest.  Oh, and Las Vegas Review-Journal, look at the caption for the picture below.  You might just learn something. 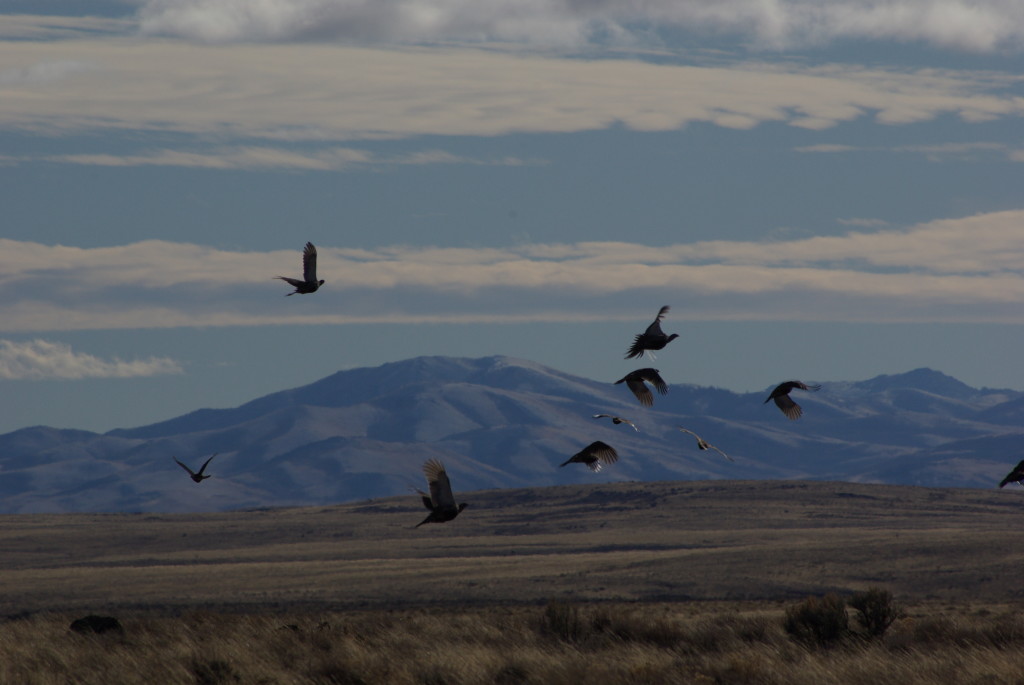 21 Responses to Sage Grouse Can’t Fly…. According to the Las Vegas Review-Journal.