The proponents’ expressed intent is for the Wolf Control Board to reduce the Idaho wolf population to 150 wolves.
See update at bottom

A public hearing is scheduled for Monday at the Idaho State Capitol in Boise on Governor Otter’s “Wolf Control Board” bill HB470 which establishes a board which would composed solely of people appointed by the Governor.

The Committee will be taking public testimony on the bill and people who plan to attend should arrive early to be sure that their testimony will be heard.  Those who cannot attend can listen to audio from the House Resources and Conservation Committee.

As one of only three major issues Governor Otter proposed in his State of the State Address, the “Wolf Control Board” is clearly one of his highest priorities.

One form of growth we don’t want to encourage is in the wolf population that was imposed on us almost twenty years ago. With your unflinching support we were able to fight through the opposition of those who would make Idaho a restricted use wildlife refuge and take back control of these predators from our federal landlords. Now we’re managing them now, and they’re a trophy hunting species (sic), and the population is still growing, and our resources remain at risk.  So I’m calling for the establishment of a wolf control fund and a state board to direct and manage it. My budget recommendation that calls for a one-time allocation of two-million dollars to get the fund started. That base could be… would be augmented with continuing annual contributions of at least a hundred-and-ten-thousand dollars from the livestock industry and a matching amount from the Idaho sportsmen. This three-pronged approach will provide the revenues needed to effectively control Idaho’s burgeoning wolf population and ease the impact on our livestock and our wildlife. – Governor Clement Leroy “Butch” Otter at his January 6, 2014 State of the State Address 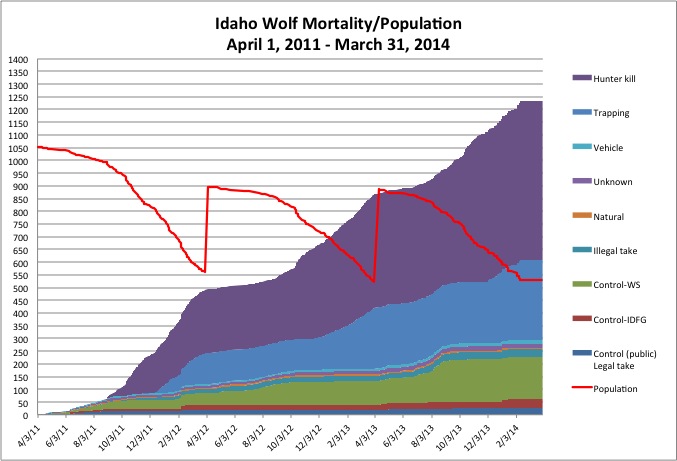 The board would be started with $2 million from the General Fund and in subsequent years would be funded with $110,000 from the livestock industry and $110,000 from Idaho Department of Fish and Game license funds.

So they held the hearing in the Idaho House Resources and Conservation Committee. The committee then voted 14-4 on Monday, Feb. 17 to report  the bill out of committee. It now goes to the floor of the House. Of the 3 votes against it, three were Democrats and 1 was a Republican.

Media report that about 50 people testified. Their testimony was split about equally between pro and con. Here is a report from the Magic Valley Times News.  $2M Wolf Management Bill Moves to House Floor. By Kimberlee Kruesi.
Here is another story on the hearing. Full house for $2 million wolf control bill hearing… Posted by Betsy

66 Responses to Public Hearing on Governor Otter’s “Wolf Control Board” on Monday. Updated