Last year I learned that anti-predator activists were organizing a predator killing derby to take place in Salmon, Idaho – a place smack dab amidst one of the largest and most breathtakingly diverse public landscapes in the country. A few of us infiltrated the event with the aim of exposing the extent of the depravity to the public (See: VICE: How to Kill a Wolf), and hopefully aiding any litigation and legislative efforts that may follow in the future with factual support.

This year the event garnered a great deal more attention from the environmental community. Lawsuits were filed but, unfortunately, the existing state of the law has yet to secure protections that would effectively curtail this very public wanton infliction of suffering, destruction of life, and appalling disregard for the potential impacts to ecological communities inhabiting this profound public landscape.

A brilliant and courageous group of activists (including: Stephany Seay of Buffalo Field Campaign, a person whose adept insights and experience working with BFC largely provided the model and know-how for this year’s effort; Ritchie Eppink of the ACLU of Idaho, a person and organization that has ably protected Idaho citizens’ rights to practice journalism, expression, and the full suite of constitutionally protected methods of civic engagement; Lynne Stone of the Boulder White Clouds Council, who first blew the horn on last year’s derby, organized information, and whose years on the ground advocating for wolves on the landscape at issue provided invaluable support; among others) came together and committed to bear witness the events that would transpire during the derby again, this time with a very particular aim: We would counter their heavily armed violence and hate openly – with cameras, with light. 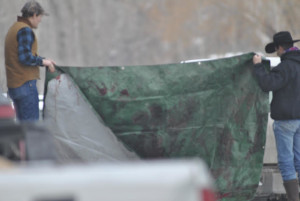 On the third day of the wolf-killing contest, an earthquake shook the mountains near Salmon, Idaho. “It’s Mother Earth revolting against the cruelty, the violence, the madness, of what’s happening here,” said Brian Ertz, president of the nonprofit advocacy group Wildlands Defense.

Read about the rest in VICE.  Environmentalists Couldn’t Stop the Slaughter at Idaho’s Annual Coyote and Wolf Derby – VICE Magazine – by Christopher Ketcham