At Katmai National Park, Bears and Humans Too Close for Comfort

One of the most awe-inspiring wildlife spectacles in the world is the scene of brown bears catching salmon at Katmai National Park. During the summer sockeye salmon runs, brown bears congregate on the Brooks River to capture salmon jumping the Brooks River waterfall, and later to feed on carcasses of dead salmon washed downstream after spawning. The annual salmon feast sustains the dense bear population found in Katmai which is home to an estimated 2,200 bears – the largest protected bear population in the world.

I spent a month exploring Katmai in the late 1970s. Back then I sometimes was the only person watching bears at the falls. Since then, the popularity of this amazing wildlife spectacle has grown exponentially. During the height of the summer tourist season, hundreds of visitors may crowd the river daily hoping to see the bears and salmon. Between the coming and goings of tourists, the float plane landings and barge landings, the Brooks River bears are suffering from the growing human encroachment.

Dr. Barrie Gilbert, emeritus senior scientist at Utah State, and his graduate students have studied the human-bear interactions at Katmai National Park for decades. Their studies document that bears, particularly the most vulnerable bears – those with cubs – alter their behavior to avoid areas with heavy human presence.

The area surrounding Brooks Camp was once a primitive fishing lodge. Over the years the tourist infrastructure has incrementally expanded to include a campground, living quarters for park staff, a visitor center, and landing facilities for float planes – all within prime bear habitat. According to bear biologist Gilbert, there is no other comparable development in prime bear habitat anyplace in the world.

“Human access and close contact with Brooks bears is the most permissively managed of any agency or private viewing site in the world,” Gilbert says. “Over 32 years I have witnessed visitor numbers go from dozens of people per day to over 200 on some days now. Visitor activity anywhere along the river can begin at dawn and extend to almost midnight.”

As a consequence, bears attempting to get to the river to feed must run a gauntlet of humans. Bears are sometimes hazed by armed rangers using air horns, firecrackers, and rubber bullets to move bruins away from the lake and river to permit visitor movement. Such hazing may prevent dangerous interactions between humans and bears, but it’s debatable whether harassment of wildlife is appropriate in a national park where wildlife is supposed to be protected.

To try to reduce bear-human interactions, Katmai National Park personnel and National Park Service staff spent 10 years to produce, vet and finalize its Brooks River Area Development Concept Plan. The plan – which was finalized 1996 – proposed moving all developments from the river area to a low bluff on the south side of the river, freeing up the north side of the river as a “people-free” zone for the exclusive domain of the bears. Use of the river area would become a restricted day use area. This was smart strategy, grounded in the best wildlife science.

But political interference – prompted in part by some tour operations and others who were opposed to any restrictions on access for tourist – resulted in lack of funding for implementation of the plan. The plan has sat in limbo for close to 20 years. As a result, the NPS has tried some bureaucratic short-term fixes, including an amendment to its plan which proposes constructing of a permanent 1,550-foot-long, elevated vehicle/pedestrian bridge over the lower Brooks River to connect facilities on either side of the river.

However, some Katmai lovers (including me) and former park officials believe the construction of a permanent (and expensive) $7.4 million bridge will likely ensure that no commercial facilities will be moved as originally planned, and will only lead to increased human use of the entire Brooks River area to the detriment of the park’s bears.

Echoing Bane’s concerns, bear biologist Gilbert has withdrawn his original support for the plan. Two other bear biologists have also withdrawn their endorsement of the now amended plan.

Gilbert compares Alaska State Park’s McNeil River bear viewing policies with those in Katmai. Gilbert points out that visitation at McNeil River has been strictly limited to 10 people per day, in the mid-day period, all confined to a single gravel pad above the falls. Thus, he notes, human activity is limited in time and highly predictable in space so bears can adapt or habituate. This also permits bears a much broader range of locations to obtain fish undisturbed by mobile humans.

Former Katmai Superintendent Bane believes the park service should put a cap on visitation and start a new round planning efforts focused on removing the human infrastructure from the Brooks River area. Bane recently wrote to Secretary of Interior Sally Jewell asking her to intervene. In his letter, Bane notes: “There was – and continues to be – resistance to setting limits on visitor numbers to prevent disrupting the natural dynamics of Brooks River and exceeding the management capabilities of the park staff. The Park Service found itself putting bureaucratic band aids on a situation that is ultimately destined to fail, possibly catastrophically.”

Bane goes on to say: “We are effectively allowing what is arguably one of the truly wonderful natural wildlife spectacles in the National Park System to be overwhelmed and degraded by the building of intrusive structures, increasing congestion and excessive commercialization of the Brooks River area. I am sincerely concerned that we have already pushed the envelope to the breaking point at Brooks River.”

National Parks are mandated to protect the resources within their borders. We can expect humans to adapt to the bears, not the other way around. Reducing conflicts and exposure to human intrusions should be the guiding philosophy for park management. The bears do not have a voice, but you do. Please write Secretary of Interior Jewell and ask her to give Katmai bears some space. 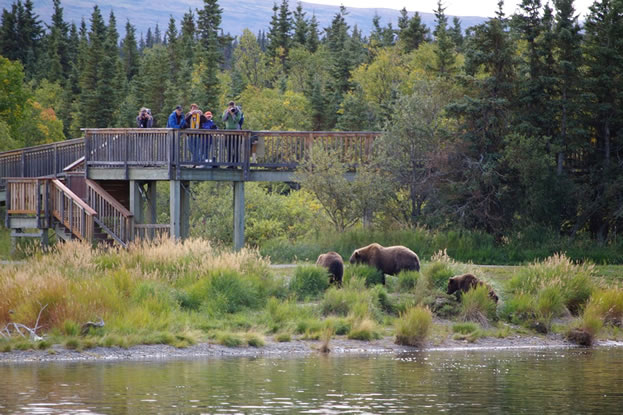 George Wuerthner is an ecologist and former park ranger who has visited hundreds of national park units including every park unit in Alaska. He has published of 38 books. His most recent is Protecting the Wild: Parks and Wilderness the Foundation for Conservation.

This article is reposted with permission from the Earth Island Journal. July 7, 2015

What You Can Do:

Write Secretary of Interior Sally Jewell immediately and ask her to stop construction of a permanent bridge over the Brooks River, and ask that the NPS begin a new Development Concept Plan that puts the bears’ safety and needs first.

If you have time, send copies of your letter to the following folks.

8 Responses to At Katmai National Park, Bears and Humans Too Close for Comfort