Sacrificing the Grizzlies of Katmai Park

The Plan to Turn Brooks Camp Into a Theme Park-
By Dr. Barrie Gilbert

One of Alaska’s most treasured bear-viewing sites is about to be turned into a destination theme park, sacrificing grizzly bear habitat on the altar of commercial development. After a decade of development planning, EIS and public input, once aimed at major improvements in resource protection, the National Park Service has aborted earlier plans for removal of facilities at Brooks River in Katmai National Park. Protection of a unique population of bears at this premier site is now seriously compromised, going against 50 years of research-based recommendations. A stealth plan to expand development into bear habitat on both sides of Brooks River has quietly been hatched turning prime bear habitat into a sacrifice area. The Service is abandoning the long-planned removal of visitor and park facilities from one side of the river, the heart of essential bear habitat. Only moneyed interests will be happy. 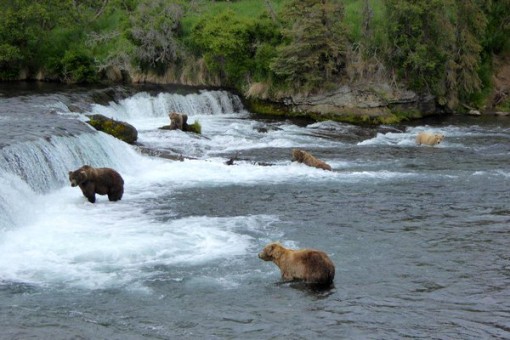 The Brooks River near the camp.

Across the USA we are about to witness another instance of commercial development over-running the Park Service’s responsibility to protect park wildlife resources. Those who remember a similar planning process to eliminate the Fishing Bridge development in Yellowstone National Park for relocation out of essential grizzly habitat will recognize this current sham advancing for similar reasons at Brooks River.

Brooks bears are a large, ecologically unique population that concentrates in a small area around Brooks Camp in the heart of Katmai National Park due to unusual physical and ecological conditions.  Nowhere does such a dense aggregation of bears extend their fishing over a 4-month long season as a result of a super-abundance of salmon available first at a 5 foot falls then moving into spawning streams over a wide area culminating in massive carcass accumulations accessible into the fall.  Over time these protected bears have developed complex traditions to efficiently exploit this rich resource, a fascinating pattern unreported anywhere else on the planet.  This unparalleled ecological and behavioral complex stands to be degraded before the phenomenon is fully understood. If the massive permanent bridge, encroaching on both sides of the river and already designed and funded, is constructed, excessive human presence, accompanied by elevated noise and disturbance, and predictable over-use, will severely damage the area.

This ecological gem has further value because of the surprising but successful 50-year recovery, moving toward historically natural, high numbers and density of brown bears.   This high density permits the full ecological role of the bears in the system to be fully realized: processes such a nutrient transport into the higher elevation forests, seed transport in fecal deposits are now at work, but bridge impacts are likely to threaten ecological and behavioral functions that have yet to be discovered.

Studies beginning in 1955 followed by others in the early 90s showed clear impacts of escalating visitation at Brooks Camp and the attendant din of aircraft engines, boat motors and motorized vehicles used to service visitors.  Approximately half of the female bears with cubs were prevented from using large parts of their feeding habitat due to human activities.  Currently the number of visitors, aircraft landings and noise grows unabated. A high permanent bridge and a new 1500 foot elevated walkway threaten the last relatively people-free bear habitat.

There is rich irony in the Park Service’s failure to impose any limits on visitation compared to McNeil River’s visitor management (10 person limit) by Alaska Fish and Game, oft ridiculed as the hook and bullet bureaucracy, and not recognized for their conservation agenda in the McNeil case. Over 10,000 visitors arrive by seaplane or boat between May and October, with daily use exceeding 300 visitors during peak times. The fingerprints of the late Sen. Ted Stephens are all over Katmai management as a destination tourism cash cow. On the other hand, the state defends bear hunting interests by strangling bear-viewing state-wide. Nice trick.

If current plans for these permanent structures proceed the impacts of people on bear use will envelop virtually all of their essential habitat on both sides of the lower river.  This includes bears using the beach, Brooks Camp area, riffles, falls and the whole lower river.  Instead of providing people-free zones for bears, the amended plans have mysteriously mutated into development over-kill instead of the camp removal that was approved and which the public was promised.  As currently conceived the construction will not remove the concessionaire lodge and facility and will expand the footprint of development over archeological resources and valuable bear habitat, development which encourages further human impacts over larger areas with accompanying harassment and disturbance of bears.

Decisions as to the future of Brooks River must be, in large part, founded on scientific research. It is significant that three eminent bear biologists who had endorsed the Final Brooks River Development Concept Plan have recently withdrawn their support for the amended plan. Their rejection of the current plan reflects a growing concern that the welfare of the affected bear population will be adversely impacted by the on-going expansion of facilities and human activities at Brooks River.

The primary attraction at Brooks River is not the scenery or inanimate geological features. It is the bears, one of the most intelligent and complex species of wildlife found in North America. These animals are more than mere animate objects providing public entertainment. In their natural setting they have much to teach us about the complexities of nature and our own place in the natural world. We have much to learn from them, but that will require that we respect their fundamental needs and not overly impose our presence on their habitat.

As a university scientist I studied bear behavior and bear-human interactions for the Park Service under contracts beginning in 1984. Those studies of potential conflicts showed that Brooks Camp, including a concessionaire’s lodge, cabins and park service buildings were situated on trails used daily by bears during the summer salmon runs. Our results and the parks’ own records supported earlier studies by Will Troyer in the 50s. Troyer recommended that Brooks Camp be moved away from the heart of bear habitat. All studies showed that 500-1000 lb. bears were walking in close proximity to hundreds of people both day and night.

Since the current amended plan allows dozens of float planes to land each day and deliver passengers on the same north beach as well as permitting the lodge and cabins to remain in bear habitat, the major source of conflicts remains. This means that a planned $5 million bridge and elevated walkway will no longer reduce these interactions with bears except in some minor locations.

The Park Service’s reversal in plans without adequate public review or even sufficient announcement is a threat to America’s willingness to trust this institution and calls into question the Service’s ability to resist political pressure that puts profits for a concession above the protection of the nation’s most cherished biological and cultural resources. We all need to insist that the NPS uphold its mission as mandated in the Organic Act of 1916, which is “to conserve the scenery and the natural and historic objects and the wild life therein and to provide for the enjoyment of the same in such manner and by such means as will leave them unimpaired for the enjoyment of future generations.”  The appended plan needs to go back to the drawing board.

30 Responses to Sacrificing the Grizzlies of Katmai Park