How about a new agency to administer our Wilderness? Grazing Fees Still a Sweetheart Deal for Private Industry, Agencies Abashed at Having to Raise It

During last month’s armed takeover of the Malheur National Wildlife Refuge, several articles reported that the Bureau of Land Management’s (BLM) – the agency you lead– was in negotiations to restore a grazing permit of the convicted criminals whose mandatory minimum sentencing was ostensibly the spark that ignited the January standoff.  The Bundy bunch and their allies felt that Dwight and Stephen Hammond were unfairly treated by the court’s enforcement of the required prison sentence for setting fire to public lands to cover up their criminal wildlife poaching.

In February 2014, the BLM declined to renew the Hammonds’ expiring permit to graze on four BLM allotments. BLM’s reason for not renewing their permit was the Hammonds’ substantial non-compliance with the regulations, including the aforementioned arson that followed years of other bad acts by these permittees, including threats and intimidation of federal employees. The BLM rightly defended its decision in the Office of Hearings and Appeals when the Hammonds appealed. After an administrative law judge denied the Hammonds’ request for a stay of the decision, finding BLM’s action was justified, BLM again defended its decision before the Interior Board of Land Appeals, which has not yet ruled.

One might think that, given all the work BLM put into its decision and the subsequent legal defense, there would be no way the agency would back down now. Surely it would make no sense for the agency to negotiate away rational decisions and hard-fought legal wins in favor of placating law-breaking ranchers. Surely, in the interest of protecting competing land uses, the agency would uphold closures meant to protect imperiled wildlife habitat, prevent invasive species infestations, and limit ongoing degradation. 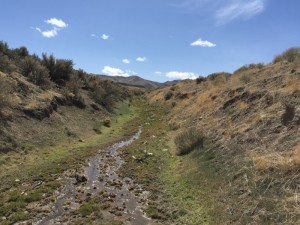 But the BLM has been backing down, giving in, and failing to uphold its field managers’ decisions more and more frequently under your lead. One need look no further than the Battle Mountain District 250 miles south east to see the BLM’s acquiescence to other unreasonable rancher demands. There, following a well-considered drought plan, BLM temporarily closed the Argenta and the Battle Mountain Complex allotments to livestock grazing. Its decisions were upheld following litigation from the ranchers, and the District Manager survived the personal harassment documented in this recent L.A. Times story.  But when the ranchers refused to obey the closures, BLM brought in John Ruhs from D.C. to slap their greedy hands with a pittance of a fine and to ultimately let them put livestock back onto the allotments. After the BLM spent nearly $270,000 dollars on a “collaborative” process figuring out the best way to throw more taxpayer money at the parched Argenta allotment in the form of new range infrastructure, the ranchers have pledged to break the rules again this spring if the authorized grazing isn’t to their liking.

Which is why we really hope you aren’t negotiating with the Hammonds. It’s unfair to the public who expect you to protect their public lands. It’s unfair to the wildlife that shares these lands with the private profits on hooves, and to the humans that benefit from the ecological services provided by wild places and properly stewarded landscapes. It’s unfair to your staff to undermine their hard work and tough decisions in the interest of getting along with criminals. It’s even unfair to the ranchers that do follow the law. But BLM’s impotency in holding criminals accountable practically ensures that more ranchers will decide that following the law is optional.

31 Responses to An Open Letter to BLM Director Neil Kornze