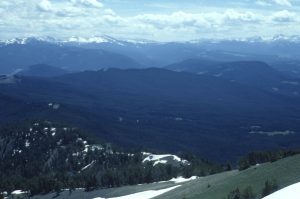 Bob Marshall, Aldo Leopold, and Olaus Murie, legendary biologists and founders of The Wilderness Society (TWS), must be crying in their graves.

When Marshall founded the Wilderness Society, he wrote: “We do not want those whose first impulse is to compromise. We want no (fence) straddlers for in the past they have surrendered too much good wilderness and primeval areas which should never have been lost.“

Marshall would have been chagrined and dismayed to see that the Wilderness Society he founded to fight for wildlands is now among the compromisers he feared.

In the soon to be finalized Custer Gallatin National Forest Draft Forest Plan Alternative D would recommend the Buffalo Horn-Porcupine drainages as wilderness, as well as many other fine wildlands, but sadly TWS, as well as other compromisers like the Greater Yellowstone Coalition and Montana Wilderness Association, are not advocates of Alt. D.

The Wilderness Society “straddlers” are championing a proposal that would feature mountain biking, motorized uses, and perhaps even logging under the guise of forest health in the most critical and biologically important drainages of the Gallatin Range.

The May 10th essay talks about including all the stakeholders but ignores the voiceless stakeholders–the wildlife from grizzlies to bighorn to Wolverine to elk that rely on wildlands for their habitat.

Wildlife in the Greater Yellowstone Ecosystem is increasingly under stress from human encroachment. Recreation is not conservation. Supporting a proposal that allows the best wildlife habitat like the BHP to be a playground for mountain bikers and other recreational “stakeholders” is a crime.

There are plenty of places to ride a bike, but there are few places where grizzly bears, bighorn sheep, elk, and other wildlife can roam. Can’t we at least give them a little bit of room to roam?

If the Buffalo Horn and Porcupine areas are left out of the future Gallatin Range Wilderness and is nothing more than into a mountain bike playground, that will be TWS, GYC, and MWA’s legacy.

That is a legacy that would sadden Bob Marshall and the other founders of the Wilderness Society.

I think I hear their cries.