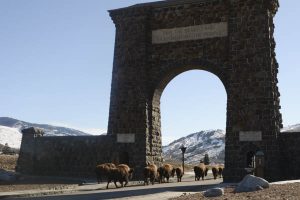 As we ponder the future of public lands in Montana, including what areas deserve protection as Wilderness, it is worthwhile to look back in history to see how past protective measures were viewed.

In 1872 with the establishment of Yellowstone National Park many Montana citizens were outraged. For example, the Helena Gazette opined: “We regard the passage of the act as a great blow to the prosperity of the towns of Bozeman and Virginia City.”

In 1910 the Kalispell Chamber of Commerce opposed the creation of Glacier National Park suggesting the park creation would waste trees that could otherwise be logged.

Upon the establishment of Grand Teton National Park in Wyoming, the local paper predicted that Jackson would soon be a “ghost town.” Has anyone been to Jackson lately? There are more than 16,000 “ghosts” living there.

I go through this litany of responses to protected landscapes to demonstrate how wrong the local perspective has always been about the economic impact of protecting lands.

Unfortunately, logging, mining, livestock grazing, and industrial tourist development has compromised much of Montana’s wild country. A modest amount of this was necessary to create communities.

However, we are way out of balance. Montana only has 3.4% ‎(3,443,038 acres) of its 94 million acre landscape protected as designated Wilderness under the 1964 Wilderness Act. California, by comparison, has 15% of its land area in designated wilderness. California, if it were a country, would have the 6th or 7th highest GPD of any nation. Obviously, wilderness designation hasn’t harmed the economy and indeed it may be one of the contributing factors that make California a desirable place for many people to live.

Despite all this historical evidence, we find many local politicians, including Senator Daines and Representative Gianforte as well as many in the Montana legislation advocating for eliminating protections for Forest Service and BLM Wilderness Study Areas as well as opening up more public lands for resource extraction by timber and oil and gas industries.

In a sense, the widespread opposition to protecting lands based on the presumption that it impedes economic prosperity is no different the wrong-headed opinion of the Helena Gazette about the creation of Yellowstone National Park back in 1871. In a 1948 speech before Parliament, Prime Minister Winston Churchhill warned: “Those who don’t know history are doomed to repeat it.” Are we going to repeat the same mistakes of the past with regards to our wildlands?

Think of what the editors of the Helena paper would say if they could read the findings of a new report from the National Park Service that showed visitors to Yellowstone Park generated $647.1 million in economic benefits to local communities. That figure, as large as it may be, does not come close to the real economic value of Yellowstone’s wildlands.

The above figure does not include the less tangible but real economic value of a large protected area in attracting footloose businesses and individuals. People vote with their feet and choose to live here to be near high-quality landscapes. Many people live in the Greater Yellowstone area who have no direct business connection to the tourist economy, but they pay taxes, employ people, and support communities in countless ways

If you were to incorporate the ecological benefits protected by the park and surrounding protected wilderness areas including values like clean water, carbon storage, wildlife habitat, scenic beauty, recreational opportunities, and the like, its value is easily in the billions of dollars.

As various agencies like the Custer Gallatin National Forest, as well as other forests and Bureau of Land Management agencies,  consider new management plans, in many cases they put resource extraction industries like timber and oil and gas ahead of the protection of wildlands.

For instance, the Lewistown BLM and Missoula BLM Districts recently abandoned recommending protection for tens of thousands of acres of WSAs under their jurisdiction and expanded the areas open to resource development.

In these decisions, they are pushed and prompted by many Montana politicians who don’t know the history. In the name of economic development, they are helping to destroy the very wildlands that are the goose that lays the golden egg. As Churchill predicted, those who don’t know history are doomed to repeat it.

6 Responses to Lessons From Yellowstone