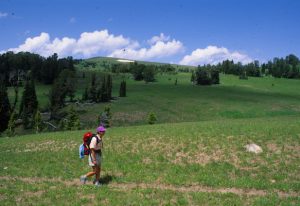 Montana has a wilderness deficit. People may be surprised to learn that only 3.4 million acres out of the state’s nearly 94 million acres are congressionally designated wilderness under the 1964 Wilderness Act. There are at least 6.3 million more U.S. Forest Service acres that potentially could be designated as wilderness, as well as additional lands managed by the Bureau of Land Management, Fish and Wildlife Service and National Park Service.

Among the areas that deserve wilderness protection are the Great Burn outside of Missoula, Scotchman’s Peak south of Libby, the Blue Joint near Darby, the Sapphires by Hamilton, the East and West Pioneers near Dillon, the Ten Lakes and Whitefish Range near Kalispell, the Snowcrest and Gravelly Ranges by Sheridan, the Badger-Two Medicine by East Glacier, the Big Snowies outside of Lewistown, the Lionhead by West Yellowstone, the Gallatin Range by Bozeman, the Crazy Mountains by Livingston, Bitter Creek by Glasgow, Mount Baldy by Helena, the Pryor Mountains by Billings and the Terry Badlands near Miles City.

This is only a partial list of Montana’s wildlands that could be given federal wilderness designation.  Keep in mind that these are among the finest wildlands left in the entire United States. They deserve to be left unimpaired for future generations. All of these areas are included in the Northern Rockies Ecosystem Protection Act which has been introduced into Congress.

We often hear opponents of wilderness arguing that the designation of more wilderness will somehow harm the state’s economy. California, which is only slightly larger than Montana, has nearly five times as much acreage in the wilderness, with 15.3 million acres in the federal wilderness system. California remains one of the economic powerhouses in the entire world. Wilderness designation has not harmed the California economy.

Increasingly, Montanans recognize that protecting our wildlands is key to the state’s economic prosperity. While the clean water, wildlife and scenic grandeur are critical to the state’s growing tourism industry, it’s important to note that preserving wildlands goes beyond direct tourism employment.

Many people live or move to the state due to the proximity of wildlands. Over the years, I have lived in Missoula, Helena and Livingston. I never had a “local” job, with nearly all of my income from sources outside of the state. However, I spent my earnings locally, buying supplies, food, owning property and paying taxes that otherwise supported the local economy and community.

I am not alone. Non-labor income contributes to 44% of Montana’s citizen’s earnings.

I would argue a contributing factor in the decision by many people to live has to do with the attractiveness of the state’s wildlands —whether one goes into them or not.

In the age of climate change, protecting these wildlands also stores a significant amount of carbon and preserves the ecological processes that maintain biodiversity.

However, I do not wish to dwell too much on the economic value of wildlands protection — as vital as it may be to some. The real value of wilderness protection is the cultural value it engenders. When we designate wilderness, we are expressing humility, restraint and a sense that nature is bigger than us. These are critical conservative values for society to express.

The designation of wilderness shows a commitment to not only future generations but also to all the creatures who do not have a voice at the table. These the voiceless critters that need wild places to survive.

Protecting wildlands is a counteraction to the old paradigm of colonization, subjugation and servitude. It is a recognition that we humans as a society, can observe and practice limits. Wilderness designation is our society’s way of expressing a sense of the “sacredness” of the Earth.