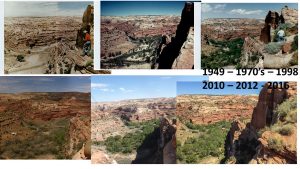 Among the more egregious recent decisions of the Utah Bureau of Land Management is to open 50,000 acres of the Escalante River within the Grand Staircase Escalante National Monument to renewed livestock grazing. The Escalante was so remote that it was the last major river to be mapped in the lower 48 states.

The lush river bottom, situated between sinuous sandstone cliffs with springs, waterfalls, and emerald pools, is a desert delight. The river flows south into the Colorado River within Glen Canyon National Recreation Area.

The same lush vegetation was a natural attractant for livestock in need of forage, shade and water. And the narrow canyon, surrounded by miles of slickrock sandstone with little forage and no water means all livestock use is concentrated in the narrow green corridor.

As a result of more than a hundred years of livestock grazing, the Escalante channel had little riparian vegetation.

Years ago when livestock were common in the river bottom I hiked part of the canyon. The river was relatively easy to hike back then because it more or less a sandy wash with few willows and cottonwood to impede one’s movement. The water was fouled with manure and finding a campsite without cow pies was difficult.

However, the impact on my recreational experience is the tip of the iceberg for the loss of riparian vegetation meant the river was a skeleton of its former self.

The Escalante region was recognized decades ago for its outstanding wildlands qualities. Back in the 1930s the Escalante Canyon and surrounding lands were identified by Bob Marshall, founder of the Wilderness Society, as one of the largest roadless areas in the United States outside of Alaska. There was even a proposal to create a huge national park centered on the Escalante Canyons.

The area was given partial protection when President Clinton declared Grand Staircase Escalante National Monument in 1996.

The establishment of the national monument created the momentum for the Grand Canyon Trust to restore the river riparian areas begun in 1989 when the first livestock grazing privileges were purchased and the allotment closed.

Since that time additional voluntary grazing permit buyouts by the Grand Canyon Trust led to the removal of cattle from the river riparian areas. Cow-free for 20 years, combined with the removal of Russian Olive, another exotic species, has permitted the native willows and cottonwood to recover from a century of livestock abuse.

With the removal of livestock, the riparian corridor has recovered. With the additional removal of Russian Olive, another exotic plant, the transformation of the Escalante into a biological hot spot is nearly complete.

Numerous studies have shown that 70-80 percent of all western wildlife depends on these thin green lines of green lush vegetation for their survival whether it is a place to feed, roost, hide or swim. Indeed, among species that are likely to be harmed by the reintroduction of livestock are Flannelmouth sucker, Bluehead sucker, Roundtail chub, speckled dace, Bell’s vireo, Lucy’s warbler, Virginia’s warbler, and northern leopard frog. Loss of native riparian habitat will also harm Neotropical migrants, such as Lucy’s warbler, Virginia’s warbler, Yellow-breasted Chat, Bell’s vireo, and Bullock’s oriole as well as several hummingbird species. River otter and beaver are once again common.

Agriculture accounts for only 8.1% of private employment in Garfield County where the river is located, while tourism accounts for 57%. In addition, some 45% of income comes from non-labor sources. In other words, people without outside income are choosing to live in this area. One can speculate that the natural attractions of the canyon country is at least one reason for their choice of Garfield County as a place of residence.

There is no doubt that the degradation of the river will harm the local economy.

But beyond the economic impacts, the ecological losses will be even more significant. Loss of such a critical riparian area in the midst of slickrock desert is a huge potential shock to the area’s ecosystem integrity.

The decision of the Utah BLM to open the river corridor to abusive livestock grazing once more is a disgraceful breech of public trust and agency responsibility.

Interested parties can voice their opposition to the current plan by writing escalante_interagency@blm.gov or sending a letter to them at 755 W. Main Escalante, UT 84726