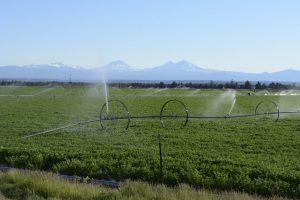 The Fish and Wildlife Service will soon be reviewing a Habitat Conservation Plan (HCP) for Oregon’s Deschutes River written by contractors working for the Central Oregon irrigators. The HCP will dictate the future of the river.

The goal of the irrigators is to obtain a “get out of jail free” pass for their impacts on endangered or threatened species that depend on the Deschutes River for habitat, including Oregon spotted frog, bull trout in the upper river, as well as chinook and sockeye salmon and steelhead downstream.

If the HCP is approved, the irrigators will not be held accountable for any future declines in any of these species that can be attributed to their annual dewatering and destruction of the river function.

The Deschutes River once had the evenest water flow of any western river, and due to the many springs at its sources, it was exceedingly clear. The river is today is a shadow of its former self because Central Oregon Agricultural interests have enslaved it. The irrigators remove up to 90% of the flow to grow low-value crops like hay and alfalfa for livestock feed that can be grown elsewhere in the country without dewatering one of the most beautiful rivers in the West.

Here are a few questions people might ask about the HCP and irrigation withdrawals in general.

Why are irrigators legally permitted to degrade our river? Every year tens of thousands of fish are killed in the Deschutes River due to Ag water withdrawal, not to mention the overall degradation of the river ecosystem from sedimentation, channel widening, and radical changes in flow regimes. If a fisherman or fisherwoman were to keep one or two extra fish over the daily limit, they would be fined for “poaching,” but if irrigators kill tens of thousands of fish and destroy the river channel, they suffer no legal consequences.

According to Oregon law, the citizens of Oregon, own the water in the river. Despite what you may hear from irrigators, a water “right” is really a privilege. The irrigators do not have automatic access to the water Oregon citizens own. Rather the people of Oregon can permit water to remove, or alternatively, they can demand that water be left in the river to maintain aquatic ecosystems.

The Oregon Supreme Court has ruled that the primary use of river water is to maintain fisheries, ecological function, aquatic ecosystems, and so forth. Any other use like irrigation cannot legally damage or destroy the primary purposes.

Thus, a good starting question is to ask why the public has to tolerate the destruction of its river to facilitate the private profit of farmers and ranchers who are the primary consumers of Deschutes River water?

We might also want to know why irrigators can remove up to 90% of the river’s flow without paying a cent to the public for this water. That’s right; the irrigators get to take our water and pay nothing for it.

The majority of water that is taken from the river does not grow “local food.” In Deschutes County, out of approximately 45,000 acres that are irrigated by the Central Oregon Irrigation District, only 239 acres planted to “specialty crops” like vegetables. Indeed, 91% of all acreage in the Deschutes Basin watered by our water is for pasture or hay production. Much of the hay/alfalfa being exported out of the basin. Some of the hay is even exported to China. So, we are essentially exporting the Deschutes River water (in the form of hay) to other states and countries. Is this really “wise use” of scarce water in the desert?

Even the 9% of the irrigated acres (most near Madres) that are devoted to crop production isn’t necessarily feeding local people—for instance; seed carrots constitute a significant crop in the basin; however, the bulk of these carrot seeds are sold outside of the local market.

Most of these crops, especially hay/alfalfa, can be grown in other parts of the country. Does it make sense to use the Deschutes River water to grow something that is widely cultivated elsewhere in the country, often without irrigation at all?

According to the HCP, the public will largely be subsidizing any improvements in irrigation equipment and delivery, like installing piping for canals (at the cost of nearly 1 billion dollars) to get some of OUR water back in the river to help the wildlife and river ecosystem. Ask why taxpayers should have to pay to fix the damage created by industry?

Would you consider it fair if the owner of a factory polluting the river asked the public to pay a billion dollars to install some pollution control devise to preclude polluting the river? Or would you suggest that the factory and ultimately the people using the products produced by the factory, should pay for the pollution controls? It’s the same issue with the Deschutes River.

Why should we the public pay for irrigation improvements? Shouldn’t those who consume the products of irrigation—those using hay, alfalfa, or even carrot seeds—shouldn’t they pay for reducing the degradation of the river?

If the preferred alternative in the HCP is chosen and implemented, most of the additional water (our water) that “may” be returned to the river will occur 25-30 years out from the plan’s adoption. So, any improvements that might result will be decades in the future. Should we have to wait decades while the river continues to be degraded for private profit by irrigators to see if the plan will work?

We must start to question why we must continue to permit our rivers to be enslaved for the benefit a small segment of society who profits from this enslavement, while our wildlife, water quality, and aquatic ecosystems suffer.

Interested citizens can write their Congressional representatives, as well as post comments on the Habitat Conservation Plan. Online at https://www.regulations.gov:

Comments must be postmarked on or before, or received by, Dec 3 rd, 2019. Submit by U.S. mail or hand delivery to: