This is a “destroyed” forest “devastated” by a high severity blaze. But the abundance of flowers, aspen and shrubs makes this burn incredibly important for wildlife.  Photo by George Wuerthner

I am again reading about a forest service plan for logging/thinning based on the idea that wildfires “destroy” the forest. Whether the agency is discussing the Blue Mountains in Oregon, the Custer Gallatin NF, and Helena/Lewis and Clark National Forests in Montana or the Medicine Bow National Forest in Wyoming, they all recommend extensive logging to preclude or prevent what they call “destructive” high severity fires.

How you refer to something influences how you think about it. So calling wildfires “destructive,” “catastrophic,” a “disaster,” or other negative adjectives, does create a world view that sees wildfire as something to control or even eliminate if possible.

Logging is typically proposed as the “cure” for many of the ailments that influence forest ecosystem. For instance, the Custer Gallatin National Forest justification for the North Bridger “Forest Health” Project by Bozeman, Montana, lists these reasons for forest “management.”

 Reduce the susceptibility of vegetation to subsequent insect and disease activity

Tree mortality from natural features as opposed to “chainsaws” is critical to healthy forest function. So important are dead trees that in many landscapes the second-highest biodiversity is found in burns, areas of high mortality from bark beetles, drought, and other factors.

Dead trees store much more carbon than the forest products that are produced by the timber industry.

Dead trees are essential to forest wildlife, with some estimates suggesting that as much as 2/3 of the wildlife species in North America depend on dead trees at some point in their life cycle.

Dead trees are even critical to the aquatic ecosystem. In most small to mid-size rivers, down trees create the majority of habitat for insects and fish. Even birds and bats benefit from these fallen trees. Higher insect populations found in streams with a lot of dead wood attract more bats and birds. 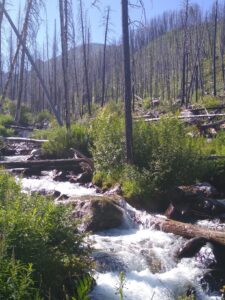 Snags and down wood are essential to aquatic ecosystems. Photo by George Wuerthner

The opening of the forest canopy resulting from tree morality creates ideal conditions for the reproduction of flowers and shrubs, which provides food for small mammals. This is one reason why spotted owls prefer to nest in old-growth forests, often forage in recent burns where rodent populations are much higher.

Many species of trees depend on periodic events to successfully reproduce. Aspen, for instance, are stimulated to send up many shoots from their roots if the above-ground tree boles are killed by fire. Ironically while the Forest Service seeks to preclude high severity blazes that stimulate aspen, they often recommend logging to stimulate aspen regeneration. 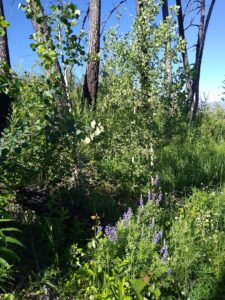 Many of these benefits only occur if there is a “high severity” fire, which the Forest Service seeks to prevent. This is because of a failure or more likely a bias the agency has against wildfire in general. We are continuously told that “low severity” “frequent” fire use to “clean up” (tidy up like maid) the forest, and these kinds of fires are desirable. But the big nasty high severity fires that kill trees are unwelcome.

The idea that “low severity” fires were the norm resulted from early fire science work in southwest ponderosa pine forests where high frequency, but low severity blazes are the norm. Then this fire paradigm was extrapolated to all other forest types.

But this is how the Forest Service perverts forest science. Episodic high severity burns dominate the majority of vegetative communities in the West. In other words, such fires are rare—often hundreds of years apart—but necessary for healthy forests.

Such high severity blazes are controlled by extreme fire weather rather than fuels. Thus “fuel reduction” projects are unlikely to preclude or prevent high severity blazes. Furthermore, the probability of such blazes affecting any particular patch of forest is extremely low.

Yet by thinning the forest to preclude fires or bark beetle attacks or whatever the public gets all the negatives associated with logging projects including sedimentation from logging roads, the spread of weeds, loss of carbon, disturbance to sensitive wildlife, forest fragmentation, shifts in age structure of forest trees, loss of biomass, and soil compaction to name just a few of the impacts that are guaranteed now to preclude something that might not occur for decades or centuries.

For instance, although there is always background mortality, the ecological input of many, many down trees into a stream may only occur once in a hundred or two hundred years. And this essentially the only major input of logs that the aquatic ecosystem will receive for decades. 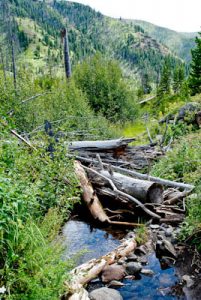 Not only do forest ecosystems depend on these episodic events, but they also require them.

That why it is so ironic that the Forest Service says it is going to thin the forest to preclude tree morality from wildfires, bark beetles, mistletoe, root rot, drought, and whatever else naturally thins and transforms forest communities.

I am at a loss in explaining the timber industry bias of the agency other than forestry schools, often depending on timber industry funding. For instance, the Oregon State Forestry School gets up to 20% of its funds from the timber industry through a tax on timber products. Though the Upton Sinclair quote may explain it. “It is difficult to get a man to understand something when his salary depends upon his not understanding it.”

If you are a forestry professor at Oregon State or other forestry school around the country, you know your job is to promote the timber industry. Without logging, there would be no jobs for foresters and no reason for forestry professors and forestry schools. So, there is an economic bias to find any rationale for logging. Of course, the Forest Service is also under pressure from the Trump administration to log more of the national forests. If you are a Forest Service employee, you know your marching orders.

The bottom line is that our forest health is dependent on episodic events that cause significant mortality. This is not only natural but required for “healthy forest ecosystems.” By contrast, the logging/thinning paradigm advocated by the Forest Service degrades our forests by removing biomass (read wildlife habitat), carbon, and the physical structures like down wood that maintain ecological function.