By Greta Anderson On August 12, 2020 · 40 Comments · In Mexican Wolves, Wolves and Livestock, Wolves and Prey 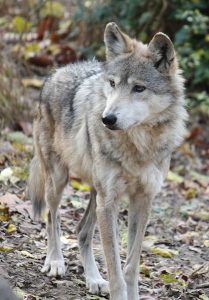 Mexican gray wolves are blamed for all kinds of livestock deaths in Catron County, and so we wanted to see for ourselves, by reviewing depredation reports, how USDA Wildlife Services is investigating dead livestock and arriving at determinations that Mexican wolves are to blame. Spoiler alert: It’s not particularly convincing. (I’ve written about this before, here, but I wanted to provide more examples for those of you who are following the story.)

For example, in this report from January 31, 2019, the remains of a 2-day old calf became a “confirmed” wolf kill. (Calving on public lands at 7100 feet in January seems crazy to us, but that’s another story.) Less than ¼ of the carcass was remaining, and it had already been moved from the place where it was found. There is no photo showing the carcass on the landscape, only the remainder of a calf’s rear legs on the bed of a truck. Nonetheless, the investigators determined that it was eaten from rear end to head (the pattern consistent with wolves), despite having no head or torso or anything with which to determine the order of feeding. They found canine spreads and compression marks on the skin, neither of which proves the calf was alive if (or when) it was eaten by something with 40.4mm to 42.3mm canine teeth, dimensions that also could be attributed to feral dogs or mountain lions. It is important to note that there are also no photos of the compression spread alleged in the report. But rather than even consider it “probable” wolf kill, the investigators CONFIRMED it.

Here’s another one, from the same time period, which happened to be during the government shutdown of 2019. The Wildlife Services’ agent wasn’t working, so when s/he came back to the office, they “peer reviewed” someone else’s work. Likely, but not demonstrably due to redactions, this someone else was Jess Carey, Catron County’s private wolf investigator. As far as we can tell, Carey’s only biological qualifications are a long-time disdain of wolves. The report shows another dead calf on the back of a pick-up truck. The only evidence was rolled-over rocks and “canine spreads located on the hock of the calf.” Oddly, the photos also show compression spreads (supposed to show where the wolf clamped down) but there is no evidence of the kind of hemorrhaging that would indicate the calf was alive when those bites occurred. The Prieto Pack was in the area at the time, so this was another CONFIRMED kill. Ka-ching!

Here’s another one where they admit there’s no evidence – none – but considered it to be a PROBABLE wolf kill, for which compensation drops to 50 percent but is still $975.00. This determination was based on other wolf kills having occurred in the area, and nothing else. And curiously, they didn’t find any bite marks on the carcass, but also said coyotes had fed on it.

And here’s yet another one where a Mexican wolf (at most, 80lbs) killed a bull (which run 1,800 pounds on average), despite there being other livestock in the area, which goes against all wisdom about predators killing the easiest prey. Even the larger Northern Rockies wolves rarely if ever prey on bulls, but this smaller subspecies of Mexican wolves somehow manages to do so frequently. Admittedly, sometimes their methods are a little odd.

But I don’t want to just pick on Catron County, because the Wildlife Services is responsible for investigating possible wolf kills even without the, ahem, ‘expertise’ of Jess Carey. Maybe this one near Vernon in Apache County, Arizona would raise some flags? The cow had been dead about 14 days but the other cows in the pasture were still nervous when Wildlife Services showed up. The remains were carried out of the field by the rancher and, literally, it’s nothing but a piece of a leg. The report says there are photos taken of the site and attached, but they aren’t. There’s no evidence of hemorrhaging (which is evident whenever a predator kills a large animal, rather than scavenging an already-dead carcass) in two of the photos that claim to show it, either. And without any evidence but some teeth marks (whose dimensions, again, overlap with other predators), this “wolf kill” was CONFIRMED. Looks like Arizona’s Wildlife Services has some explaining to do too.

We sincerely hope that federal officials are paying attention to these suspect reports, and that whomever is signing off on them is going to get fired. If this is just sloppy work, that’s unacceptable. If this is intentional fraud, that’s a felony. And in any case, these fraudulent determinations are harming the recovery of Mexican wolves in the southwest, and that’s the biggest crime of all.

Update: I’ve asked the New Mexico Director of Wildlife Services if he’d like to respond to this post and I offered to post his explanations here. I’ve also asked what he plans to do about these suspicious reports. Stay tuned! – greta