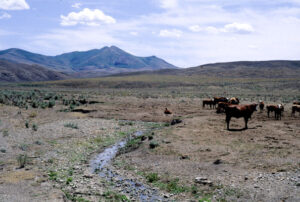 Senators Steve Daines of Montana and Diane Feinstein of California have once again introduced legislation, the “Emergency Wildfire and Public Safety Act of 2020” that is based upon misguided assumptions that fuel reductions will preclude the large blazes occurring as the West.

Never mind that climate change is the driving force in all these fires as was recently documented in a paper (Jones et al 2020). Though the bulk of the legislation is aimed at increasing the logging of our public lands, there is also a provision for targeted livestock grazing as a panacea for wildfire.

The basic idea behind targeted grazing is that livestock will consume grass and other vegetation and thereby reduce the spread of wildfire. There is some rationale to the idea—less fuel under “normal” fire weather conditions can influence fire behavior.

However, almost all large fires—the fires that this legislation is designed to halt–occurs during extreme fire weather conditions (Keyser A. and Westerling, A, 2017). These conditions which include drought, low humidity, high temperatures and high winds overrides the normal influence of fuels.

Furthermore, grazing to the degree where fuels are significantly reduced has collateral damage that is frequently ignored.

The idea that heavy grazing can improve ecosystems has been disputed by many studies (Carter, J. et al., 2014)

Grazing to the point where fuel reductions will be effective in slowing or halting fires requires cropping vegetation to the level of a manicured golf course.

In achieving such fuel reductions, hiding cover for small mammals, reptiles, and birds is reduced. Forage and pollen for insects is removed. Forage that would otherwise feed native herbivores from ground squirrels to elk is removed. Soils are compacted. Weeds are spread (Belsky, A.J., and J. L. Gelbard, 2000)

The banks along streams are broken down (Kauffman B. and W. C. Krueger. 1984, Belsky, J.A., A. Matzke, and S. Uselman, 1999). Biocrusts (which cover the soil between bunchgrasses and reduces erosion) are destroyed. Water is polluted by livestock feces (Wuerthner and Matteson 2002).

A further impact of livestock production in the arid West is the consumption of water for irrigation and its impacts on aquatic ecosystems. Irrigated agriculture for livestock forage production is the biggest consumer of water in California as well as much of the West (Reisner, Mark, and Sarah Bates. 1990; Hanson, Brian. 2020). The consumption of water for irrigated forage production is a major factor in the decline of native fish around the West (Minchkley, W.L., and J.E. Deacon. 1991; Richter, B.D. et al., 2020).

Livestock grazing is also responsible for the killing of native predators (Treves, A. et al., 2019)

It is worth noting that much of the terrain under public lands management never had significant grazing pressure from large herbivores like bison (Mack and Thompson 1982, Bailey, James A., 2016) and are often harmed by heavy grazing. For instance, it can take a native grass like bluebunch wheatgrass up to 10 years to recover fully from severe grazing pressure (Anderson, L. 1991).

Despite claims by Allan Savory and others that livestock grazing can reduce greenhouse emissions and sequester carbon (Savory, A., 2013), most researchers conclude that domestic livestock emissions are one of the major factors driving climate change (Myers, Bruce, 2014) which is creating the extreme fire weather conditions driving wildfires.

These are only a few of the ecological impacts that result from the severe grazing necessary to significantly alter fire behavior. And we will see later, even this kind of severe grazing usually will not stop a wind-driven fire occurring during extreme fire weather.

Alternatively, and far more critical these days, livestock grazing is one of the major factors in the spread of cheatgrass, an annual exotic, that is extremely flammable (Williamson, Matt. A. et al. 2019, Belsky, A.J. and J. L. Gelbard, 2000).

Although grazing is often trumpeted as a means of reducing fuels (Bailey, Derek W., et al. 2019) and thus wildfire, especially by “targeted” grazing and fuel reductions. (Diamond, Joel, Christopher A. Call, and Nora Devoe 2009). The claims must be scrutinized closely.

For instance, a study done in Arizona concluded (with modeling) that light utilization (26%) in treated sites, the BehavePlus fire model predicted that herding and supplement reduced fire rate of spread by more than 60% in grass communities and by more than 50% in grass/shrub communities (R.A. Bruegger et al. 2016).

Another study that looked at fuel breaks created by targeted grazing and other measures like bulldozing native vegetation cautioned that the “cure might be worse than the disease” since the destruction of soil biological crusts and loss of native grasses that occur with targeted grazing, bulldozing. Other fuel reductions create the disturbance habitat that favors the spread of cheatgrass (Shinneman et al 2018).

None of the studies that promote grazing to reduce fuels considers the unavoidable ecological impacts that accompany grazing. These include water pollution, soil compaction, trampling of biological soil crusts, the spread of weeds (as with cheatgrass), the social displacement of wildlife (like elk), and the loss of forage wildlife and insects, and costs.

While targeted grazing and the ecological impacts that result might be acceptable for small areas, say to reduce vegetation around a home or some other limited area, it is not effective or acceptable on a landscape scale. As such, it cannot aid in reducing large wildfires.

Bailey, James A., 2016. Historic Distribution and Abundance of Bison in the Rocky Mountains of the United States. Intermountain Journal of Sciences, Vol. X, No. X, 201X

Condon Lea and David Pyke. 2018.  Fire and Grazing Influence Site Resistance to Bromus tectorum Through Their Effects on Shrub, Bunchgrass and Biocrust Communities in the Great Basin (USA) https://link.springer.com/article/10.1007/s10021-018-0230-8

Minchkley, W.L., and J.E. Deacon. 1991. Battle Against Extinction: Native Fish Management in the West. U of Arizona Press

Savory, A., 2013. How to fight desertification and reverse climate change. https://www.ted.com/talks/allan_savory_how_to_fight_desertification_and_reverse_climate_change/transcript?language=en