It’s been a while since there’s been news about public lands rancher/wolf killer Craig Thiessen from New Mexico. He’s the guy who pleaded guilty to killing a trapped Mexican gray wolf pup (named “Mia Tuk” by an Albuquerque schoolkid) with a shovel in 2015. He got off relatively easy for violating the Endangered Species Act and was mysteriously never prosecuted for animal cruelty by New Mexico, but the U.S. Forest Service took his violation of the grazing regulations very seriously and they yanked his grazing permit in November 2018. 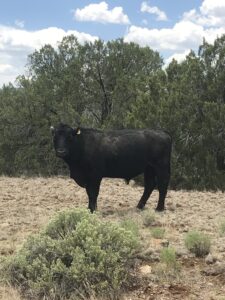 Thiessen appealed the loss of his permit all the way up to the regional director, who affirmed the District Ranger’s decision and ordered the cows off Canyon del Buey allotment by the end of August 2019. As you can probably guess, Thiessen defied this direction and his cows are still in trespass on the Gila National Forest. There’s been some legal back and forth between Thiessen and the feds and that process is ongoing (more on that here soon), but there’s something else for the taxpaying public to be enraged about:

Canyon del Buey LLC was the largest recipient of Farm Bill livestock subsidies in Catron County in 2019, raking in $135,683 dollars of federal funding. Of that, $119,029 came under the “Livestock Indemnity Program” which is designated for livestock losses in excess than usual due to extreme weather or due to animals reintroduced by the federal government, i.e. wolves. It’s impossible (so far) to determine whether the Thiessens got money for extreme weather or livestock depredations, but at about $1,000K per head (see page 6 at link), that’s a whole lot of dead cows we taxpayers are paying for. (And it’s not the first time: Craig Thiessen has also received almost $400,000 since he whacked Mia Tuk.)

This was in addition to the $9,550.50 Craig Thiessen got for claimed wolf depredations in 2019. Not clear which livestock were his, but as we’ve shown, many of the Catron County wolf depredation reports are a little more than fishy. At least that $9,550.50 came out of a privately-established compensation fund (the “Groves Estate”) and not taxpayer pockets, but it’s kind of offensive that someone who admitted to bludgeoning a wolf pup to death with a shovel can turn around and get money for his dead cows. It’s almost as if the game is rigged to benefit wolf-hating ranchers.