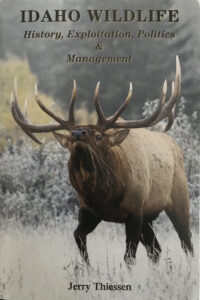 There’s a new tome on Idaho’s wildlife, and it goes beyond the field guide approach to include in-depth historical research and a digest of archival material that might otherwise have been lost. Authored by former Idaho Game and Fish Regional Supervisor Jerry Theissen, the book Idaho Wildlife: History, Exploitation, Politics, & Management spans more than a century of wildlife conservation achievements and failures. It recounts political interference in wildlife management by the extractive industries that have a vested interest in foiling wildlife conservation efforts, and also provides insightful commentary on efforts past and present to conserve the state’s wildlife.

At one time, I was among a few dozen actively publishing moose scientists in the world, and I’ve read much of the scientific literature on moose, the topic, so I went straight to the chapter on Shiras moose. The biological account of the species is quite accurate, and the accompanying historical accounts of the original extent of moose range, near-extirpations due to overhunting, and subsequent expansion throughout the Rocky Mountains, were enlightening. I learned a lot.

One of the interesting historical aspects highlighted by the book are the pitched battles between the sheep and cattle industry and sportsmen groups that happened during the first half of the 20th Century. Today’s issues of access privileges and private land habitats prevailed then as well, but hunting and fishing groups fought against livestock producers back then to bring back native species in the face of political crosswinds. Today, the sportsmen’s lobby is all but invisible in Idaho (except for the NASCAR sportsmen bent on driving native carnivores extinct), and wouldn’t dream of taking on the agriculture industry, even to advance the interests of hunted or fished species. It makes one wonder: What happened?

The book explores the massive die-offs of bighorn sheep in the 1880s and 1890s as a result of diseases spread by domestic sheep, efforts to wipe out wolves using bounties from the 1920s, and politicians’ efforts to use the power of the purse-strings to strangle wildlife management agencies during the 1930s. Past is prologue, and a lot of the past battles highlighted in these historical accounts mirror the struggles today in Idaho between conservationists and anti-conservation forces, with eerie similarity. It just goes to show how far Idaho hasn’t come – it’s a state still mired in the Dark Ages of anti-conservation politics.

While one could argue that the overwhelming focus of this book is on game species (like state conservation efforts themselves), and the writing can be rough-hewn, Idaho Wildlife is a valuable compilation of historical facts and anecdotes that sheds significant light and perspective on today’s struggles to protect and restore native species in Idaho. This book provides a worthy perspective on wildlife issues, and is a useful reference on state history that will add to the reader’s knowledge and understanding of wildlife conservation in the state, and by extension, in the American West.

The book is available on the internet at alibris.com by typing in Thiessen, Jerry as the author or the ISBN 9780578661490.

Erik Molvar is a wildlife biologist and is Executive Director of Western Watersheds Project, a nonprofit conservation group dedicated to protecting and restoring wildlife and watersheds throughout the West.