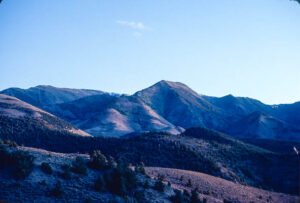 The Humboldt Toiyabe National Forest (HTNF), primarily in Nevada, has 40 vacant allotments. Vacant allotments mean they once were grazed, but for various reasons currently do not have any livestock grazing.

Rather than permanently closing allotments that are currently ungrazed, the Forest Service in a recent call for scoping comments seems intent on creating more public conflict by restocking vacant grazing allotments. The proposed action description and other information are available for review at http://www.fs.fed.us/nepa/fs-usda-pop.php/?project=59389 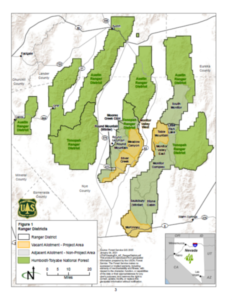 Yellow highlighted areas are the general location of grazing allotments.

Permits for the McKinney, Meadow Canyon, and Silver Creek allotments expired and were not reissued in 1994. The Table Mountain, Monitor Valley East, and Monitor Valley West allotments were canceled for non-compliance issues from the permittees. All six of these allotments have been ungrazed (except for trespass livestock) since the 1990s.

The Forest Service seems intent on restocking these allotments. The logic goes like this. The HTNF plan (done in 1986 or 27 years ago) suggests that livestock grazing is “permitted” on the forest. But just because something is permitted does not mean it must or should occur. Whether restocking these allotments is really in the public interest should be one of the significant discussions in any EA.

A complete evaluation of the multiple impacts of livestock grazing on other public values, as well as the economic costs associated with livestock impacts, should be done before any decision to restock allotments is considered.

From a public interest perspective, it behooves the FS to prove beyond a doubt that livestock grazing is a benefit to American citizens, not just the permittees who will be utilizing these lands. 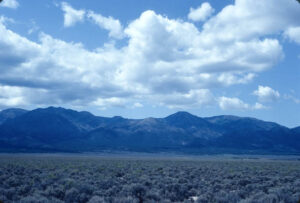 To minimize public oversite of its lands, the Forest Service requires that one must establish eligibility to object to the draft decision that will be released following completion of this National Environmental Policy Act review. In other words, if you want to influence how your public lands are managed, you must submit scoping comments. Submit your comments online at https://cara.ecosystem-management.org/Public//CommentInput?Project=59389

IMPORTANCE OF THESE ALLOTMENTS

Several of these allotments are within the Alta Toquima Wilderness and Table Mountain Wilderness. 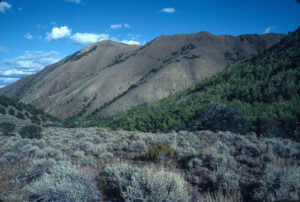 The Alta Toquima Wilderness was designated in 1989 and covers 35,860 acres. The glacier-carved Mount Jefferson, the highest summit, rises 11,941 feet. 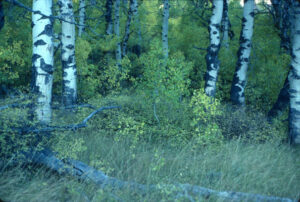 The Table Mountain Wilderness in the Monitor Range is cloaked in aspen. Photo George Wuerthner

The Table Mountain Wilderness covers part of the Monitor Range, which rises to 10,430 feet. The wilderness was also established in 1989, and it now totals 92,627 acres. It consists of a large plateau covered with aspen.

While livestock grazing is permitted in wilderness under the 1964 Wilderness Act, it is only allowed if it does not substantially degrade wilderness values. It is difficult to see how exotic animals (cows), polluting water, consuming forage that would support native animals, degrading riparian areas, spreading weeds, and providing an excuse to kill native predators enhances wilderness values. Plus, “range developments” like fences, spring troughs, piping, and other construction designed to facilitate livestock use of these areas also detracts from the wilderness values. You might want to make this part of your scoping comments.

The restocking of these vacant allotments seems likely to invite a repetition of the Sagebrush Rebellion of the 1980s or an expansion of the ongoing Bundy rebellion. 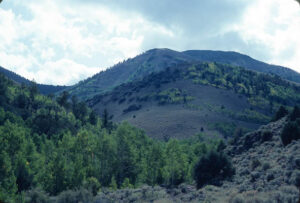 Pine Creek within the Toquima Range was the focus of a legal battle over government authority to manage livestock on public lands waged by rancher Wayne Hage. Photo George Wuerthner

The area in and around the Alta Toquima Wilderness was a significant controversy in 1991 when the Forest Service seized 100 head cattle owned by of rancher Wayne Hage over multiple grazing violations. (This was back in the day when the federal government confronted violators, unlike today when hooligans like Cliven Bundy illegally grazes livestock in Nevada unmolested).

Hage had a long history of conflict with the federal government. He bought the Pine Creek Ranch in 1978. Pine Creek drains out of the Alta Toquima Wilderness. The ranch included 752,000 acres of public lands grazing allotments. Almost immediately Hage objected to the presence of elk grazing on these public lands suggesting they conflicted with his “right” to graze livestock. Between 1980 and 1990, the FS sent Hage 40 letters reprimanding him for overgrazing the public lands and ordered him to remove his cattle. The FS made 70 visits to the Pine Creek allotments.

After repeated warnings, the HTNF impounded some of his cattle and sold them. Hague reacted by billing the Forest Service $28 million. Later more of his grazing allotments permits were canceled.

Hage became the darling of the livestock industry which supported his efforts to challenge the federal government’s authority to manage private livestock using public resources.

Over time, and many lawsuits, Hage (who died in 2006) and then after his death, his son continued the conflict. They argued that they owned the water on public lands, and they had a “right” to graze their cattle without a permit.

At first, Hage prevailed in the court cases, but ultimately in 2016, the Ninth Circuit Court ruled that the government had the right to manage public lands and that Hage’s cattle were trespassing, and by 2019 all legal suits were settled. Of course, like Cliven Bundy, the Hage’s got to graze their cattle on public lands for decades without having to pay for the forage or privilege.

Now the HTNF is considering “restocking” the old Hage allotments and others.

There are numerous issues to consider and question. You can write the FS and ask them to consider these points.

First, strongly argue that restocking these allotments that are vacant will only result in more conflicts over public land management. It is impossible for livestock to graze these arid lands without damaging public values. The Forest Service should permanently retire these allotments.

Failing that, at the very minimal, the FS should maintain vacant status until it can demonstrate that it has the funds to do adequate monitoring, and recovery of all vegetation, riparian areas, and other considerations are met.

Another problem has to do with the standards the FS is using to evaluate livestock impacts. The FS suggests that it will allow livestock to consume 45% of the grass and other plants on most allotments. In other words, nearly half of all annual biomass will be allotted to private livestock.

This level of heavy use often harms grass plants and other vegetation, particularly in drought situations which cannot fully recover from the loss of photosynthetic material unless rested for years.

Grazing at this level can also harm native species in numerous ways, but frequently livestock use is much higher, particularly in wet meadows and riparian areas. Since the FS often “averages” use over the entire allotment considered suitable for livestock, uses in critical areas typically exceed these standards. The FS should do annual monitoring while cattle are on the allotment to determine when forage consumption has exceeded standards and immediately remove livestock.

The Forest Service claims that it will only reauthorize grazing if the allotments maintain LRMP desired conditions. That all sounds nice in theory, however, in most situations the FS does not have the funding to do proper monitoring and follow-up.

A frequent problem with all public land management is that the agencies aspire to maintain minimum conditions, but they often lack the personnel to do proper follow-up and monitoring. The FS should show how it will fund monitoring and cancel grazing if adequate funding is not available. 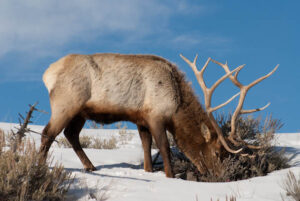 Elk are socially displaced by the presence of livestock, not to mention nearly half of the annual forage production is proposed to be allotted to livestock means that much less for wildlife like elk. Photo George Wuerthner

Some of these allotments have growing elk herds. The proposed stocking rate would allot nearly 50% of the forage to private livestock. You cannot be putting that much forage in the belly of cattle without seriously impacting the ability of these public lands to support wildlife like elk, bighorn sheep, and deer.

The mere presence of cattle socially displaces native species like elk, forcing them to utilize a habitat that may be less suitable. How is the FS going to prevent the social displacement of elk, deer, and other wildlife?

What is the impact of restocking vacant allotments on other economic values like wildlife, water quality, recreation, and ecosystem integrity.

Ask the FS why it is putting the interests of private businesses ahead of the welfare of public wildlife? 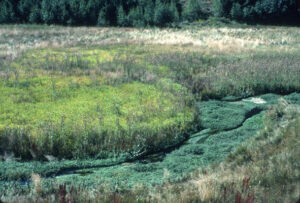 Ungrazed stream on the Humboldt Toyaibe NF has an intact stream channel, vegetative cover to the streambank. Cattle naturally gravitate to these “riparian areas” trampling banks, removing vegetation cover, polluting water, much to the detriment of riparian-dependent wildlife from amphibians to trout. Photo George Wuerthner

As in most of Nevada, permanent water and springs are in short supply. Often the bulk of all forage in Nevada allotments is located along the green strip of vegetation along streams and in wet meadows. Cattle naturally gravitate to water and degrade “riparian” areas by consuming the vegetation, compacting soil, polluting water, and breaking down channels and banks. The only way to preclude this is to fence these streams. But one can question why the public should have to pay tax dollars to fence streams to protect its property from private businesses.

Furthermore, the FS proposes developing springs and seeps critical to many other wildlife, from native snails to amphibians like frogs. Removing water from these natural water sources to give water to cattle harms these wildlife species.

Some of these allotments are in sage grouse habitat. Livestock grazing, particularly of springs, wet meadows, and other moist habitats, removes forbs (flowers) critical to young sage grouse chicks. Plus, livestock grazing removes the hiding cover that grouse need to protect themselves from predators.

Grazing, particularly in wilderness areas but throughout the region, will impact recreational use—nothing worse than trying to camp where cow pies are scattered about the ground. 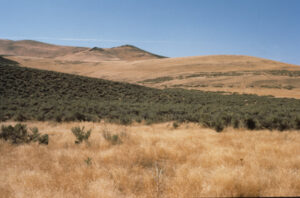 The dense grass cover in the foreground is the highly flammable annual cheatgrass which is wiping out sagebrush ecosystems. Cheatgrass spread is facilitated by livestock grazing. Photo George Wuerthner

Livestock is a major source of GHG emissions. The FS should justify how it can help meet the federal government’s goal of reducing GHG while allowing domestic livestock to graze on public lands.

While the Forest Service is under no obligation to make a profit, it doesn’t have to lose money. Given the low grazing fees that are charged for grazing public lands, the high costs of management, including the cost of monitoring, maintaining range infrastructure (like fences, etc.), and the “ecological” costs associated with grazing, such as the damage to watersheds, vegetation, wildlife, and recreation, the FS should provide a complete cost accounting of all fees and benefits. This economic analysis should include the administrative costs of doing an EA, the cost of office space, trucks, gasoline, hydrologists, biologists, botanists, soil scientists, archeologists, and any other specialists associated with the grazing allotments implementation and planning.

One should evaluate permanent allotment retirement in any EA or other environmental evaluation.

Please send in scoping comments and ask to be sent a copy of the EA when available. Again comments can be submitted https://cara.ecosystem-management.org/Public//CommentInput?Project=59389