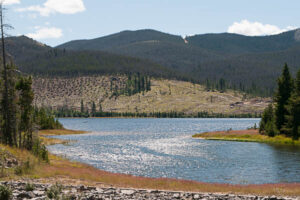 In a recent editorial in the Helena IR, an employee of RY Timber presented misleading commentary in his essay “Forest Service is Right to Restore Forest Health” that deserves a response.

First, keep in mind that the timber industry and forestry profession (both dependents on logging for their employment) have conveniently defined forest health. 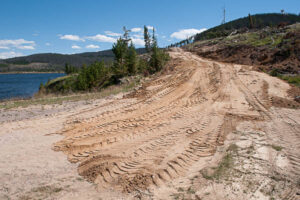 However, ecologists have found bark beetles are a keystone species that creates many ecological opportunities for plants and animals.  The snag forests resulting from either beetles or wildfire have the second-highest biodiversity after old-growth forests.

A healthy forest ecosystem has an abundance of dead trees. But the timber industry, due to its economic bias, can’t see the forest (ecosystem) through the trees. 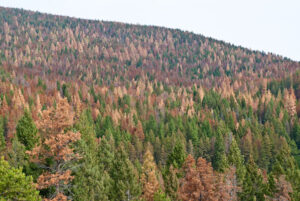 According to the misleading comments from the timber industry beetle kill increases fires. By this logic this hillside of beetle kill trees on McDonald Pass by Helena should have burned by now. Photo George Wuerthner

Another misleading statement is the idea that beetle-kill forests are more likely to burn. If that were true given the recent beetle outbreak around Helena a few years ago, there would be no forests left in the area.

Contrary to the fear mongering from the timber industry researchers have found that once the needles fall off a tree, it is less likely to burn. What burns in a wildfire are the fine fuels, not the larger boles, which is why you get snags.

Indeed, green forests are more likely to burn due to the abundance of needles, cones, and small branches on trees and the flammable resins they contain. An inconvenient truth that the timber industry plays down is that most of all wildfires occur in green forests. 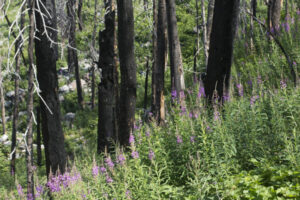 The snag forests that are created by bark beetles and wildfire have some of the highest biodiversity of all ecosystems in the West. Photo George Wuerthner

Dead trees also store carbon, while logging and processing of wood products emit carbon immediately contributing to the climate warming favoring wildfire spread. For example, in Oregon, 35% of the CO2 emissions in the state come from the timber industry, more than all the cars, trucks, and airplanes in the state.

The idea that logging can reduce fire spread is also duplicitous. What is driving wildfire as well as beetle outbreaks is climate warming. Under the ongoing drought, high temperatures, low humidity, and windy conditions, ignition wildfires are impossible to control.

In a letter to Congress a few years ago, more than 250 scientists unaffiliated with the timber industry or the Forest Service wrote: “Thinning is most often proposed to reduce fire risk and lower fire intensity…However, as the climate changes, most of our fires will occur during extreme fire weather (high winds and temperatures, low humidity, low vegetation moisture). These fires, like the ones burning in the West this summer, will affect large landscapes, regardless of thinning, and, in some cases, burn hundreds or thousands of acres in just a few days.” 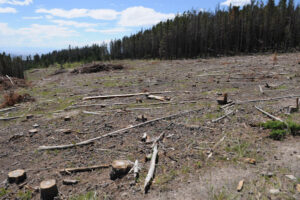 Nor is logging benign as the scientists went on to note: “Thinning large trees, including overstory trees in a stand, can increase the rate of fire spread by opening up the forest to increased wind velocity, damage soils, introduce invasive species that increase flammable understory vegetation, and impact wildlife habitat.”

A quote attributed to Sinclair Lewis: “It is difficult to get a man to understand something when his job depends on his not understanding.” That quote applies equally to the timber industry and many who work for the Forest Service.