Strong evidence that aspen groves are becoming healthier with presence of wolves.

Healthier aspen groves support more bird species, which may in turn help the overall health of forests. One thing mentioned in the article is that the pine beetle infestations seen throughout the west could be impacted with greater diversity and larger populations of birds. This has been well documented in Yellowstone Park, but it is interesting to see it happening in other wolf range too.

Discussion about wolves often focuses on how wolves impact elk populations and behavior and how that affects hunting.  Should wildlife management agencies focus solely on this or should they focus on the ecological benefits of wolves as well?  One could argue that the focus on wolf management is too narrow and that people should look beyond their narrow interests and look at systems as a whole.

Here is another question to ponder.  Can these benefits be realized on public lands impacted by heavy livestock grazing? 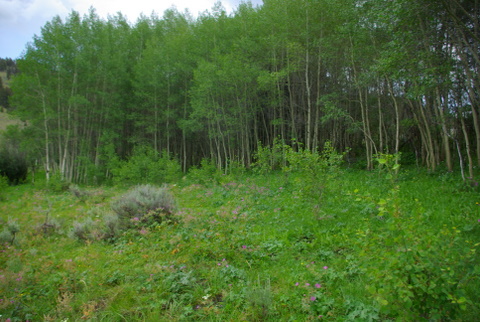 Most wolf occupied country, however, shows such a great impact from cattle, it is probably hard to sort out indirect effects of wolves on the vegetation. Cattle eat from half to 90% of the forage on most grazing allotments, leaving little for the elk, deer, pronghorn. As a result, the effect of changed elk behavior due to the wolves will probably be hard to document.