Do you have some interesting wildlife news? March 3, 2013 edition More about “encroaching” junipers on Juniper Mountain.

The Owyhee BLM has finally issued a Proposed Decision on the so-called “Group 1” allotments but, unfortunately, the BLM really doesn’t go far enough to reverse damage caused by decades of abusive livestock grazing and they didn’t collect enough information to rationalize their decision even though the Environmental Assessment (EA) consists of a whopping 556 pages including appendices and maps.

The Group 1 allotments, Castlehead-Lambert, Garat, Swisher Springs, and Swisher FFR are in very southwest Idaho and consist of approximately 261,507 acres of federal and state lands. The allotments are important habitat for imperiled species such as greater sage-grouse, Columbia spotted frog, pygmy rabbit, and Columbia River redband trout. There are several streams, springs, and riparian areas that are critical habitat for many species and, unfortunately, they are severely degraded. Upland sagebrush steppe areas, those areas not directly associated with water, are heavily degraded and some areas have been drastically altered due to past actions taken by the BLM. Large areas of the Garat allotment have been bladed and planted with nonnative crested wheatgrass making them inhospitable to sage grouse and pygmy rabbit which depend on healthy stands of sagebrush with a healthy understory of native bunchgrasses and forbs. The wet meadow and riparian areas of the Garat allotment so critical for spring brood rearing of sage grouse chicks have been pock marked with hummocks that dry out the meadow soils and vegetation leaving them with little habitat value. 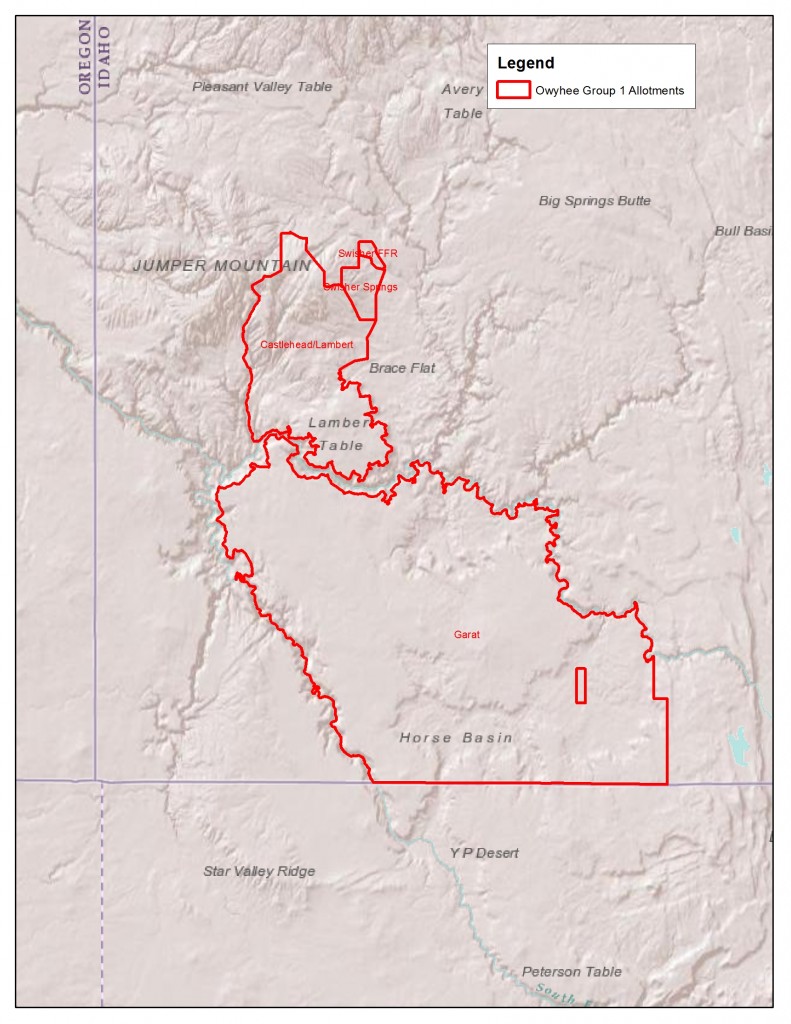 The juniper forests on Juniper Mountain, where the Castlehead-Lambert, Swisher Springs, and Swisher FFR allotments are, hold rugged canyons in which Columbia River redband trout somehow manage to persist despite extreme degradation to the riparian vegetation and soils. Schools of these small trout barely exist in series of disconnected puddles that are no deeper than 15 inches and only 2 feet wide by 5 feet long. Above and below these puddles are long, dry stretches of severely beaten stream banks with depauperate vegetation and bare soils. These streams reek of cow manure and the adjacent springs are trampled, muddy wallows. Contrast these conditions to the small exclosures that were built to provide very modest protection to just a few springs at the headwaters of select streams. Within the few exclosures that haven’t been breached by cattle over the course of the year, there is very lush and diverse aged vegetation that consists of aspen, willows, rose, and tall riparian grasses. Outside of these exclosures, and within exclosures that have been breached by cattle, edible vegetation has been eaten down to the ground, water tables have dropped, and soils exposed to erosion downstream to choke out what remains of the Columbia River redband trout habitat. Frankly, it’s a disgrace. 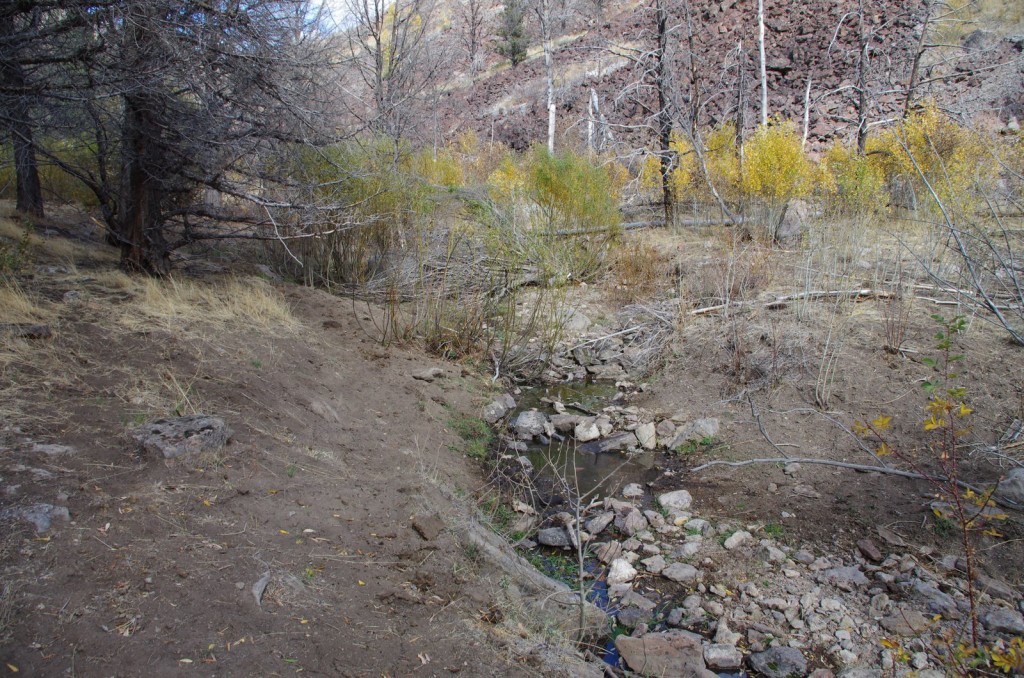 Rather than provide real solutions to these problems the BLM has papered over them. While the BLM does reduce grazing on these severely depleted landscapes with their proposed decision, they didn’t go far enough.  Rather than send staff out to the landscape long enough to really understand the landscape and document the problems that are evident even to the casual observer, the BLM chose to spend most of its time in the office and let the process by clouded by dubious range science.  There are huge errors in the Environmental Assessment that gloss over the impacts of livestock grazing.

For example, take a look at this map of Juniper Mountain ecological sites. Ecological Site Indices are maps of soils and moisture created by the Natural Resources Conservation Service (NRCS), and the BLM uses them as a baseline for what to expect with regard to vegetation. This map shows that no junipers are to be expected despite the fact that they are here today and were there 100 years ago. In fact, the BLM says “Ecological site descriptions for Castlehead-Lambert allotment do not identify the presence of juniper in reference site descriptions, although juniper has the potential to invade sites totaling 77 percent of the acreage.” This claim is clearly bogus but it is used to claim that junipers are to blame for problems that livestock grazing has caused and as a rationale to eradicate junipers. 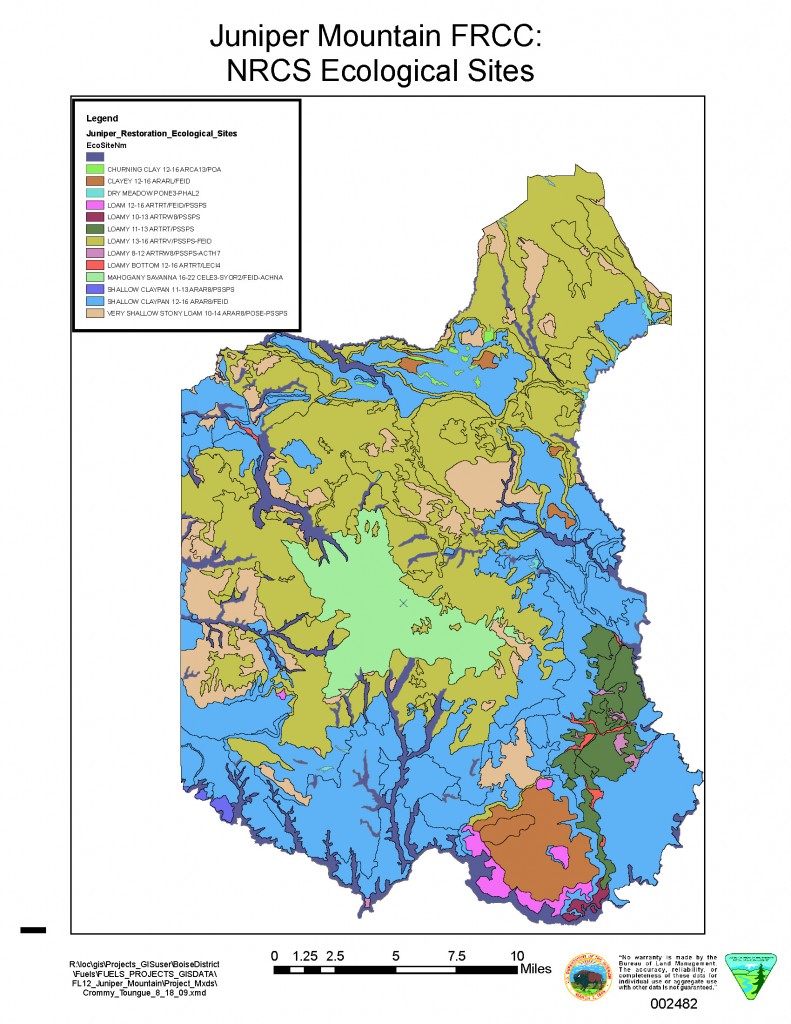 While investigating the claim that junipers don’t belong on Juniper Mountain, I was asked to look at the original public lands surveys found on General Land Office Records site and found surveys for this landscape from 1914 and 1921.  While the surveys don’t quantify junipers or show their density they do document their presence and in the General Description notes at the end of each survey the surveyors noted “thick juniper” and “scattered juniper” in every township.  When doing the surveys the surveyor walked the lines between each and every section (a square mile) to mark section corners and quarters.  At the end of each section line they noted the type of timber.  To map this I read the notes for each and every section line and noted the documentation of juniper.  I was able to give each section a score of 0 to 4.  If all four section lines noted “timber: juniper” then the section was given a score of 4.  What I found was that nearly every section had juniper presence just as they do today.  The surveys also mention “good growth of bunch grass which affords excellent range” even though today the understory is composed of very sparse grass and a nonnative semi annual grass called Poa bulbosa that is a very poor range plant with little habitat value.  Small islands of these healthy bunch grasses can be seen in areas that can’t be reached by cattle and the contrast is quite startling. 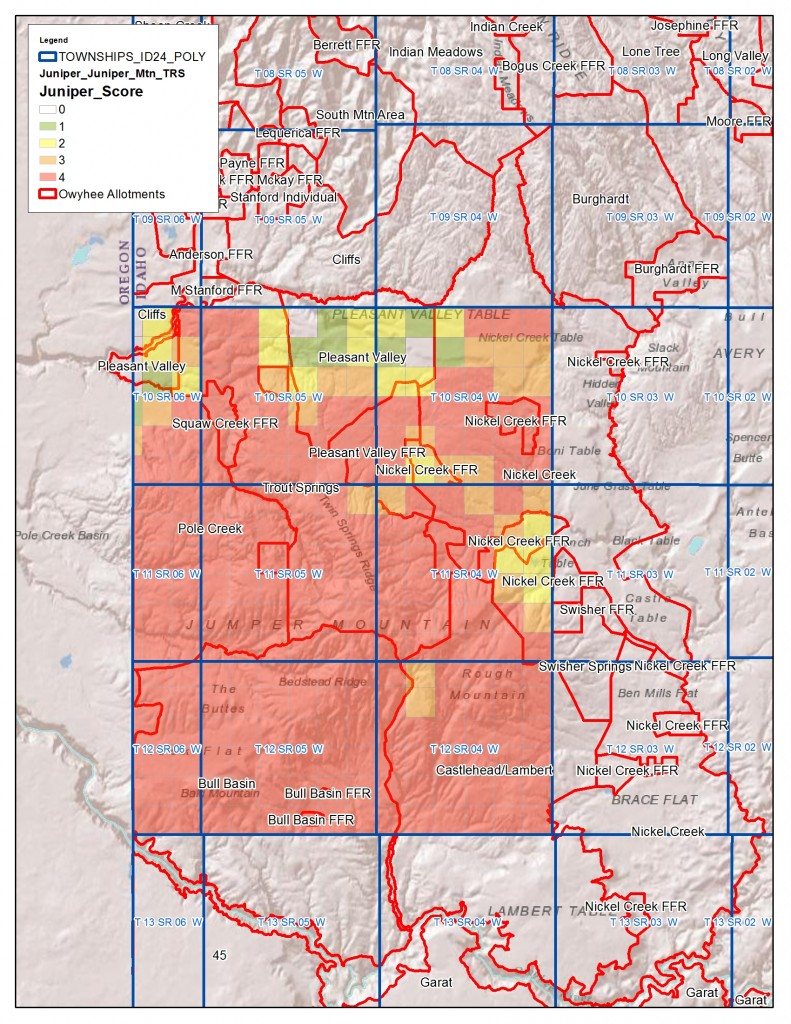 It appears that the NRCS and BLM have conspired to make it appear that there should be no junipers on Juniper Mountain and it appears that is due to ranchers’ longstanding contempt for woody vegetation.  One of the range conservationists went so far as to say that Juniper Mountain was called “Grassy Mountain”. With over a century of grazing in this landscape, the healthy grass understory that existed at the time of the surveys have disappeared and, as long as there is grazing, will not come back.   The motivation to increase livestock forage so that profits are higher for ranchers is a powerful incentive and the NRCS and BLM have a long history of favoring anything that might benefit ranching.

Based on this bogus claim, the BLM has determined that areas with junipers are not meeting rangeland health standards while the areas that have burned in recent fires and have moderate forage for cattle are meeting standards.  They claim that the junipers are the reason that the grasses have disappeared and that they are encroaching onto sagebrush steppe sites making them unsuitable for sage grouse and other sagebrush obligates.  In another process the BLM has proposed to remove junipers from Juniper Mountain so the allotment will start to “make significant progress” toward meeting the standards for rangeland health and so that the landscape will become sage grouse habitat despite the fact that it has never been sage grouse habitat. In addition to this landscape not ever being sage grouse habitat, the areas that burned in the 2007 fire are becoming covered with ceanothus not sage brush.  It’s a classic diversion.  They blame trees for problems caused by cattle and hope that the removal of the trees will increase forage and sage grouse habitat.

Another example of the inadequacy of the information collected by the BLM is the fact that BLM totally ignores the condition of some of the springs in the Garat allotment. They claim that the Water Resources and Riparian/Wetland Areas standard has been met despite glaring evidence that Piute Creek is a total mess and other springs have been beaten to pulp. 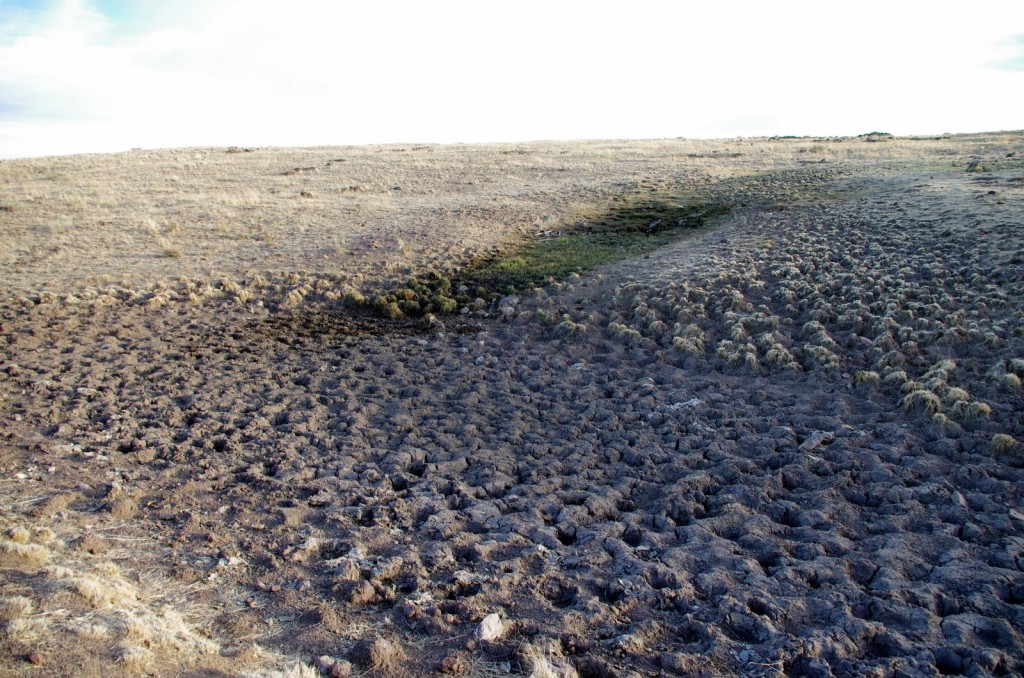 Garat – the only upland springs in a quarter million acres 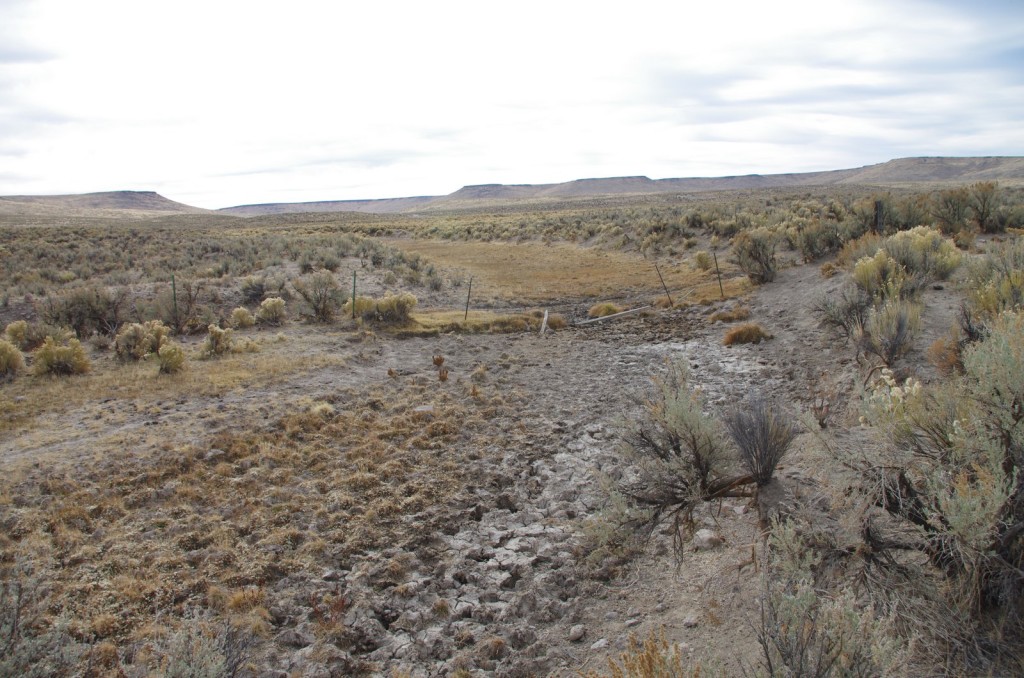 Despite this, the BLM ignored several alternatives that would have addressed many of the problems that have been identified on the allotments.  Alternatives such as rehabilitation of crested wheatgrass seedings to native sagebrush steppe vegetation to enhance sage grouse and pygmy rabbit habitat were dismissed out of hand.  Alternatives where stocking levels are based on standards for streambank alterations due to trampling were dismissed even though these standards have been shown to be exceeded annually on a nearby allotment with similar problems.  The BLM ignored alternatives which strive to maintain the recommended 7″-9″ stubble heights for perennial grasses so that there is adequate nesting and brood rearing cover for sage grouse. The BLM also refused to implement restrictions on grazing during timeframes that are important for sage grouse breeding, nesting, and brood rearing, (March 1 – June 20) or timeframes that are important for maintaining residual perennial grasses that have stopped growing for the year into the following spring (August 1 – Novewmber 15).

So, while stories are written that focus on the impacts that the ranchers might be facing and exaggerate the economic impact that ranchers have on the economy, we show you here what the landscapes actually look like.  These landscapes need a rest from livestock grazing and the BLM knows it but fails to take full measures because of political meddling.

Below is a slideshow of photos taken by Katie Fite, Western Watersheds during the 2010 and 2012 grazing seasons.  As you will see, the degradation is severe and, unfortunately, will continue with the proposed decision.