When the Science Doesn’t Validate Your Position, Cherry Pick Your Own

The war for the public’s mind
In the war against our wildlife and habitat, there are other sub wars (tactics) taking place; such as the media and the manipulated science wars. It has long been recognized that he who controls the media, controls the minds, opinions and votes of the masses. As the internet exploded, providing the public with other avenues for news and information, such as independent news sites, blogs, and issue driven websites, science began to be more readily available to the public. Academic papers are in demand, quotes and statistics are routinely posted on forums and in emails, statistics graphically edited into images and postcards. No longer can the corporate owned mainstream media easily control the sheeple minds as they did decades ago.

This same principle is enveloping our science communities, as science is being wielded in the media and policy arenas like light sabers in Star Wars. The running cynical comment is that you can buy/produce the science you need to validate any position.

As a result, you can’t accept an academic paper at face value. It has become necessary to closely critique the science to make sure it is on the up and up. Looking at the conservation sciences, for example, independent and peer review panels have become necessary to evaluate reports that determine policy, such as delisting wolves – a very polarized subject in the western states. 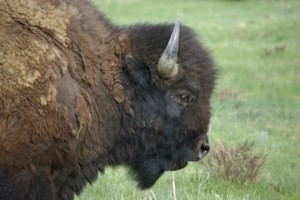 Brucellosis
My favorite battle of late has become the controversial disease brucellosis, specifically the bacteria Brucella abortus, whose preferred hosts are the cattle, elk and bison. Brucellosis, originally spread to the Greater Yellowstone Area by livestock, became naturalized in the elk and bison populations; which continue to grow and acquire immunity. If exposed, an elk or bison’s blood can test positive for brucellosis antibodies, representing natural and acquired immunity from exposure to the disease, yet not be currently infected/infectious. There is no test, at this time, which differentiates between natural and acquired immunity and infection/infectious, without killing the animal.

Brucellosis science when it suits you
I have witnessed a scientist that co-authored peer reviewed academic papers, defend Montana cattle as not being in danger from wild Greater Yellowstone Area bison, excluding them from the brucellosis threat testimony altogether, citing elk as being the risk, a small one at that. One of the co-authored papers, A Risk Analysis of Brucella abortus Transmission Among Bison, Elk and Cattle in the Northern Greater Yellowstone Area, states the risk of transmission from bison is 0.0% – 0.3% (the 0.3% being an academic safety net). No documented case of Brucella abortus transmission from wild bison to cattle has ever naturally occurred, even when cattle were run next to wild bison for over thirty years in Jackson Hole, Wyoming. Ranchers from Jackson Hole went so far, in 1997, as to officially protest to Pres. Clinton, Sectaries Glickman and Babbitt, as well as WY Gov. Gerringer stating, “We ask you to understand that the ranches of this area view the possibility of brucellosis transmission from wildlife to cattle to be so insignificant that it poses no real threat to their interests. Nor does the conservation community view brucellosis as a threat to wildlife populations. We ask you to understand that the real threat to our interests are the proposals originating from and/or driven by APHIS and the unfounded premise that brucellosis poses a real threat to man and beast. ”

In addition, the science of genetics states, “Our results indicate that elk and cattle isolates are virtually identical genetically, differing by only one to two mutational steps. On the contrary, bison B. abortus differed from cattle and elk by 12-20 mutational steps.” – DNA Genotyping Suggests that Recent Brucellosis Outbreaks in the Greater Yellowstone Area Originated from Elk, 2009. Brucella abortus genetics are a factor in transmission, not the political assumption that one bovine species (bison), had to be the vector to another bovine species (cattle), instead of a cervid (elk).

The same Risk Analysis paper states that that the risk to cattle, from elk, is 99.7 – 100%. Furthermore, this same scientist, MT Dept. of Livestock’s Dr. Marty Zaluski, publicly defended Montana cattle in Texas, concerning the small elk transmission by stating, “The chance that any one Montana animal (context was domestic cattle) is brucellosis positive is 0.00024%.” He produced additional science to defend the concern of possible latent heifer syndrome (a negative serum test result could later pop positive). “And in fact, in the comments I’ve included, the USDA has submitted, a letter, an email from the Western Region, Associate Director, that went through to his local epi’s (epidemiologists) in Fort Collins, as well as in the Greater Yellowstone Area and they gave me a letter that said the risk of latent heifers is not significant, and not certainly, doesn’t warrant additional regulations.”

Wild bison are not the Typhoid Marys the ag/livestock interests and corporate owned media repeatedly portrays them as, with a scarlet B attached to their breast.

In Montana, concerning wild bison and elk, these scientific facts are never quoted by Montana’s Department of Livestock or livestock interests. Rather the politicized and polarized fear mongering statements are promoted. Since 2008, these special interests now know it is the elk genotype that has been the source of some of the cattle infections (others are cattle isolates and cattle vaccine blooms in all 3 GYA states); as a result, that lethal machinery has been turning its sights to our wild elk populations with the same lethal brucellosis eradication goals they have employed with the bison, yet not releasing their choke hold over the wild Yellowstone National Park bison.

Where’s The Science Petition
This lack of scientific management of brucellosis in elk and bison of the Greater Yellowstone Area prompted a Petition for the National Academy of Sciences to conduct a scientific review of Wildlife Brucellosis in the Greater Yellowstone Area. The last review was conducted in 1998, with major scientific advancements occurring after that time, which could greatly aid in directing policy from the special interest political realm, into scientific wildlife management.

The American Public are owed nothing less, in the stewardship, policies and management of our public trust resources, on behalf of this generation and future generations, than the knowledge and ethical principles of peer-reviewed science. We need petition signatures to advance the principle of scientific wildlife management in the federal and state policy arena, circumventing the controlled mainstream media campaign against our wild bison and elk.

On the immediate Montana front
Recently, in response to my and others, public demands for ethical, responsible science to be utilized concerning wild bison conservation in Montana, as well as trying to deceptively lay the political foundation for the up coming April MT Fish, Wildlife & Parks Bison Working Group meeting in Lewistown, MT, an academic paper’s pre-publication abstract was promoted by the media nation wide, originating in Billings, Montana. “A government-funded experiment on diseased bison herds in Yellowstone National Park shows non-infected animals can be safely removed and used to start new herds, researchers from the U.S. Department of Agriculture and a wildlife group said Thursday.” This clearly makes it sound like science, right?

The study: Feasibility of quarantine procedures for bison (Bison bison) calves from Yellowstone National Park for conservation of brucellosis-free bison, is primarily produced and funded by USDA APHIS, the main special interest with the brucellosis eradication goals of eliminating the naturalized livestock disease from all our wildlife in the Greater Yellowstone Area by various means. Some of their objectives include capture, test and slaughter; cattle vaccination and sterilization of the wildlife.

The study begins by explaining the outdated InterAgency Bison Management Plan that forced agencies together with diametrically opposed mission statements – hence no wild bison allowed into Montana, even after nearly 15 years of this obstructed process. The study states the IBMP actions include, “…maintain a viable, free-ranging population of bison in YNP.” The IBMP actually states, “The management of bison under this plan will include actions to protect private property; actions to reduce the risk of transmission of brucellosis from bison to cattle; and, actions to maintain a viable, free-ranging population of Yellowstone bison. ” Big difference in those prepositions. The study is trying to affect the bison conservation of the Yellowstone National Park herds; the IBMP’s is in context to YNP bison that migrate into Montana.

Cherry picked, tailor made science
This quarantine feasibility study proposes the capture of bison calves (about 10 months of age) from the adult herd, putting them through repeated blood testings to remove all that test positive for antibodies to Brucella abortus, slaughtering the positives, vaccinating the negatives with the cattle vaccine RB51 at 18 months of age (tagging them, giving boosters later), and quarantining them on small acre parcels for 3 years.

1. The Yellowstone National Park bison are not livestock, they are wild, free-ranging bison. 2. The USDA APHIS agenda seeks to impose livestock management methods on these wild animals. 3. Slaughtering all wild bison that simply have positive antibody reactors, is removing the naturally evolving and acquired immunities from the wild bison population, interfering with the genetics of the species. 4. Removing calves from their herd, for this abominable quarantine process, will remove the social learned herd dynamics from this wild species – essentially, livestock domestication of wildlife. 5. Vaccination of wild bison, the science of which has stated does not prevent infection; is disputed; single shot vaccine showed no difference with non-vaccinated; commitment to booster vaccinations and long term programs would be necessary, at great cost and manpower hours with limited results; Bison vaccination, in an attempt to lower seroprevalence, will have no effect on reducing seroprevalence in the elk population currently the transmission risk vector to the cattle; efficacy of RB51 vaccine has not been tested in field conditions; and test and slaughter/vaccine programs are not efficient or socially acceptable management tools for wildlife.

This quarantine study concludes with, “This study provided data that reinforce the testing protocol framework in the USDA APHIS brucellosis eradication uniform methods and rules. The ability to obtain brucellosis-free bison from exposed populations now gives herd managers, whose previous population control options were primarily limited to slaughter, an outlet to remove live bison from their herds. In the future, any entity, whether private, tribal, academic, or governmental with the intention of operating a facility to obtain brucellosis-free bison can use the methodology used in this study as a foundation to create a testing regimen applicable to their source population.” Of course it reinforced their protocols, it was designed to.

This isn’t ethical, responsible science (remember the 0.0% – 0.3%?); it is cherry picking science to, “reinforce the testing protocol framework in the USDA APHIS brucellosis eradication uniform methods and rules.” This is a blatant effort to impose USDA APHIS’ eradication of brucellosis in wildlife agenda; deceiving the public that they need such draconian methods if they are ever going to have a free-ranging wild bison population in Montana. Except, by the time USDA APHIS and Mt DOL gets through with them, they won’t be wild bison anymore, they will be USDA APHIS approved cattle!

I don’t want to know where the beef is.

I want to know where the wild bison and real science in our wildlife management is!

11 Responses to When the Science Doesn’t Validate Your Position, Cherry Pick Your Own