Grazing Fees Still a Sweetheart Deal for Private Industry, Agencies Abashed at Having to Raise It Bundy Gang Won For Now

By Barrie Gilbert On February 3, 2016 · 43 Comments · In Grazing and Livestock, Public Lands

Casual readers of news coverage of the recent armed takeover of the Malheur National Wildlife Refuge might reasonably assume that the Refuge is strictly protected from livestock grazing. After all, that’s one of the things the vigilantes were protesting, right? The big, bad federal government locked up the lands from grazing and they were there to take it back?

Sadly, that yarn is far from the truth.

In fact, much of the wildlife refuge is grazed by private cattle, and even “hayed” for livestock feed, despite these activities’ dubious legality and harmful impacts on wildlife.

The Refuge is Grazed and Hayed

According to a recent High Country News article, grazing was first allowed decades ago to placate local ranchers:

During the Depression years of the 1930s, the federal government paid the Swift Corp. $675,000 for ruined grazing lands. Impoverished homesteaders who had squatted on refuge lands eventually received payments substantial enough to set them up as cattle ranchers nearby.

John Scharff, Malheur’s manager from 1935 to 1971, sought to transform local suspicion into acceptance by allowing local ranchers to graze cattle on the refuge.

Dr. Steve Herman, Emeritus Member of the Faculty and long-time ornithology instructor at The Evergreen State College, first visited the Refuge in 1966 and has been studying birds on the Refuge and taking students there ever since. He shared these recent images of cattle grazing and haying on the Refuge.

The Refuge was opened to increased cattle grazing in 2012 to accommodate cattle displaced by wildfires.

In addition to the authorized grazing, he reports that cattle regularly trespass into unauthorized areas—even the lawn of the Headquarters, which was littered with cowpies as recently as early August of 2015. 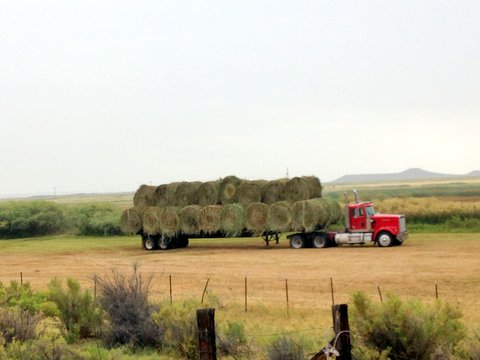 Hay bales about to be trucked off the Refuge. Photo: Dr. Steve Herman.

How Should Refuges be Managed?

The mission of the National Wildlife Refuge System is to “administer a national network of lands and waters for the conservation, management, and where appropriate, restoration of the fish, wildlife, and plant resources and their habitats within the United States for the benefit of present and future generations of Americans.” 16 U.S.C. § 668dd(a)(2).

In administering the System, the Secretary shall “ensure that the biological integrity, diversity, and environmental health of the System are maintained for the benefit of present and future generations of Americans.” Id. § (a)(4)(B).

To that end, the U.S. Fish and Wildlife Service may only permit other activities on a refuge when it “determines that such uses are compatible with the major purposes for which such areas were established.” Id. § (d)(1)(A). In addition, regulations provide that “private economic use of the natural resources” of a refuge can only occur if the use “contributes to the achievement of the national wildlife refuge purposes or the National Wildlife Refuge System mission.” 50 C.F.R. § 29.1.

In Malheur’s case, Teddy Roosevelt’s original 1908 declaration establishing the Refuge provided that it was “set aside for the use of the Department of Agriculture as a preserve and breeding-ground for native birds.”

A 1935 order confirmed it was “a refuge and breeding ground for migratory birds and other wildlife.” Exec. Order. No. 7106.

Several articles have painted the 2013 management plan governing the Malheur National Wildlife Refuge, known as a Comprehensive Conservation Plan, as a triumph of collaboration.

That’s one way of putting it.

Another is that the plan made deep compromises on allowing the continuation of grazing and haying on the Refuge to appease local ranchers, at the expense of the ecological integrity of the Refuge.

In 2009, the Refuge began a process of updating its CCP. It did so utilizing a collaborative process. The collaborative group included several ranchers, who proved very effective at advancing their interests.

The result was that the final 2013 plan allows for the continuation of extensive grazing and haying on the refuge. The plan states that its “tools” to manage wetlands and terrestrial habitats include “traditional late summer haying,” “autumn/winter rake-bunch grazing,” “highly prescriptive warm-season (growing season) grazing,” mowing, and farming.

In particular, the plan allows grazing on thousands of acres of wet meadows. 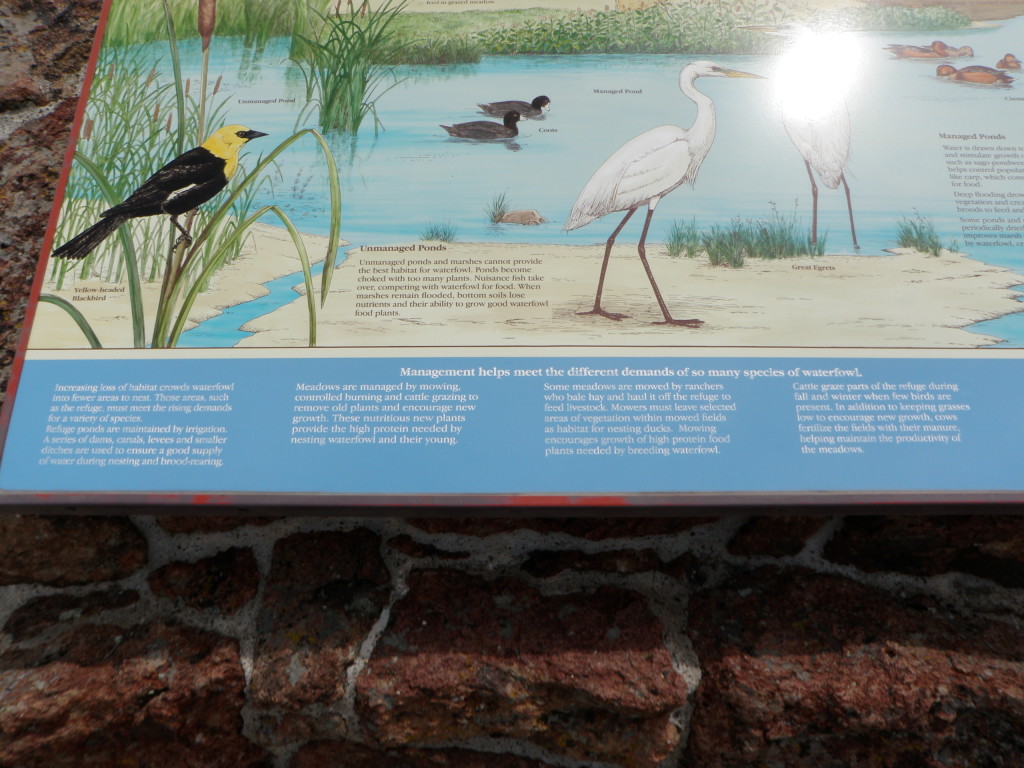 What About the Refuge’s Wildlife-Centric Mandate?

In order to justify these activities as “compatible” with the purpose of the Refuge and the Refuge system mandate—to protect birds and wildlife—the U.S. Fish and Wildlife Service was forced to do somersaults and concoct quasi-scientific reasons to justify allowing grazing—an activity that everywhere else is well-known to cause severe damage to riparian and avian habitats.

The plan’s “compatability determination” for grazing and haying asserts that the primary reason for “treating” wet meadows with grazing is to “improve foraging conditions” for birds. It claims that grazing “treatments” “provide short-stubble habitat, which allows early warming of soil and water and early availability of new green sprouts and invertebrates for birds to eat in the spring.” It explains that, “[t]heoretically, treated meadow sites receive more solar radiation, resulting in early warming of soils and earlier availability of important invertebrates for food.” CCP Appendix B.

In other words, when a wet meadow has been denuded of vegetation by cows, the sun will warm up the ground earlier in the season and allow birds to eat invertebrates sooner. The early bird gets the worm in the grazed field!

The problem is that the plan provides scant evidence or justification for this theory. Its main citation in support is an unpublished and non-peer-reviewed prior Malheur management plan.

The compatability determination doesn’t discuss whether a lack of early-spring forage is actually a limiting factor for important or rare birds on the Refuge. It doesn’t explain why birds that have been migrating to Malheur for thousands of years now need human manipulation to make their habitat suitable.

Nor does it convincingly balance the “theoretically” warmer fields against the real harm to birds that grazing and haying causes due to loss of habitat complexity, loss of hiding cover, and an increased vulnerability to predators.

In this video, Dr. Herman explains that grazing on the Refuge causes harms including crushing eggs and removing cover that birds such as cranes need to protect their young from predators.

In other words, according to scientists like Dr. Herman, livestock and haying operations on the wildlife refuge are not compatible with the purposes of the Refuge—to serve as a preserve and refuge for birds.

Time for a New Era

In a piece this week, WildEarth Guardians’ Erik Molvar noted that in the wake of the takeover placing increased attention on the fiscally and environmentally disastrous consequences of public lands livestock grazing, a new mandate has emerged for public lands protection.

Here’s hoping that this mandate will lead to a new era of wildlife-centric management on the Malheur National Wildlife Refuge itself—one that does away with the incompatible uses of grazing and haying on the Refuge.

Pursuant to BLM’s multiple-use mandate, BLM lands surrounding the Refuge, and across the West, are grazed. Surely we can remove livestock from that small fraction of public lands in the West governed by U.S. Fish and Wildlife Service under a wildlife-centric mandate.

Because Malheur really is for the birds.