Landscape Amnesia And The Deschutes River

By George Wuerthner On May 2, 2020 · 5 Comments · In Endangered Species Act, Grazing and Livestock, Oregon, Politics, Water 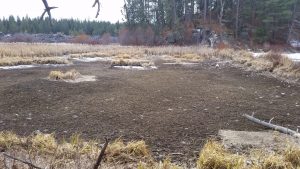 I took a run along the Deschutes River in Bend’s Riverbend Park the other day. The one thing I noticed is that the river is nearly opaque. You can see down maybe 2 feet, but no more. Why? Because the river was being flooded by water releases from an upstream reservoir to serve downstream irrigated ranches and farms. These high flows erode the banks, filling the river with sediment.

All this is perfectly legal, of course. It’s not against the law for irrigators to kill fish,  destroy river ecosystems,  degrade the beauty of our publicly owned waterways or even extirpate endangered species like the Oregon spotted frog.

I imagine that most people walking along the river think it is beautiful. Still, if you know anything about the original condition of the river, you see a degraded river ecosystem.

As the ecologist, Aldo Leopold once quipped, “One of the penalties of an ecological education is that one lives alone in a world of wounds. Much of the damage inflicted on land is quite invisible to laymen.”

Most Bend residents have no point of reference due to landscape amnesia. In other words, they have no idea of how beautifully clear and fluid the Upper Deschutes once was, so we accept the present condition as the way it has always been.

This contrasts significantly with the historical condition of the river, which a report on the Irrigation Development in Oregon’s Upper Deschutes River Basin 1871-1957 says:  “The Deschutes River has more nearly uniform flow than any other river its size in the United States.” In 1905 the US Geological Survey stated that the Deschutes River varied no more than 8-10” in height throughout the year and had stable flows around 700 cfs.

Today the river can vary from as little as 100 cfs in winter to over 2000 cfs in the summer.

Such radical changes in flow have led to the deterioration of the Deschutes River from one of the most translucent streams in the West to its current degraded condition is due to one industry—agricultural irrigation.

Every year the irrigation districts turn the Upper Deschutes River into an extension of their irrigation system, alternatively tuning up flows way beyond historic conditions or turning off the water entirely, so the river practically dries up. These policies significantly degrade the river ecosystem.

If you want to know what the Deschutes looked like in the past, look at the Metolius River or the Fall River. Both spring-fed streams still have the same even year-round flow of cold clear water that the once characterized the Deschutes.

Not only has irrigation degraded the beauty of the river, but it is killing native wildlife. The Oregon spotted frog, bull trout, and other species dependent on the river ecosystem are all nearly extinct or in steep decline. Further downstream steelhead, chinook, and sockeye salmon are decreasing in numbers as well, primarily due to water quality issues.

These fish and wildlife are the proverbial “carney in the coal mine,” telling us that current abuse of the river is harming our collective natural heritage.

Currently,  a Habitat Conservation Plan (HCP) is being prepared that will permit the irrigation districts to continue the destruction of our river ecosystem. The US Fish and Wildlife Service believes that at least 600 cfs is needed for a healthy river for frogs but recommends the irrigators be allowed 22 years to get there—if they get there at all. The irrigators love this delay because if they are lucky, the Oregon spotted frog will be completely extinct in the Upper Deschutes River, and end of the story.

Of course, this is the way all HCP seems to work. I’ve seen previous plans all allow the continued extinction of the species they are designed to protect.

I was involved in efforts to list the Montana grayling as an endangered species since 1991. As with the fish in the Deschutes, the primary cause for decline of the graying is lack of water due to irrigation. The FWS agreed with me that the fish was endangered, but because of political pressure from ranchers, various “conservation plans” were permitted to substitute for listing and more strident restrictions on water use.

In Montana, the “so-called” conservation groups like Trout Unlimited, The Nature Conservancy, and others all opposed listing of the grayling and advocated “working collaboratively” with the ranchers.

All along, the graying has continued to decline to the point where there is only one adult grayling per mile of the river—making the grayling functionally extinct. The ranchers and their Stockholm symptom collaborators have almost won.

The same “collaborative” approach is occurring on the Deschutes with all the groups involved in the river’s future advocating for protecting “family farms” as if just because a ranch or farm is owned by a family, it doesn’t do any ecological harm.

In fact, as in most of the West whether a family farm or not,  the primary use of irrigation in the Deschutes River Basin is for hay and irrigated pasture. What irrigation water is not used for livestock feed, is used to grow things like carrot seeds and seed potatoes. Extraordinarily little is used to grow food consumed locally as implied by many collaborative supporters.

Note that Oregon water law allows the irrigators the “right” to use water for “beneficial use,” not ownership of the water. The public owns the water. Worse, the irrigators take this water and use the river as an extension of their irrigation system without any compensation to the people who own this resource—us.

One of the “solutions” to the current degradation of the river proposed by irrigators is for taxpayers to pony up funds to improve irrigation water delivery, so there is less loss to leakage and evaporation from the irrigation projects. The total cost of this proposal is estimated to be a billion dollars.

Of course, the irrigators want the rest of us (taxpayers) to subsidize the structural improvements to their irrigation systems, thereby enhancing the value of their private property, while at the same maintaining access to the public’s water.

Unfortunately, as in most of the West, the state has failed to perform its public trust obligation. Supporters of the collaborative approach believe that politically it would be impossible to get the state to do its public trust duties, so they wind up siding with the irrigators and supporting a vast taxpayer subsidy in the hope that it will improve water quality in the river sufficiently to preclude the extinction of the Oregon spotted frog and other river dependent species.

Of course, all of this depends on a hope and a prayer because it is by no means certain that irrigation improvements will be fully funded, that there will be a real reduction in water use (due to paper cfs. which means some water is allotted but has never been utilized, so could be given up without any real water being returned to the river), that the changes in river flows will actually be sufficient to reverse the decline of endangered species. Too little too late may be the problem.

Not to mention that the plan does not address climate change, which could significantly reduce or change the water flows and availability in the river. So whatever ever might potentially work today might not be sufficient in 30-40 years.

Even if one believed that growing irrigated hay and other livestock forage was a good use of scarce water in the desert, it seems reasonable to start charging for the use of this water. I am confident if irrigators had to pay Oregon citizens for the use of their water, many inefficient ranching and farming operations would cease, and indirectly we would have more water in the river and less pollution.

Alternatively, if we taxpayers are going to spend a billion dollars, might not a more effective solution be to use that money to buy up farms/ranches outright and restore the water to the river, much as livestock grazing permits buyouts have been used to reduce grazing impacts. This would also reduce water pollution from manure, fertilizers, pesticides, and sediment that currently winds up in the river from Ag production.

The question I have for all of the residents of Oregon is why we permit one industry to destroy our waterways for their personal profit. Would we allow any other industry to dump chemicals into the water or pollute the common airshed that we all depend upon?

The real problem is our collective landscape amnesia allows us to accept environmental destruction and our unwillingness to challenge the ecological degradation of our land and water resulting from agriculture.

A free-flowing, clear, and ecologically functioning river is part of our collective natural heritage if we only have the willingness to put the river first in all policy issues, rather than second to private Ag interests.

5 Responses to Landscape Amnesia And The Deschutes River