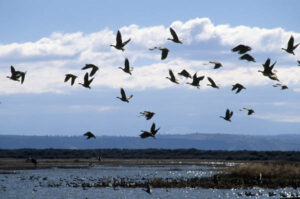 The Clear Lake National Wildlife Refuge (NWR) is likely not on everyone’s radar. The refuge lies on the California-Oregon border to the southwest of Klamath Falls, Oregon. Part of the Klamath Basin National Refuge system, Clear Lake, is one of many natural lakes in the area that are important staging areas for migratory waterfowl on the Pacific flyway.

The refuge uplands are clothed in native bunchgrasses and sagebrush, though the exotic cheatgrass and medusahead are also present.

The Clear Lake NWR also serves other wildlife species, including the endangered sage grouse and several native fish. Many refuges around the West are compromised by on-going livestock grazing and agricultural production. As such, the Clear Lake Refuge situation is emblematic of a much larger problem of allowing commercial interest to compromise our wildlife refuge system.

At the Clear Lake NWR, livestock grazing harms sage grouse and two endangered native suckers, the Lost River and shortnose suckers. Despite this harm, the refuge has authorized spring, summer, and fall grazing in the sanctuary.

Western Watersheds Project, Center for Biodiversity, and Portland Audubon Society have all filed legal opposition to the refuge’s livestock grazing decisions. They allege, among other things, that the refuge failed to consider as an alternative discontinuing or reducing grazing on the refuge; failed to consider how spring grazing would impact sage grouse, failed to look more broadly at how grazing on the adjacent Modoc National Forest was also impacting sage grouse; as well as impacts of grazing both within the refuge and on adjacent Modoc National Forest were affecting the suckers.

The environmental groups argue that the Clear Lake NWR violated the National Environmental Policy Act when it concluded that livestock grazing was “compatible” with the purposes for which the refuge was established to enhance and protect native wildlife. The Clear Lake NWR assertion begs credulity that livestock grazing will “heal” uplands to help recover sage grouse.

In essence, the Clear Lake NWR is arguing that more grazing will benefit wildlife on the refuge.

In its recent decision to expand grazing on the Clear Lake NWR, the agency has approved spring grazing in the only remaining lek and spring nesting habitat in the refuge, even though protecting obligate sagebrush species like sage grouse is one of its primary conservation goals.

It is now well established that forbs (flowers) and the insects they attract are a critical source of food for sage grouse chicks. Once again, grazing, particularly spring grazing, harms this important sage grouse food source.

Sage grouse chicks spend the first month to six weeks of their lives primarily in riparian areas and wet meadows where insects are abundant, and hiding cover is dense. These are the same areas that livestock routinely tramples and overgraze, reducing their suitability for sage grouse brood rearing.

Livestock is also a major contributing factor in the spread of the annual exotic cheatgrass, which is highly flammable and is responsible for fires that reduce overall sagebrush distribution across the West.

Clear Lake NWR uses the discredited idea that “targeted grazing” can be used to eliminate cheatgrass. Targeted grazing often leads to more intensive grazing of native perennial grasses to their detriment and compacts soils, and destroys biocrusts, promoting the spread of cheatgrass. To the degree that “targeted” grazing might work on a small scale, it is not suitable for broader landscapes.

Although fences are not found on the refuge, on the adjacent Modoc National Forest, which is part of the sage grouse habitat, fences constructed for livestock production, are a significant threat to adult birds due to collisions. In some places, mortality from fence collisions has been as high as 29% of the adult birds. Fences also act as survey posts for avian predators of sage grouse. 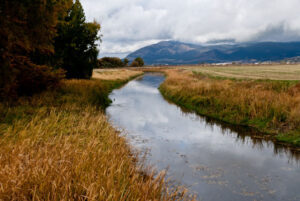 Grazing of riparian areas by cattle, particularly on the adjacent Modoc National Forest, damages the critical stream spawning habitat causing more significant sedimentation, loss of vegetative cover exposing fish to greater predation, and bank destabilization. Sedimentation due to this instability and trampling impacts is one cause of turbidity in Clear Lake, limiting the emergence of shallow water vegetation. This vegetation is important as a habitat for young suckers.

LACK OF FULL RANGE OF ALTERNATIVES

The refuge never considered whether complete removal of livestock might better serve the refuge’s goals and wildlife. This is particularly egregious since complete removal of livestock from the nearby Hart Mountain NWR in Oregon has demonstrated numerous positive outcomes for riparian areas, sage grouse, and native grasslands. One only has to look at Hart Mountain to see that livestock removal has the potential to enhance the very values for which Clear Lake NWR was created to protect.

Adding to this credibility issue, Clear Lake NWR maintains that it cannot require that livestock grazed on adjacent Modoc National Forest lands that move on to the refuge to be kept out of the refuge arguing it would violate California’s “Open Range” rules, which suggests that any landowner not wanting livestock on their property must fence out the cows.

However, the Clear Lake NWR could declare that livestock are not permitted to drift on to the refuge, and the Forest Service could order the ranchers using the Forest Service allotment to use riders to keep cattle from violating this trespass. Obviously, the federal government is loath to put any additional obligations on the ranchers, even if it would protect public resources.

What the situation at Clear Lake NWR demonstrates once again is the reluctance of federal agencies to do a full accounting of the multiple impacts of livestock production on native wildlife and the willingness to use any justification to preserve commercial use of our public lands for the benefit of private businesses.