Another dead Mexican wolf in Arizona; Can we release adults now? 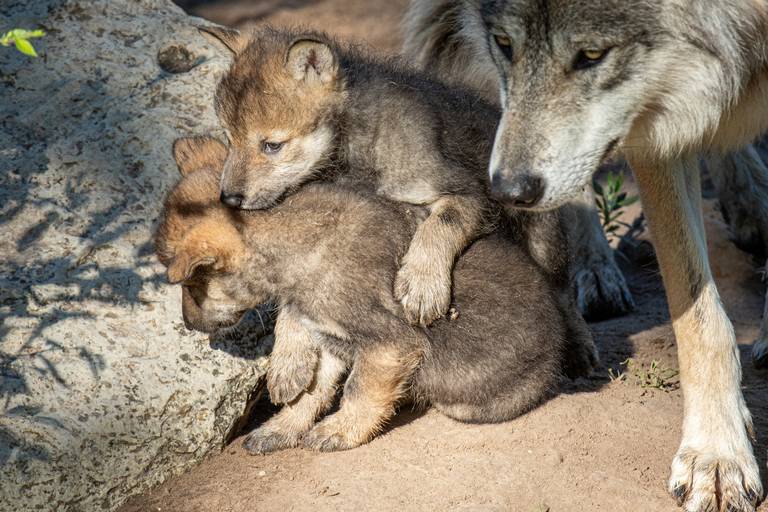 Pups from the same captive litter as these two from Kansas were cross-fostered by the wild Hoodoo pack in Arizona. LOU ALEXANDER SEDGWICK COUNTY ZOO

You might not have seen the U.S. Fish and Wildlife Service news release this week that announced the illegal killing of another Mexican wolf in Arizona. Authorities are looking for information on “a vehicle that was stopped or driving slowly near the Saffel Canyon Trailhead on the evening of February 18, 2021,” or anything else that someone, somewhere, might know about the killing.

Every illegal killing is a theft from all of us, but this wolf’s story adds insult to injury. She was a young female, number 1887, cross-fostered into the Hoodoo Pack in Arizona just last spring. Cross-fostering is the only way that Arizona Game and Fish Department is allowing new wolves to be released in Arizona right now, and it’s a critically important tool for improving the genetic diversity of the struggling population. Cross-fostering is tricky business, requiring wild dens to welcome captive-born pups as their own and raise them up in the wild. Hoodoo 1887 was one who had apparently made it through the crucial first year.

Look, we’ve been saying this for a while, but the death of Hoodoo 1887 before she was able to breed underscores the point: relying on cross-fostering alone isn’t going to save this species. We need well-bonded adult and family pack releases into the wild, and we need them yesterday.

If the Biden Administration and Secretary Deb Haaland want to save Mexican wolves from their second wild extinction, they need to step around the obstinate state wildlife agencies that are blocking anything but cross-fostered pups in Arizona and New Mexico. Cross-fostering is too little, too late for the recovery of this species, especially if ding-dongs with rifles keep taking out a significant percentage of the wolves each year.

In the meantime, spread the word about the reward of $37K for information about this suspicious death. Someone’s gotta want that money.

Edited to add: AND the Fish and Wildlife Service MUST stop removing cross-foster wolves for livestock-caused conflict, like, ahem, at problem ranches.

9 Responses to Another dead Mexican wolf in Arizona; Can we release adults now?