Antidote For Rural Sprawl–Land Use Zoning 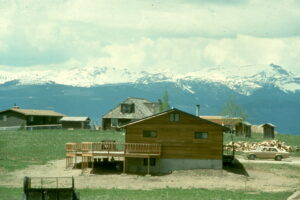 Back when I was a student at the University of Montana in Missoula, I had a girlfriend who managed to rent a house adjacent to the Bitterroot Mountains near Hamilton. All of us were very jealous of her luck in obtaining a place to live so close to wildlands. But I soon began to doubt how lucky she was.

Like most people living in places like the Bitterroot Valley, she was still connected to Missoula. In her case, she was a student like me.  So, every morning, she had to get in her car and spend almost an hour driving to the University to attend classes. And, of course, spend another hour back home each evening. By contrast, the apartment I was living in was five minutes by bike from campus. I could roll out of bed and be in a classroom in five minutes. 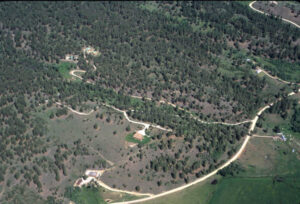 I began to sour on her choice of residency when it came time to do more than sit on the front porch of her abode looking out at the forest. Because she spent so much time driving back and forth, when the weekend came, she had to do all the chores and activities that she could not do during the week, from cleaning the house, washing clothes to buying groceries. The added cost of gasoline and car repairs took a toll too. She had less money to spend on things like going to listen to a concert or go to a movie.

Meanwhile, because I lived in town and so close to the campus, I could put a load of laundry in the wash, go to class and come back and get them out or I might stop off at a store on my bike back home and get some food.

I could walk or ride my bike to almost everything I used in a week, whether it was sending off some mail at the post office, picking some cash at the bank, or going to the hardware store to pick up some tools. And it was easier to drop by a friend’s house to see if they were home and had time to socialize.

Because I could easily take care of all these mundane tasks in my typical week, I had time to go hiking, skiing, or even enjoy music someplace on a Saturday night.

Ever since that experience, I have always lived in town. I soon realized that living in town, as long as I was dependent on the city for work, social interactions and supplies made more sense.

I found the same ideas applied even when I had a “regular” job. Living in town had many advantages when you spend less time driving.

Since that time, every house I’ve ever owned was in town. But since my youth, I’ve come to appreciate another reason for living in town—it reduces rural sprawl. Sprawl costs society more to support—providing services from medical, education, roads, and power all costs more when spread over large areas. 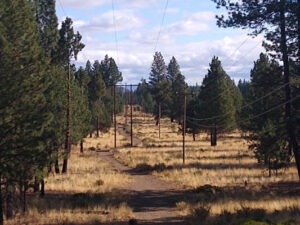 Powerlines to service rural sprawl increase fire hazards since high winds often knock down trees on lines starting fires. Many of the most destructive fires in the West like the Camp Fire that burned Paradise, California to the ground, were started by power lines. Photo George Wuerthner 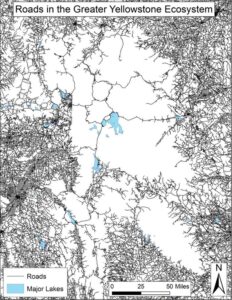 Roads in the Greater Yellowstone Ecosystem.

HOW CAN WE PREVENT RURAL SPRAWL?

Numerous tools collectively can influence development. Oregon provides a reasonable model. When I attended grad school at the University of Oregon, I was fearful of moving from a small town in Montana to the “big city” of Eugene. However, I discovered that Eugene was very livable. There is an abundance of parks, bike trails, and even fishing for trout or even salmon right in the center of town. 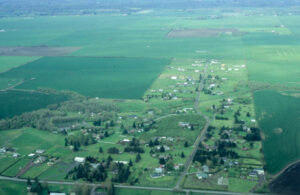 Due to land-use zoning one can see abrupt borders to communities in Oregon’s Willamette Valley where 70% of the state’s residents live.  Photo George Wuerthner

When I would occasionally fly into Eugene, looking down on the landscape as I approached Eugene, the town’s border and rural areas were abrupt and sharp. At night if flying from Portland, you would look down on the Willamette Valley, which is home to 70% of Oregon’s population, and see primarily dark spaces.

How could this be? The answer is zoning. In the 1970s, when population growth and development in Oregon took off, then-Governor Tom McCall, a Republican, managed to get the Republican-dominated legislature to pass statewide zoning. It is important to note that these regulations were passed when Oregon was still largely dependent on resource extraction like logging, mining, and agriculture.  In other words, it was not the work of liberals who invaded from California.

The rules are not perfect. There are many examples where communities and counties have attempted to circumvent the law. Nevertheless, compared to the alternative free for all that dominates land use in the rest of the West, Oregon’s land-use regulations are surprisingly effective. 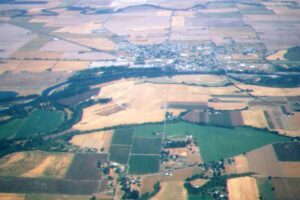 Harrisburg, Oregon in the top center of the photo is less than 20 miles from Eugene, the second-largest urban area in the state, still retains its rural surroundings due to urban growth boundaries. Photo George Wuerthner

The entire state is zoned with urban growth boundaries. Even the smallest communities must create an urban land-use plan.  All new housing and associated structures must occur in these areas. The local community creates these development zones to accommodate projected new development. Because the districts are required to think about where housing tracts will occur, they can also plan for the traffic that may soon be driving the roads, where new schools and parks are needed, or where industrial centers are appropriate. They can even address issues of affordable housing.

The idea that zoning drives up housing costs is not accurate. Housing costs in Bozeman, Missoula, Boise, Salt Lake City, Denver, and other major urban areas is as high or higher than in Oregon cities like Portland or Eugene.

In rural areas, lands are designated either prime farm or forest lands. On these lands, little development is permitted, though it is possible to build a few structures for your hired help, kids, or grandmother. 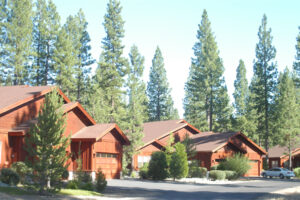 There is much value in such a system. For once, the leapfrog subdivisions that are so common across western valleys are precluded. Because farmland cannot be subdivided, farmers can afford to buy their neighbor’s property because the only value is its agricultural production value, not it’s potential for future subdivision. 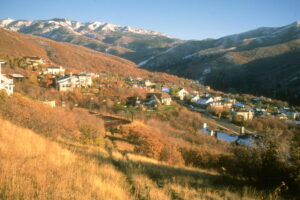 Subdivision on the Wasatch Front near Salt Lake City, Utah. Such homes are very vulnerable to wildland fires. Much of the rising cost of fire suppression is due to the spread of development into the urban fringe. Photo George Wuerthner

Land-use zoning also prevents new structures in the wildlands urban interface which is driving up the rising cost of fire suppression.

There are other ways to achieve similar results. In the Pine Barrens of New Jersey, subdivisions’ development is precluded by the transfer of development rights to urban areas. In other words, a developer is given the land of equal value within a metropolitan area to keep sprawl out of the Barrens and help to focus development in cities. 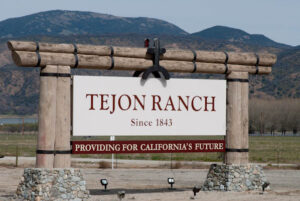 Land used for agriculture cannot compete against subdivision value. Without strong zoning laws, even the highest-priced Ag lands in places like California can be developed. Photo George Wuerthner

Many opponents of zoning argue that supporting (and not criticizing the impacts from rural land uses like livestock grazing) will preclude development. If this were the case, there would be no subdivisions in most of the West.  Even California which has the highest value Ag land in the nation cannot preclude subdivisions. The problem is that once land prices rise above what Ag production can produce, it is frequently sold for a “higher value” land use like housing.

There will always be people who will argue that zoning is an infringement upon their freedom to build a home where they choose. Speed limits and traffic lights are an infringement of our freedom to drive at any speed we want, but society recognizes that we would have chaos without such limits. The same principles apply to land use. 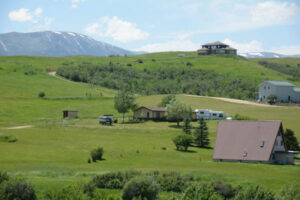 Most of us recognize that zoning has value. Who doesn’t believe keeping structures out of a river’s flood plain or keeping a pig farm out of a residential neighborhood isn’t reasonable? We need to extend that idea to the entire landscape, or we will lose much of what we consider valuable. 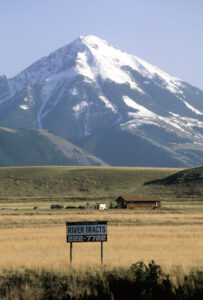 But perhaps the essential aspect of this land-use planning is that it maintains wildlife habitat and migration corridors. Increasingly, there is a realization that without planning, we may close future opportunities for wildlife to move or adapt, especially in an age of climate change.

In my view, planning and zoning are how we share the earth. Most of the critters living on this planet have no one advocating for their well-being. Zoning and planning is one way to show you care about more than your self-interest.

6 Responses to Antidote For Rural Sprawl–Land Use Zoning