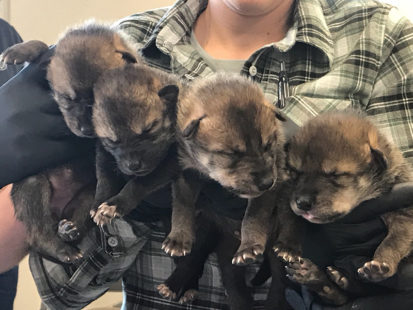 Pups being moved into wild dens. Photo via: https://www.endangeredwolfcenter.org/blog/four-ewc-wolf-pups-make-cross-fostering-history/

The Catron County fearmongers are at it again, complaining to the State Land Commissioner of New Mexico that the U.S. Fish and Wildlife Service’s cross-fostering of wolf pups somehow puts residents at risk and, “jeopardizes the lives” of New Mexicans.

Representative Yvette Herrell cried wolf to New Mexico State Land Commissioner in early May, 2020 with a letter that discusses the state’s having granted permission to the U.S. Fish and Wildlife Service to conduct cross-fostering on state lands. The letter states, “These activities are occurring less than two miles away from the home of several of my constituents who have expressed to me their extreme alarm and fear for the safety of their family and livestock.”

Seems like someone is not clear on the concept of cross-fostering. It entails moving 10- to 14- day old wolf pups from captivity into established wild dens with litters of their own. The wild wolves have already denned at the site, independently. Depending on the litter size, a number of the wild puppies might be removed from the same den where the captive-bred babies are inserted to ensure that the overall pack size isn’t too great to risk its survival, which really amounts to no new wolves. And in any case, the cross-fostered pups are still teeny, tiny  and really shouldn’t be cause for “extreme alarm.” It’s almost like someone just felt like making a stink about nothing, because the introduction of  a few baby wolves onto state land is not a threat to anyone.

The wolf puppies will hardly dress up like Grandma and lay abed in ambush for unsuspecting grandchildren. The ranchers need to stop wearing out the fairy tales.

And don’t forget that the threats to livestock that certain Catron County ranches reported from state-land denning wolves last year turned out to be very questionable. The depredation reports – like a number of them in New Mexico – are inconclusive (at best).

Rep. Herrell pivots from complaining about the dire threat of wolf puppies to complaining that U.S. Fish and Wildlife Service wasn’t charged a fee for this Natural Resource Authorization (NRA), begging the question if Rep. Herrell has any idea what pathetically low fees that ranchers pay to graze on state lands? Or, for that matter, federal lands?

New Mexico State Land Commissioner Stephanie Garcia Richard did the right thing by cooperating with U.S. Fish and Wildlife Service and ensuring that the cross-fostering efforts wouldn’t be hindered by political stupidity. Western Watersheds Project stands with the majority of the American public in welcoming the return of Mexican wolves to public lands, and in celebrating the return of lost biodiversity.