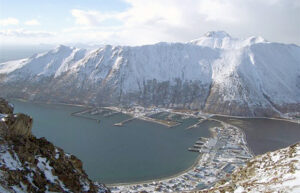 Recently Secretary of Interior Deb Haaland visited the isolated  Aleut community of King Cove on the Alaskan Peninsula southwest of Anchorage, Alaska, to see and hear firsthand whether to approve the construction of a road across the Izembek Wilderness and National Wildlife Refuge. Recently, a federal court approved a Trump Administration land exchange proposal to facilitate the road right of way through the refuge. 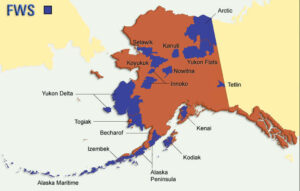 The Izembek Refuge is one of the blue areas is on the Alaskan Peninsula which connects the Aleutian Islands to the main part of Alaska.

The debate about a road pits Alaskan Aleuts against the legal mandate of the Wilderness Act to preserve wildlands and protect wildlife. The 315,000-acre Izembek Wildlife Refuge is a critical stopping ground for migratory waterfowl. Its eel grass lagoons are considered of International Importance.

The road would connect the King Cove community to an all-weather airstrip (built during WW11) 37 miles away in Cold Bay, Alaska. The airport was initially operated as a military base before being transferred to the state of Alaska. 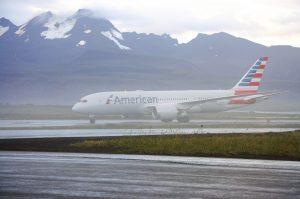 The 10,000 foot airstrip in Cold Bay was built by the Army and can easily service jets. Photo American Airlines

Currently, access to the Cold Bay airport is either by air from a strip in King Cove or by boat.

Roads are prohibited in wilderness areas. The Izembek Refuge Wilderness was designated in 1980 as part of the expansive Alaska National Interest Lands Conservation Act (ANILCA).

Henry Mack, the major of King Cove, Stanley Mack, the mayor of Aleutian East Borough, and Della Trumble, a member of the King Cove Corporation and Agdaagux Tribal Council, suggests in an editorial Anchorage Times, opponents put wildlife ahead of humans.

As they wrote in a commentary about opposition to the road by former Secretary of Interior Bruce Babbitt and former Fish and Wildlife Service Director Jamie Clark, “It’s easy for highly paid former federal officials like Bruce Babbitt and Jamie Clark to pretend that the lives of nearly 1,000 indigenous Aleuts in King Cove, Alaska don’t really matter.” 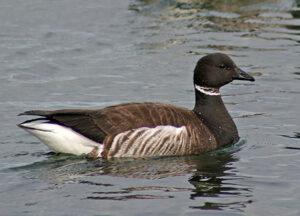 Some 98 percent of all black brant spend part of the year feeding among the eelgrass lagoons of the Izembek NWR.

Izembek is particularly important for Pacific Black Brant; 98 percent of those small geese spend part of the year there, feeding on the world’s most extensive eelgrass beds, their dietary staple. The area also supports about half the world’s Emperor Geese and a substantial percentage of the threatened Steller’s Eider population. The refuge supports one of the denset population of grizzly bears on the Alaskan Peninsula, as well as wolves, foxes, caribou, and even walruses.

The U.S. Fish and Wildlife Service concluded that allowing a road through the refuge would “degrade irreplaceable ecological resources.” It also would jeopardize the global survival of a migratory sea goose, called the Pacific black brant, and the emperor goose and other waterfowl. 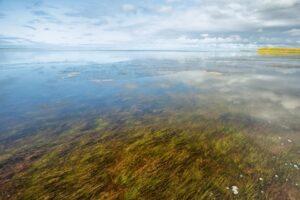 Izembek is recognized as a Wetland of International Importance, and Izembek lagoons are also considered an Important Bird Area (IBA) of global significance.

A 2013 Record of Decision on a Final EIS that reviewed the potential impact of the road concluded: ” Construction of a road through the Izembek NWR wouild lead to significant degradation of irreplaceable ecological resources.”

The document went on to note that the proposed land trade between the Aleuts and federal government would compromise the ecological integrity of the refuge. “The Service has determined that increased acreage would not compensate for the overall values of the existing Izemeck Refuge lands and Wilderness that would be removed. Nor would the offered lands compenstate for the anticipated impacts that the proposed road would have on wildlife and the habitat that surround the road corridor.”

Jewell found ” Increased human traffic and noise, changed hydrology of the wetlands, pollution runoff, and introduced contaminants and invasive species would despoil the isthmus.”  She further concluded there were other modes of transportation available to address emergency medical transportation and pledged to work to implement them.

The King Cove villagers contend they need the proposed road for “medical emergencies.” Although King Cove has an airport, planes and helicopters cannot operate in extreme weather, which frequently closes the King Cove facilities. The Cold Bay airport can operate in more inclement weather. A road connecting the two communities would also permit villagers to fly more frequently to Anchorage and other destinations for shopping and other purposes. 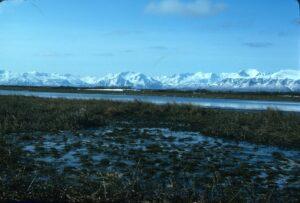 The mountains along the Alaskan Peninsula in an unusually good weather day. Photo George Wuerthner

I have some sympathy for the situation of the villagers. I have experienced the horrific weather typical to the Aleutian Islands and Alaskan Peninsula. I was once trapped for days without food other than the fish I caught while camped at Ugashik Lake because aircraft could not fly to pick me up.  Other times I was delayed for days by bad weather while trying to fly out of the villages of Port Moller and Meshik. I’ve been out numerous times on trips to the Alaskan Peninsula in the rain with 50 mile per hour winds, so I know how difficult the weather can be at times.

Villagers have latched on to the idea that a road would provide safe passage between King Cove and Cold Bay. However, a doctor who oversaw medical evacuations in King Cove for 15 years said traveling almost 40 miles on the gravel road during 60 mph winds and blinding snowstorms would be “suicidal” for patients and rescue teams.

“Should the road happen, I foresee all sorts of calamity,” said Dr. Peter Mjos, who was the Eastern Aleutian Tribes’ medical director until 2002. He retired from practicing medicine in 2015.

But twenty years later, the justification was changed to the medical emergency rationale. 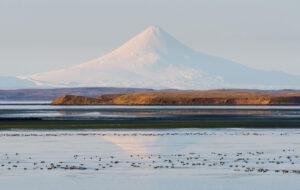 To find an alternative to the road, the federal government contributed $37 million (a taxpayer subsidy of over $56,000 per King Cove resident) for an improved medical clinic in King Cove and the purchase of a hovercraft and improved dock facilities that could link both communities by water. The hovercraft only operated for three years before the Borough shut it down, arguing it was too expensive to operate and failed to work in high winds. However, during the three years it operated, the hovercraft successfully transported 22 medical evacuations.

In addition,  of the original $37 million allotted by Congress for the hovercraft purchase and operation, villagers chose to spend $26 million to construct part of the road they hope will eventually link the two communities. In other words, they spent $26 million on a road to nowhere which could have paid  hovercraft and other alternative transportation like Coast Guard transport for many years.

Community leaders admitted they used part of the federal grant to construct a partial road because they believed it would make it harder for the federal government to deny its completion.

However, some suggest the real purpose of the road is related to money. The Peter Pan Processing plant in King Cove is Alaska’s biggest salmon and seafood processing operation. The route would make getting workers in and out of King Cove easier.  But it would also reduces costs for shipping fish. Currently, Peter Pan must load fish on a boat, transport it by sea to Cold Bay, where it is loaded on another truck to be transported to the airstrip.

The transport of fresh fish to markets is another justification for the road. However, the land exchange approved by the Trump Administration has specific language that precludes large companies like Peter Pan from using the road to transport fish.

The agreement says explicitly: “The road shall be used primarily for health, safety and quality of life purposes (including access to and from the Cod Bay Airport) and generally for non-commercial purposes. The commercial transport of fish and seafood products, except by an individual or small business on any portion of the road shall be prohibited.”

The term “generally”and “small business” opens a big loophole. Not surprisingly, the local Aleut leaders of King Cove all support road construction. Since they own fishing boats, including in 2019, the mayor of King Cove and five out of six city council members, all considered small business owners, would not be prohibited from using the road to transport fish.

It is important to note that the US Small Business Administration defines a firm engaged in “seafood product preparation and packaging” to be a small business if it has no more than 750 employees. Though Peter Pan is owned by a fortunte 500 Maruha Nichiro Corporation in Japan. The Peter Pan currently operates with 500 employees. So all Maruha would have to do is spin off as a separate company, and it would qualify as a “small business.”

Another important issue is that such an exemption to Wilderness Act prohibition against roads could easily become a precedent for new roads in other parts of Alaska where many villages are not part of any road network. In this instance, apparently, the Izembek Refuge is not part of the traditional “sacred” lands of the Aleut.

Many villages in Alaska have no road access to year-round air service. People choose to live in these places. While I might support the road if I thought there were no other viable alternatives, as former Secretary of Interior Sally Jewell concluded, viable (if not expensive) alternatives do exist including emergency transport from the U.S. Coast Guard. It seems to me that “medical emergencies” is a red herring. While there may indeed be a few times when alternative means of transport are not available, I do not believe this is the real reason for the road. The main motive is to create economically viable alternatives for seafood transport. This is about advancing economic desires rather than satisfying the “needs” of King Cove residents.

Many Alaskan communities face the same limitations on transportation due to weather, terrain and other constraints. People choose to live in these places. While the Indigneous Aleuts living at King Cove have other alternatives, the Indigenious wildlife that depends on the Izembek Refuge lands do not.

Secretary of Interior Haaland has stated she wants to represent the interests of Indigenous people. It will be interesting to see whether she agrees with the conclusion of former Secretary of Interior Sally Jewell that other options exist to meet the desires of King Cove residents while protecting globally significant wildlife and wilderness values.

7 Responses to Izembek Refuge and Wilderness Threatened by Road