The Challis (Idaho) wild horse herd is the largest in Idaho, occasionally growing to 400 or so animals. It maintains very distinct boundaries — on its north the Salmon River, on the south Road Creek, on the east U.S. Highway 93, and on the west the East Fork Salmon Road.

Every 2-3 years the U.S. Bureau of Land Management (BLM) thins the herd which consists of a number of stallion-led bands of 5 to 15 horses. It was thinned in 2010 and current numbers are about 160. This time the mares were released with a contraceptive injection that lasts a couple years, so presently the foals are few to none.

One or two bands use part of the Greenfire Preserve near the mouth of the East Fork of the Salmon as a portion of their range. Visitors can usually see the horses in the near distance all day long, because they keep just to the east of the East Fork of the Salmon River. During our recent visit to the preserve (no it is not a preserve for horses) we decided to take a walk through past and up a small canyon into the colorful Challis volcanic cliffs just to their east. This is our story.

We spent Friday through Tuesday May 2011 at the Greenfire Preserve on the East Fork of the Salmon River in Idaho.

The most remarkable event of the weekend is that we were chased by wild horses, six of them. It was scarey as the devil since we were on foot in the middle of an open meadow with nowhere to hide and, of course, nowhere to run. The stallion was furious with us, just furious, and kept snorting and grumbling and showing his teeth.

I have to write about this since I cannot contain myself about this extraordinary event. I am so glad not to have been trampled to death or disfigurement.

We were just out hiking and went up Horse Canyon. The band of wild horses was in two groups, one in the upper meadow, the other in the lower meadow. As we came back down the canyon the big gray mare with a blaze on her face in the upper meadow was approaching us. She did not look friendly or curious. Her head was down like she meant trouble. We stopped and yelled at her and threw rocks. This brought the stallion racing over from the band in the lower meadow. He sidelined us as he got within about 100-150 feet and was positioning himself to bite and kick us.

There was one point when it looked like the stallion was going to attack. Ralph and I bunched up together and held our arms and hiking sticks and big rocks up to make ourselves look big. This seemed to make him change his mind about taking us on. Then he went back to gather up the rest of his mares. For a long time, well 30 seconds, they galloped straight at us and it seemed as if he had formed a posse to come after us. We were way too far from the river bridge or any kind of protection to try to make a run for it. Instead, we had to keep walking like we were not scared and hope they would decide a fight was not needed. Then they began to curve a bit towards the base of the mountain and sidelined gradually away from us.

I don’t think I’ve ever come this close to being hurt by a wild animal in all our years of outdoors stuff. I’ve been scared of grizzlies plenty of times but never directly challenged. It’s interesting how very fast these horses changed from “landscape art” to a threat. It is not something I expected at all. 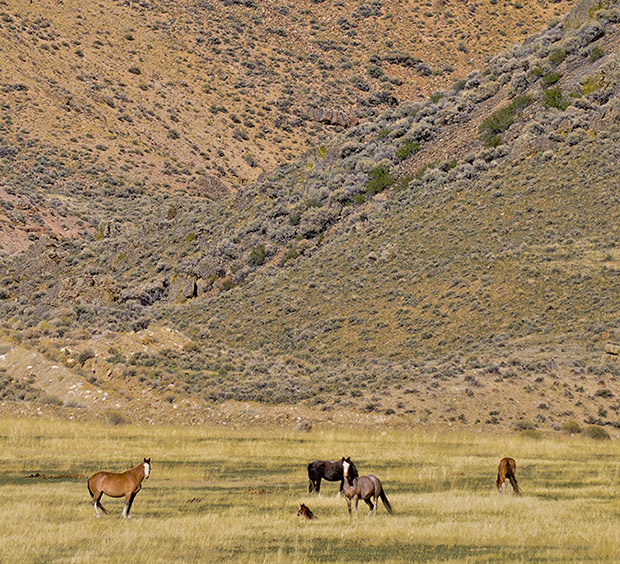