Have you come across any interesting wildlife news? March 30, 2012 It’s time to think about bears again

Public land thieves gearing up for another land grab try

The self-styled “sagebrush rebels” have never won any important victory in court. They have been repeatedly put down, but the idea that ownership of a fair portion of the West by the U.S. government is wrong or unconstitutional keeps coming back as soon as they see an opening. This year it was the Arizona and Utah legislatures that passed laws trying to seize the public lands, with rumblings in Idaho and other states.

This writer has been a “sagebrush patriot” from day one, back in 1978 when these “rebels” people first got organized.  I understood from my early teens that public lands meant freedom. Some landowner could not chase you off. I loved the outdoors and remembered the anger when somebody yelled, “you kids get off my land before I start shootin!” On the nearby Cache National Forest, I could go where I pleased. 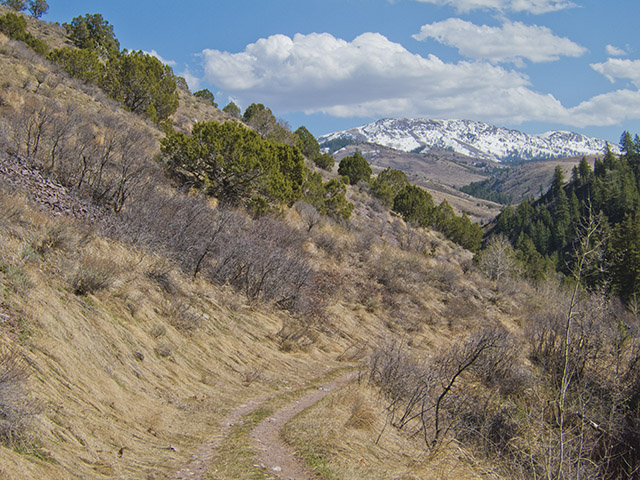 U.S. public land (Caribou National Forest, 10 minutes from Pocatello, Idaho). I spent 3 hours walking this trail March 31. It took me just twenty minutes to get there. There were no fees. It was free. Lots of other people (ten or so) were using the trail. The land belonged to all of us. Should we let the state of Idaho grab it and sell it? Ralph Maughan

Yes, the West is special, especially good in the minds of most because of this freedom to roam. The trouble is most people don’t understand that other states don’t have this freedom or don’t understand that it depends on the perpetuation of the public lands of the United States, as currently managed by the National Park Service, U.S. Forest Service, U.S. Fish and Wildlife Service, and the U.S. Bureau of Land Management (the BLM).  This lack of knowledge leaves them vulnerable to top down movements organized by the special interests to grab  the land.

These s “rebels” use abstract political arguments to advance their goals in public discourse. They almost never directly say are really after the national parks and monuments, national wildlife refuges and national forests.  Instead, they speak of “excess federal land,” or government lands “locked up from use.”  They don’t even use the word “public.”  Instead, they call them “federal” lands and say the states could manage them better than the “distant bureaucrats” in Washington.  They make that  argument despite any evidence. In fact, Utah and Arizona can barely keep their state parks open.  State Park fees are high.  We learned by sad experience that Arizona overcharges at their state parks.  This means they use them to generate money for the state general fund.  It does not go back to the state parks of Arizona.

More generally, the western states, except for Nevada, also have large tracts of state “public school endowment lands,” or just the “state lands.” The states were expressly given these lands by the U.S. government at statehood to support the public schools.  Most states sold all of them.  The Western states were given an especially big helping of public land to support the schools, belying the claim by Arizona and Utah that they were discriminated against at the time of statehood.  Visitors will find that the state lands are usually managed much more for extractive uses than adjacent U.S. public lands.  In many states, like Montana, you have to pay a fee to even enter these usually grazed out state lands.  In Wyoming you can’t camp on them without permission from the grazing permittee!  That is very far down the road to privatization.

If the states get their hands on any of these U.S. public lands, even national parks, privatization will come quickly, if only because they cannot afford to manage them.  Some will be auctioned, some given for “public” (actually private) purposes, many will become de facto private because the state will sell or give away all the access points to them. They will go to  the top 0.1%, and to friends of the governor on down the chain of elected officials, to big donors, etc.. The great national parks will likely be turned in commercial circuses and partly privatized for the mansions of the billionaires and the politically favored.

Seeing that the conservative majority on the U.S. Supreme Court no longer really believes in the time honored rule of followed precedent, we cannot count on the courts to rebuff previously unconstitutional initiatives from the states.  The West desperately needs a larger and  informed public  of sagebrush patriots.