A disgrace for the Salmon Challis National Forest

Basin Creek is a headwater tributary of the Little Lost River drainage in Idaho. It was home to bull trout and had a series of wet meadows which are in the process of eroding away and becoming biological wastelands.

Western Watersheds Project staff and supporters visited this stream in late 2008 along with the Salmon Challis National Forest District Ranger, Diane Weaver. It was in the process of severe erosion at that time and she was embarrassed enough to authorize an exclosure to keep cattle out of the stream. This is the photo that was taken that day. 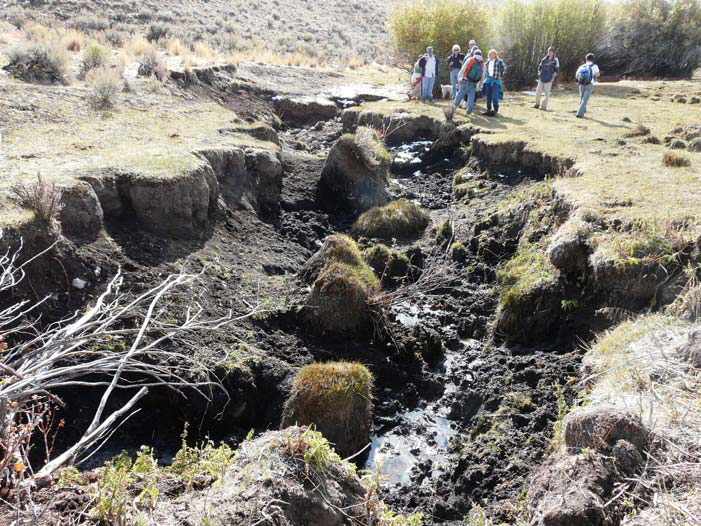 Over the weekend I, Brian Ertz, and his kids visited the same spot and found that cattle had been in the exclosure last year, as evidenced by the utilization of the grass and the numerous cow pies that littered the area. The stream had also cut an additional 5 feet down into the soft, riparian sediments that were deposited over centuries, and the head cut had moved higher up the meadow.

The stream and the meadow are dying. Sediments are eroding into the stream below and the head cut is moving upstream slowly but surely. The lower stretches of the stream are drying out because the water table is lower. Sagebrush is growing next to the stream and willows are dying. It’s a disgrace that is happening, and has happened, to countless western streams. 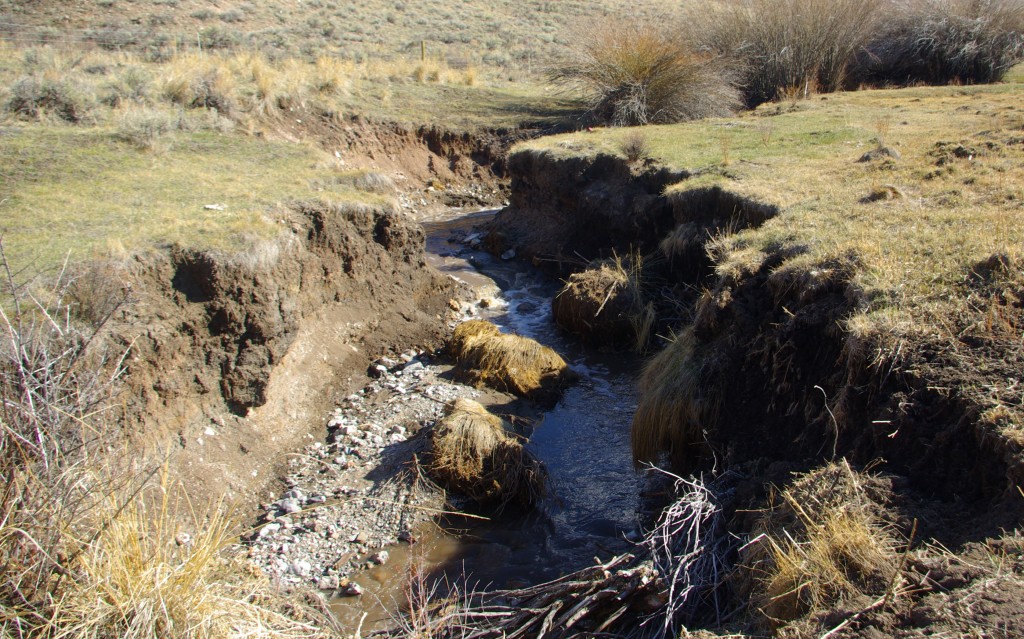 So often people and agencies advocate for these types of exclosures around sensitive stream areas but once they are built they fail to take another look. Exclosures usually end up turning into enclosures for cattle, and, rather than keep cattle out of an area, they keep them in because, frankly, it is exactly the type of area that cattle like to be.

It is not an uncommon experience for us to find exclosures that have had trespassing cattle or contain the offending animals themselves. It also not uncommon to see accelerated degradation occurring to these areas when they are not properly maintained or monitored. The fences keep other, native wildlife out and, in some circumstances end up killing sage grouse that collide into them. They don’t work, and agencies are foolish to depend on them.

The habitats that these exclosures are meant to protect are our natural heritage and they are actively being destroyed.

The case of Basin Creek is a little unusual because it has gone this long before being destroyed. Most streams reached this level of devastation long ago and have become completely dysfunctional on a biological level and a hydrological level.

It is frustrating to see, but there may be a solution to slow the irreparable harm and possibly reverse it. First, cattle need to be removed entirely from the allotment and not allowed to be anywhere near these important streams. Second, beavers should be actively encouraged so that the stream can regain some proper function and restore some of the vegetation and riparian soils.

This needs to happen now, not later. The bull trout in the Little lost River can’t wait for the complacent agencies to make these changes.

Wildlife advocates need to understand that livestock grazing doesn’t just impact wolves and other predators. It impacts the entire ecology of our western public lands. In the West, public lands livestock grazing is not just a problem, it is THE problem. These same advocates should understand that the tropic cascade caused by wolves doesn’t apply to livestock, but it needs to. No amount of kowtowing to the sheep and cattle barons of the west will bring tolerance for wolves but it will just serve to entrench them, and this kind of damage on our public lands.

You can view a slide show of the photos from Basin Creek below.