Lynx captured in Washington State. BLM Protections for Sage Grouse may not hit the ground for 10, possibly 20 years.

By Ralph Maughan On May 2, 2012 · 36 Comments · In Bears, Politics, Wildcats, Wildlife, Wolves, Yellowstone

In Yellowstone Park where the Gallatin Range rises there is some of the very best grizzly habitat.  For a long time grizzlies have also ranged about 10 miles north of the Park in this generally rugged mountain range.

The Gallatin Range ends near Bozeman, and now grizzly bears occasionally range into the forest area overlooking the fast growing small city. There is likelihood of human conflict with bears in the Gallatin Canyon which runs down the entire west side of the range with a lot of lodges and subdivisions and a crowded highway, and some bears will be hit on the highway as are hundreds of deer, elk, black bear and bighorn sheep every year.

The northern part of the Gallatin Range doesn’t have as much grizzly habitat as the southern, so the population there will probably never be large. 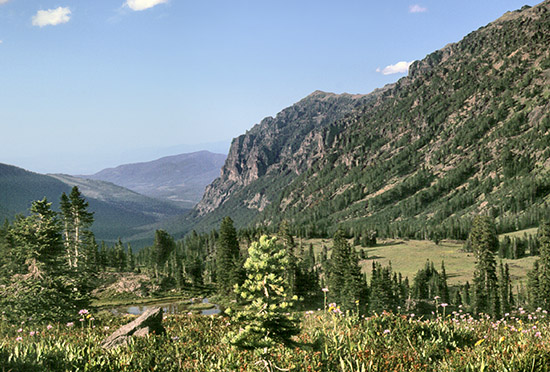 Hyalite Basin in the northern end of the Gallatin Range near Bozeman. Copyright Ralph Maughan

Meanwhile, Gallatin County commissioners are being influenced by some outside agitators and are currently devising a predator policy that has a very negative tone.  Folks in Bozeman, Belgrade, the Gallatin Canyon and West Yellowstone need to attend the two meetings being held. The first is on May 3. A second will be on May 30. Both are in the same place. The meetings will begin at 7 p.m. in the Community Room of the County Courthouse, 311 W. Main St., Bozeman.

Here is the May 4 story on the results of the Gallatin County large predator meeting. About 70 people attended.