“What changes the landscape?” BLM asks scientists,”but be sure to ignore the biggest cause!” Briefly noted wildlife news stories

By Barrie Gilbert On November 30, 2012 · 118 Comments · In Department of Interior, Grazing and Livestock, Public Lands

Washington Governor Christine Gregoire is rumored to be a front-runner for nomination as Secretary of the Interior, where she would oversee millions of acres of public land. But a livestock “pilot” program she instituted in Washington, which fast-tracked the introduction of livestock grazing on Washington Wildlife Areas free of charge to ranchers, while running roughshod over the concerns of agency wildlife biologists, should give wildlife advocates pause.

Memorandum of Understanding with the cattle industry 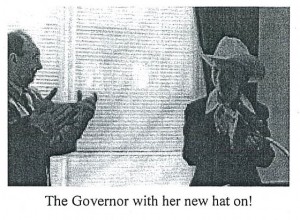 Governor Gregoire accepting an award from the Washington Cattlemen’s Association

Under Governor Gregoire’s tenure, in 2005 and 2008, the Washington Department of Fish and Wildlife (WDFW) signed and renewed a politically-motivated Memorandum of Understanding (MOU) with the Washington Cattlemen’s Association (WCA), to encourage livestock grazing on Washington’s Wildlife Areas. See the MOU.

The stated purpose of the MOU was to “facilitate the establishment of several pilot-grazing projects” by opening WDFW lands to livestock grazing, when many of those lands had not been grazed for many years. According to the MOU, the WCA was “interested in expanding opportunities for cattlemen to use public land for livestock grazing.”

Governor Gregoire took a personal interest in the development of the MOU, ordering her staff to complete it in order to develop a better relationship with the cattlemen after several months of private meetings with them, and attending a WCA convention to accept a gift of a large cowboy hat.

Unsurprisingly, introducing livestock grazing on Washington Wildlife Areas—which by statute, are to be managed for the benefit of fish and wildlife, not for economic return—proved to be disastrous both for the grazed areas and for the scientific integrity of the agency.

Introduction of grazing onto Wildlife Areas

The Asotin Wildlife Area is extremely steep, and home to a variety of wildlife and rare plants, as well as Snake River steelhead, chinook salmon, and bull trout, all protected under the Endangered Species Act. WDFW hurriedly strung miles of fencing in the Wildlife Area to create pastures for the re-introduction of grazing. Tragically, a worker was paralyzed in a severe fall while building the fencing. WDFW proceeded to dump the cattle in the area, free of charge to the ranchers, beginning in 2006.

WDFW’s biologists protested that the perfunctory grazing plans developed were based on political pressure rather than science; that the purported goal to improve fish and wildlife habitat would not be achieved; and that the number of livestock and degree of cattle use proposed were far too high and “not biologically justifiable.” WDFW’s managers repeatedly ignored the concerns, dismissing them as a “headache.” 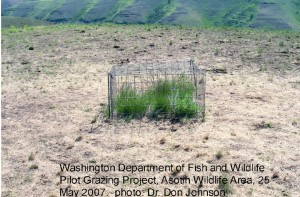 Sure enough, havoc quickly broke loose. Due to a “misunderstanding,” the rancher placed 200 more cows on the area than allowed. The cows proceeded to enter and damage creeks containing steelhead and salmon, despite promises that this would not occur. And grazing use quickly blasted past the levels recommended by the biologists. Despite WDFW’s promises that permits would be cancelled if violations occurred, WDFW simply permitted the rancher to move his cows to another pasture, where they quickly caused similar problems along a different creek. One wildlife biologist noted that areas near water tanks were “trashed, right down to the dirt.” Needless to say, the biologists agreed that the goal of “improving wildlife habitat” was not met.

Instead of heeding its scientists and pulling the plug, WDFW responded by doubling down on grazing and further committing $428,000 of taxpayer money in a four-year contract with Washington State University to monitor grazing damage—on top of the thousands already spent administering the free grazing.

The grazing was only halted after Western Watersheds Project successfully sued the WDFW for renewing the permit in 2009, arguing that doing so despite the serious harm to fish and wildlife was contrary to WDFW’s governing mandate to protect wildlife. The state judge’s ruling for WWP read, in part:

Quite frankly, as I began to review the record, I was quite shocked. The parts of the record designated for review contained very harsh criticism by the Department’s own scientists about grazing in the Asotin wilderness area. . . . There was nothing in the record that I found that showed that the prior grazing practices in this area had any benefit to any wildlife. I think I could categorically say there was no evidence that there was any benefit to wildlife. In fact, there had been harm to wildlife by overgrazing. . . .

Unless the Department had some idea that there was going to be no detriment or some benefit to wildlife, they, under their own mission, were in a position of being arbitrary and capricious in awarding the lease that they had no scientific evidence or no evidence to support. . . .

Similar environmental concerns were raised by WDFW’s “pilot” site in the Whiskey Dick Wildlife Area. This area includes potential habitat for the deeply imperiled (indeed, almost extinct) Columbia Basin Distinct Population Segment of Greater Sage-Grouse. Again, WDFW wildlife biologists protested about the political pressure they were under to rubber-stamp the grazing and how the agency was ignoring science, with one observing that “[i]f another public agency used the same tactics, WDFW would be screaming mad[,] and I find the current process unprofessional and embarrassing.”

Western Watersheds Project likewise challenged WDFW’s issuance of a permit in this Wildlife Area complex, with a different state judge finding that WDFW had unlawfully ignored the Washington State Environmental Policy Act in issuing the permit with no public process.

And so, Governor Gregoire’s bid to use Washington’s Wildlife Areas as a pawn to curry favor with the livestock industry largely fizzled out in the courts.

Other issues raise cause for concern as well. As discussed on this blog, WDFW recently presided over the killing of the entire Wedge Pack of wolves in north-central Washington.

And under her administration, Washington’s water quality standards for toxic pollution have remained among the least protective in the nation. EPA criticized the standard for not protecting human health, but Gov. Gregoire and the Washington Department of Ecology steadfastly refused to revise the outdated standard to protect people who regularly eat fish and shellfish from Washington waters. Caving to pressure from industries that benefit from lax pollution control, Governor Gregoire’s latest delay tactic was setting up a stakeholder committee to study the issue for one or two more years, while the people of Washington remain exposed to toxic pollution.

But perhaps most troubling for someone nominated to lead Interior– which includes some of the nation’s premier science agencies, such as USGS– is how her administration treated dissenting scientists within the WDFW during the pilot grazing program. Memo after memo from WDFW wildlife biologists referenced the intense political pressure they were under to approve the livestock plans, while upper managers consistently ignored or dismissed their concerns as a “headache.” We need to learn more about Governor Gregoire’s commitment to scientific integrity. Suppression of science should be unacceptable for an administration that has pledged an increased respect for science– a pledge which is in dire need of strengthening.