Do you have some interesting wildlife news? March 16, 2013 edition Your Chance to give Idaho Department of Fish and Game Commissioners a Piece of Your Mind

Allan Savory is a name not well known to most people concerned about climate change. However, he has been preaching his gospel of holistic grazing for a generation now and is somewhat loved by the Western livestock grazing industry, but not by other scientists in the field. Read, Cows Against Climate Change: The Dodgy Science Behind the TED Talk.

Last month he brought his message to an audience at a TED (Technology, Entertainment and Design) talk. He was warmly received. He had changed his usual message a bit, now not only to justify livestock grazing on arid and semi-arid lands, but also as an important measure to capture carbon that is being lost to atmosphere and forcing climate change. You should listen, but be prepared in advance to question his assumptions and facts.

Savory begins by speaking of the specter of “desertification,” which he says is the spread of bare ground into grasslands due to bad land use practices and also misconceived methods of restoring desertified lands — by removing livestock. Instead he advocates the use of more livestock(!) and at high density, but only over relatively small parts of the affected land for brief periods of time. Then the livestock are to be moved to another part of the degraded land for a short time, and so on. As all of us should, Savory comes down hard on the unmanaged year-round grazing of indefinite numbers of livestock. The surprise is, he says, that even more livestock, herded his way will restore grasslands — bare ground will fill with grass. He produced some photos to show the change using his methods, all in Africa where he developed his ideas.

Savory’s narrative is compelling if you accept his idea that deserts are but rarely natural. For him ground that is bare, without grass, is desert and desert is not natural. However, deserts are indeed natural, and they are not simply bare ground areas. Secondly, he believes that deserts and desertification are the same thing. They are not. In fact there is much dispute over the definition of desertification. Wikipedia says there are over a hundred definitions.

Deserts are indeed natural. They have existed for millions of years before any human influence. They have their own ecosystems, and they, like grasslands, can be degraded by human activity and in a sense be “desertified,” if one insists on using that word. Lands that have sufficient rain to support grasslands can be and are desertified by irrigation followed by salinization (salting) of the soil, direct human disturbance, repeated burning beyond the natural rate, and especially livestock grazing beyond the area’s meager capacity, or by grazing animals that differ from those that naturally (originally) grazed the area.

The huge Sahara desert was as dry and bare soiled at the end of the Ice Age as it is today. Twice since the Ice Age, changes in the monsoons (natural climate change) brought rains for a thousand or so years, but then 5 to 7-thousand years ago the rains receded and the desert returned. It changed from desert to grassland and back again apparently without human intervention or the presence or absence of livestock.

Today there is land degradation (desertification) around the edges of this greatest desert and much of it is human caused or aided. The same is true over almost all the planet’s deserts and their degraded margins.

The four deserts of North America are the Mojave, Great Basin, Sonoran, and Chihuahuan. They all have some grasslands within their borders, especially the Great Basin and Chihuahuan Deserts. Savory believes that grasslands are maintained by “proper” grazing — grasses evolved along with grazing animals, and lack of grazing destroys the grasslands.

It’s likely the grasses did evolve with grazers, but Savory also believes the grazers of importance were always large mammals. Further, he believes that sheep, goats, and cattle (the latter a completely human produced animal) acceptably mimic the departed wild grazers. This is not true. Over millions of acres of North America deserts, bison, elk, javelina, and pronghorn never roamed and never grazed the deserts or the patches of grassland within them. These deserts were and are grazed, but by small mammals like rabbits, mice, reptiles such as desert tortoise, and insects. Grasses that evolved being eaten by tortoises and rabbits are not likely to respond well to being eaten in intense, even if short termed, bouts of grazing by the artificially created cow, or Old World animals such as sheep, goats, or horses.

While deserts are characterized by some people to be only so much bare ground or moving sand, true desert is a complete and ancient ecosystem. Of course, moving sand, grit, salt or rocks do not store much carbon, but when the bare ground of North American deserts is not trampled, biological crusts form on top of almost all bare soil. In other words, they are not really bare. The crusts hold the soil in place and sequester carbon. If you are caught in a desert dust storm, head not for the disturbed soil but for the areas with crusts for your own sake.

U.G. Geological Survey (USGS) writes: “Crusts generally cover all soil spaces not occupied by green plants. In many areas, they comprise over 70% of the living ground cover and are key in reducing erosion, increasing water retention, and increasing soil fertility. In most dry regions, these crusts are dominated by cyanobacteria (previously called blue-green algae), which are one of the oldest known life forms. Communities of soil crusts also include lichens, mosses, microfungi, bacteria, and green algae.”

However, Savory doesn’t like crusts. He even calls them “cancers.” He thinks they suppress grass and that rain runs off of them, but it does not.

Every kind of desert develops its own assemblage of crusts. On ungrazed Great Basin desert near where I live (Pocatello, Idaho) every winter the crusts expand, grow, soak up moisture and nutrients, which are full of carbon. In the springtime, grasses and forbs grow right up through them, and they seemingly disappear to those who are not aware of their nature. These crusts are destroyed by trampling, but often come back after not too many years. 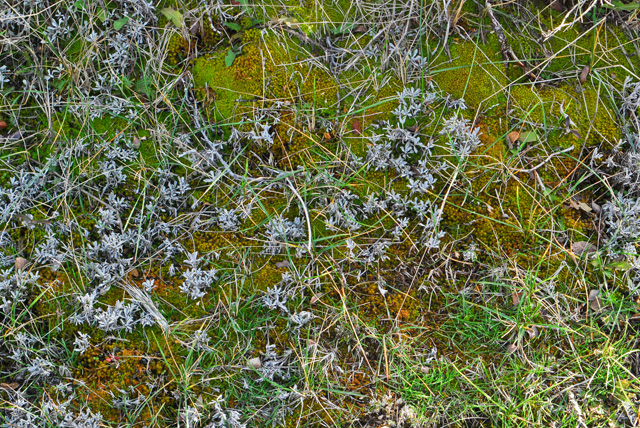 Lush Great Basin Desert biological crust with grass and forbs coming through on the foothills of the Bannock Range above Pocatello, ID. Copyright Ralph Maughan.

The crusts of the hotter and drier deserts are less resilent, and one footstep or cow print can destroy them for many years, even for more than a century. They retreat to live around the cholla, mesquite and thick creosote that livestock avoid.

While Savory shows some photos of lands that show little recovery even though livestock were removed (location not given), annual grasses can grow back quickly in some cases in hot desert. Consider below this photo I took in late February 2013 in Sonoran Desert National Monument near Phoenix, Arizona in an area that had been subject to relentless cattle grazing. 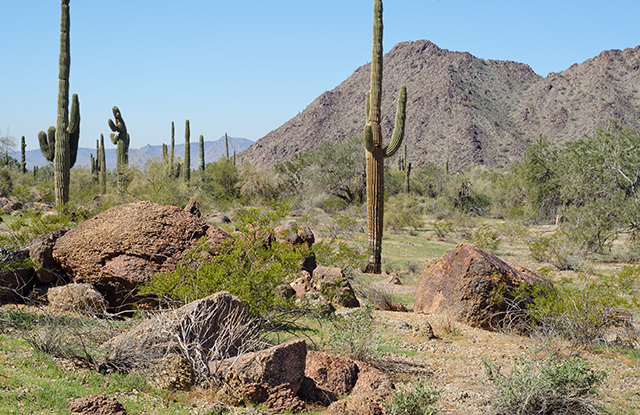 Unfortunately, in many places, especially the Great Basin Desert, recovery of degraded desert is complicated even more by the invasive cheatgrass, Bromus tectorum, from Eurasia. This annual grass grows very rapidly in early spring, ripening in late May or June. Then it is ready to burn. It greatly accelerates the Great Basin desert fire regime, destroying eventually all the shrubs and native grasses. The result is a cheatgrass monoculture that gives back all the carbon it drew from the ground and the air about every other year when it burns.

Cattle are able to eat the cheatgrass only briefly before it goes to seed. Grazing it does not even prevent it from setting more than ample seed. You can experiment with it yourself if you have some. Mow it, once or twice from when it begins to grow in early October and resumes growth in March. You will find its abundance undiminished next year. Unfortunately, removing cattle does not reduce the cheatgrass, but it might slow or stop its spread because the cattle are not eating and weakening the remaining native grasses in the area while they trample the cheat grass seeds into the ground and spread it to new places.

Conservationists, like many people, usually do not prefer the desert. They may see it as waste, fit only for bombing ranges and solar farms. The idea that we can almost like magic, green the desert and the degraded lands, by running even more livestock, albeit in a different fashion, sucking up greenhouse gases all the while, is a compelling and dangerous fantasy.

Degraded arid and semi-arid lands can sometimes be restored, especially if there are still native seeds in the soil and few invasives, but the best we can probably do in the current situation is try to protect what we have and confine pastured livestock to the humid fertile, open areas where the grasses really do respond favorably to proper levels of grazing.

Arid places on the planet just do not produce that much annual biomass. However, they can slowly sequester large amounts of carbon. It is very important that this carbon storage not be squandered trying to produce livestock.