This month Pyramid Lake was an undiscovered pool of beauty, at least to me and my spouse. We just spent three days at this amazing place. We finally saw the big Lahontan Cutthroat after a loud splash alerted us inside our truck while we parked on cliff almost a hundred feet above the Truckee River delta into the Lake. They were a bit hard to see at first. They looked like logs floating upriver.  The New York Times just did an article on the growing comeback of these potentially and now actually, big trout.

Pyramid is a big Great Basin lake on the edge of the desert. It collects and keeps all the water of the Truckee River that isn’t diverted for agriculture.  Thousands of years ago, the place it now occupies was the deepest part of  Pleistocene Lake Lahontan (900 ft.) which covered much of western Nevada.  Today its largest remnant, Pyramid Lake, is still over 300 feet deep in places. The Great Basin itself is large area in Western North America defined by having no rivers that run to the ocean or connect with outside rivers. All water drainage is internal. 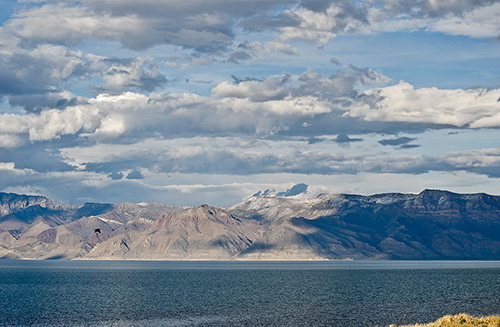 In the ancient, almost-sea Lake Lahontan,  a huge sub-species of the cutthroat trout evolved — the Lahontan Cutthroat. When the West was taken and settled, Pyramid Lake and its big trout (by legend up to 60 pounds) remained  as well as did the endemic Cui-ui (Chasmistes cujus) sucker, which can range up to 7 pounds.

Nevada is a dry state, but many early residents of the state were enthused with the idea represented by the federal Bureau of Reclamation where the government would build dams and diversions to create irrigation projects to “reclaim” the desert. Nevada representative to Congress Francis Newlands championed the Bureau’s creation, and one of its first projects was the Newlands Project that diverted a large part of the Truckee River into a reservoir, ironically named “Lahontan.” From there water was  furnished to desert irrigation projects, creating a fair amount of farmland around Fallon, Nevada.

Pyramid Lake quickly began to fall and soon the Cui-ui and Lahonton Cutthroat Trout were in jeopardy  The later became extinct in the lake when it could no longer run up the now shallow Truckee to spawn. Its demise was  aided when and other species of trout, such as rainbow and lake trout were introduced, adding disease and species not well fit for the slightly saline lake. 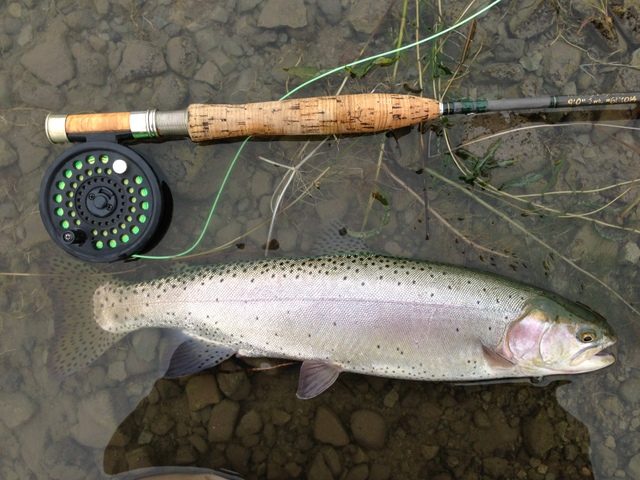 Fortunately some of the Lahontan trout remained in a few other remnant Great Basin lakes such as Independence Lake, California.  In the 70s Lahontan strains from some of these sources were reintroduced to Pyramid Lake and they grew to a moderate size, up to ten pounds.  However, the giant Lahontan variety was extinct, or so it seemed.

Pilot Peak is a tall (10,719′ (3,267 m)) and steep landmark on the Utah-Nevada border, overlooking the Bonneville salt flats. The flats were formed when the second great Pleistocene Great Basin Lake, Lake Bonneville, dried into remnant Great Salt Lake, which is too salty for fish. 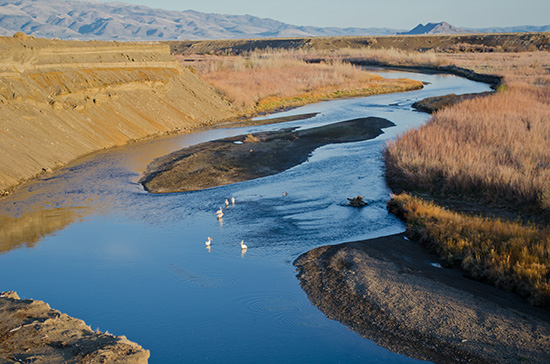 This peak, surrounded by desert and so steep, seems like an unlikely place to find some of the original Pyramid variety of Lahontan Trout.  Surprisingly though, small Lahontan trout of the thought-to-be-extinct variety were discovered in a small creek on the mountain. Some were taken, and just in time, because a wildfire has since cooked the creek. They were planted into Pyramid Lake in 2006 and already a 24-pounder has been caught. 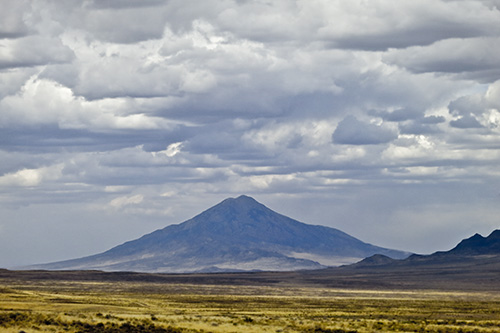