West Yellowstone, MT.  Last weekend the Greater Yellowstone Coalition celebrated the 30th anniversary of its founding back in 1983. Along with honoring the founders, especially activist Rick Reese, and former Board members, the Coalition (GYC) had a prime time panel consisting of  Yellowstone Park superintendents. They were current superintendent Dan Wenk, and two of the three past superintendents Mike Finley and his predecessor Bob Barbee. Suzanne Lewis, who preceded Wenk did not attend.

Barbee and Finley had plenty to say. Wenk, due to his relative newness and likely too being under the constraints of office, said less.

The grizzly population has increased by perhaps 300% during the long period it has been on the list. Current estimates are from about 600 to 800 grizzlies in the GYE. The GYE includes the 2.2 million acre Yellowstone Park and perhaps 18 million more acres of surrounding land, mostly public land managed by the U.S. Forest Service, USFWS, BLM, Park Service, and state agencies. In addition, there are significant acreages and areas of private land within the GYE where grizzly bears now live. The area occupied has been expanding, likely due to the decrease in food quality within the core of the GYE.

Finley particularly focused on the collapse of two of the main sources of high quality food in the grizzly bear diet and threats to the third — the army cutworm moths which arrive in the billions at alpine elevations in the summer. The near demise of whitebark pine nuts and Yellowstone cutthroat trout took place during, rather than before the time the grizzly has been on the threatened species list. 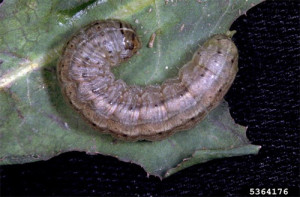 Finley pointed out that there is almost no scientific knowledge of the geographic life cycle of the army cutworm moth which exists as an agricultural pest in the midwest. The newly hatched moth then arrives at the flower fields of the alpine peaks at about 11,000 feet during the Yellowstone country summertime. In the areas where the larva live — the army cutworm caterpillar — strenuous efforts are made to eliminate it due to crop damage.  Success would save crops but greatly harm the grizzly, it would seem. 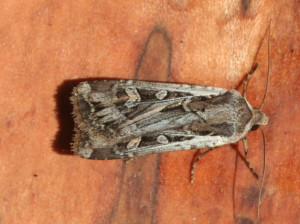 The army cutworm moth which is terrific grizzly bear food which might provide 40,000 calories a day. Phtoo from maine,gov

The formerly very abundant Yellowstone cutthroat trout has been reduced in numbers manifold by the artificial introduction (accident?) of the voracious lake trout which eats the cutthroat, and is useless to bears and many other kinds of wildlife because it does not come to the surface or run up the rivers and creeks to spawn.

Earlier efforts by USFWS to delist the Yellowstone grizzly were overturned by a federal judge on the very issue of the availability of food. Finley said that the USFWS’s latest bandwagon for delisting was sure to crash on this issue again. Twice he told the audience that sometimes lawsuits by groups are needed. He stopped short of saying “The GYC must sue on this issue,” but his meaning seemed obvious.

The 2007 case that overturned the earlier grizzly delisting was the Greater Yellowstone Coalition v. Servheen. The GYC won in district court on a summary judgment.  In summary judgments there is no contest over facts — both sides agree. It is only a matter of law in contest.

The government appealed their loss to the ninth circuit. They lost again there, but not as badly. The ninth circuit reversed the lower court on the matter of inadequate regulatory mechanisms. Given what has happened to the delisted wolf, that part of the appeals court decision is troubling. Conservationists believe adequate regulatory mechanisms clearly don’t exist, as seen in the current grizzly shootings in Island Park (see our current story on those).  The ninth circuit did uphold the district court’s decision that the USFWS failed to provide a rational explanation for why the potential decline in whitebark pine would not threaten grizzy bears.